A quiet place, a loud theater

If you're looking for the typical paranormal, blood-gushing horror movie, A Quiet Place would be a waste of your time. A Quiet Place is a horror film in a class of its own; it is able to evoke emotions of both sheer terror and absolute adoration from the audience.

Directed by John Krasinski, A Quiet Place tells the story of a family struggling to survive in a post apocalyptic world where everyone is in danger of being hunted by monsters with overly sensitive hearing. Lee Abbott (John Krasinski), his wife Evelyn (Emily Blunt), and their three children Regan (Millicent Simmonds), Marcus (Noah Jupe), and Beau (Cade Woodward) scavenge from town to town, desperately searching for supplies to make ends meet. Over the two years that the movie takes place, Evelyn becomes pregnant, and the rest of the family struggles to find a way for her to give birth without attracting the monsters. 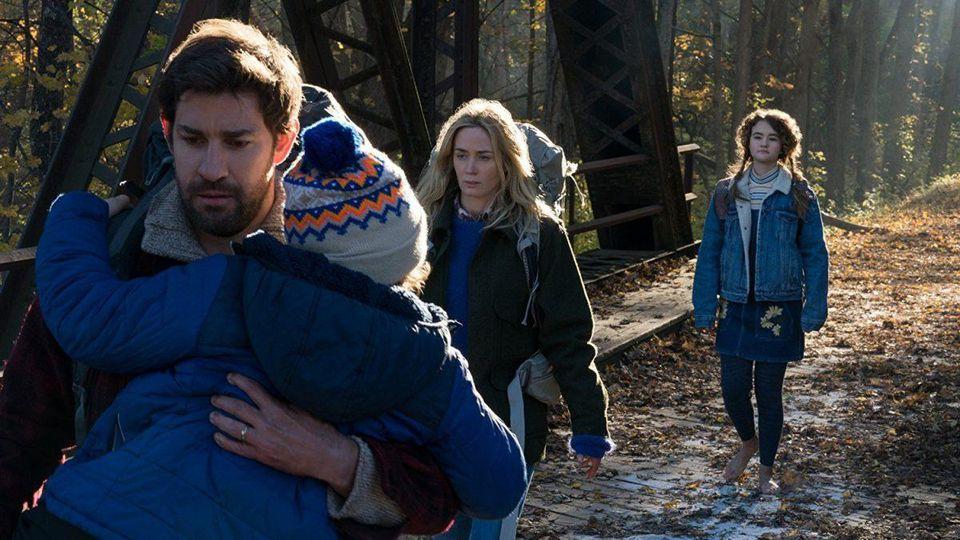 Photo: A Quiet Place will stun its audience with its sound editing, acting, and plot.

Photo: A Quiet Place will stun its audience with its sound editing, acting, and plot.

From the very beginning, Krasinski captures his audience's attention with stunning visuals. The first scene opens as the family scavenges a drug store in search of supplies. Krasinski haunts the audience with stunning silhouettes of the family members, while he places the camera at just the right angle so that the audience is in sheer terror as a close up of a can falling off of a shelf makes noise. Although the audience does not yet know of the monster's existence, the shots makes the audience revel in fear; anyone would guess that the falling can was bad news.

While A Quiet Place undoubtedly touts strong visuals from director of photography Charlotte Bruus Christensen, the movie's true strength lies in its sound engineering. Each featured noise is purposeful. The sounds in the movie are so faint that those in the audience will be too afraid to munch on the overly expensive popcorn they bought. The soothing sounds of the family tiptoeing on the sand contrasts with the sound of rustling leaves from approaching monsters, but the true strength of the movie's sound lies in the few moments where the audience is petrified by the screams of the family.

One of the more sobering points of the movie is the acting. After playing Jim on The Office, Krasinski finally manages to shift his image as a serious actor as Lee. Meanwhile, Emily Blunt's performance as Evelyn is just as absolutely stunning; her ability to play a loving mother, then a miserable birth giver, to a fierce warrior in a matter of minutes is transiting. As Krasinski's real-life wife, their on-screen chemistry is just as believable. Deaf actress Millicent Simmonds steals the show with her wide range of emotions playing Regan, the Abbotts' deaf daughter.

Despite being a successful horror film, A Quiet Place's true message is as a family drama. At its core is the story of two parents willing to go to whatever lengths necessary to protect their children.

A Quiet Place is a horror film that is the first of its kind. Not only are the technical details of the cinematography and the sound engineering exquisite, but the movie succeeds at capturing the audience's attention and making them question the lengths that they would go through to protect their own family.

"A Quiet Place" is rated PG-13 for terror and some bloody images and is now playing in theaters everywhere.