Teacher firings are necessary to save D.C. public schools

The D.C. public school system (DCPS) faces a long list of obstacles standing in the way of improvement, chief among them $40 million in budget cuts. This financial deficit has led to the mass firing of more than 200 schoolteachers, according to the Washington Post. Despite major criticism and recent accusations that the firings were illegal, Chancellor Michelle Rhee's bold action was necessary to institute change in a school system that desperately needs drastic intervention. 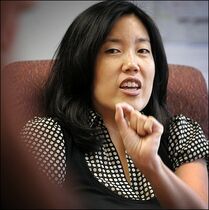 DCPS is generally viewed as a struggling, inner-city public school system with low student test scores. Progress is hindered by a lack of supplies and inadequate financial support. Since 2006, less than 50 percent of students in the district have tested as proficient in math and reading, according to DCPS. The school system has also consistently been unable to provide students with school supplies such as calculators or computer access.

But more than inadequate facilities or funding, unqualified teachers pose a huge barrier to student success. Recognizing an existing budget shortfall, Rhee has taken the unfortunate but necessary step of releasing hundreds of DCPS teachers. Rhee has justified the release of these teachers by stating that they either lacked proper training or exhibited poor job performance.

"The 90-day plan," a policy developed by former DCPS leaders and officials that works to improve teacher performance, has existed for a number of years. According to the plan, a principal can fire an underperforming teacher as a last resort. Before Rhee became chancellor in 2007, an average of 15 teachers were placed on the plan annually. Today, about 150 teachers are on the plan.

When DCPS teachers are placed on the plan they are given a "helping teacher," who assists the teacher and gives him or her a last chance at improvement. Only if these plans fail are teachers in a position to be fired. Rhee has clearly fought for the jobs of DCPS teachers and her implementation of "The 90-Day Plan" has demonstrated her willingness to cooperate with teachers by giving them the chance to improve.

Although the Chancellor has released hundreds of DCPS teachers, Rhee can relate to the daily struggle these teachers face in the classroom. As a former elementary school teacher in Baltimore, Rhee has experience working in a struggling school system. Since Rhee took her position as Chancellor, reading and math scores from elementary, middle and high school students have all increased. Almost half of all DCPS elementary school students are proficient in reading and math, and middle school and high school scores have shown to be up three to four percent, DCPS reports. The achievement gap between minorities and white students has also shrunk by 20 percent, according to DCPS.

Now in her third year as Chancellor, Rhee is influential. She has closed more than 20 inefficient schools and has hired new, more effective principals. More importantly, she is rational. She has proposed a plan to teacher unions that could allow teachers to earn more than $100,000 annually if their students show improvement. In order to be placed on this plan and earn this salary, teachers must first comply to a one-year probation period where they will be scrutinized and assessed. Once a teacher makes it past a year on probation, he or she can be eligible for performance-based pay.

Due to her past work, several years of experience and willingness to cooperate, Rhee's plans for DCPS will be in the best interest of the school system. Yet Rhee's decision to fire so many teachers does present its difficulties. There is the overarching fear that releasing this many teachers will lead to larger class sizes. The question of whether DCPS will financially benefit from the decision to fire so many instructors also remains - especially when Rhee plans to pour money into activating performance-based pay for efficient teachers.

Though the release of so many teachers is a last-resort option for saving DCPS, the future of the public school system depends upon it. Mass firings are obviously not ideal; however, in order to save DCPS, it is clear that Rhee has fully considered all of her other options. Closing down schools with minimal student attendance rates is not the way to salvage the school system or help to fix the tremendous financial deficit DCPS faces. Rhee did what she had to do and DCPS students are fortunate that she is willing to put in all of her effort to fight for the school system.