Sure, Spiderman is a wall crawler worth fawning over, and Wolverine is everybody's favorite Canadian with indestructible metal claws, but these classic graphic novel characters have aged considerably since their creation in the 60's and 70's, and new ones are desperately needed. This is when Brian K. Vaughn has stepped up; he superbly fills in the hero void with his three dimensional characters in the Marvel comic "Runaways" based in Los Angeles with cleverly re-invented superheroes. 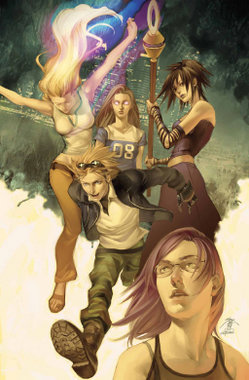 Following the typical Marvel concept, unsuspecting everyman suddenly develops powers, "Runaways" introduces six teens who are thrown together by fate and forced to grow up too soon. Recently, Marvel published the first eighteen issues of "Runaways" in a compilation that tells of the groups' birth, when they accidentally discover that their parents are actually villains intent on world destruction. Using their powers that they have inherited and technology that they have stolen, the Scooby gang embarks on cleansing L.A. of not only of their parents, but also all villains that haunt the city of Angels.

Before any of the teens were born, their parents, who form a group called the Pride, made a deal with the supernatural sinister beings named the Gibborim. In exchange of a promised place in paradise, they would help destory the world. However, when their children accidentally see the parents killing an innocent girl, the children decide that it is up to them to unite and rid the world of their wicked parents. While some comic works might unfavorably stick to portraying a squad of oblivious adolescents trying to do right, "Runaways" how these youths cope with growing up without any parental guidance.

Vaughn creates characters that could easily be transferred from paper to real life with amazing grace and ease. While physically his characters look like typical teens, there is more going on under the surface as shown by Karolina Dean, the daughter of two movie stars who discovers that she is an alien with incredible powers. While there are only six main characters, uncharacteristically small for Marvel comics such as X-Men, "Runaways" spends a considerable time developing each character's complex past. Vaughn's sturdy character study of each teen-hero makes it easy for him to create a lovable cast of characters with hangups and unique personalities that a reader will immediately fall in love with. Together the team fit together like a puzzle, albeit with their fair share of missing pieces.

Illustrated by a newcomer in the comic world, Adrian Alphona, the art in "Runaways" is fresh and creative; as a result, Alphona's work is unique and much welcomed, making "Runaways" stand as both a comic and work of art. Alphona's art is realistic and specific, including various details that showcase Alphona's meticulous efforts.

While the art in any comic is important, so is the script. Vaughn makes the script casual and relaxed, making the dialogue appear natural. Vaughn also scatters jokes through the comic to make it funnier and more light-hearted, while still focusing on the overall theme of parental control

Additionally, "Runaways" include many references in the text that weaves richness and complexity into Vaughn's comic. These references, such as ones that pertain to culture like "Lost," Joss Whedon and more serious issues like the 2002 snipers and Rodney King, add a unique touch to the comic, making it seem more realistic. Vaughn also commonly includes 60's and 70's culture such as "The Beatles" and "The Who," even naming one of the story arcs "Teenage Wasteland" after the 1971 song by "The Who."

Initially, "Runaways" was only going to be 18 issues. But when fans cried out as the popular series neared completion, Marvel decided to extend the series. Vaughn even received a letter from Whedon, creator of cult classic "Buffy the Vampire Slayer" and popular comic series "Astonishing X-Men," imploring him to keep the series going. Although Brian K. Vaughn's motley collection of outcast runaways are forced into adulthood too soon, teenage fans can find a child-like delight in his creative works.