A rusty "Saw" doesn't cut it

Horror flick lacks the thrill and originality of predecessors

"Saw" was brilliant. "Saw II" was enjoyable. "Saw III" was captivating. "Saw IV" is, at best, disappointing as a part of the series and even worse as a stand-alone movie. The once gripping psychological thrills have fallen to mediocrity, and the franchise has been reduced to a jumbled mess of disjointed plotlines.

John Kramer (Tobin Bell), the original Jigsaw and his apprentice Amanda (Shawnee Smith) are now dead, but the games are far from over when yet another Jigsaw apprentice surfaces and throws Commander Rigg (Lyrig Bent), a reckless and impatient cop, into a series of disturbing tests. As Rigg plays through the new Jigsaw's deadly and demented game, a determined FBI Agent Strahm (Scott Patterson) and his partner Agent Perez (Athena Karkanis) follow the trail of bodies on a trail to solve the grisly deaths. 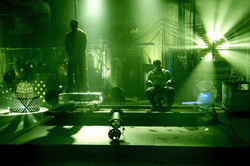 Photo: Two police officers' lives hang in the balance in another one of Jigsaw's complex traps in "Saw IV." Photo courtesy of Screen Gems

Photo: Two police officers' lives hang in the balance in another one of Jigsaw's complex traps in "Saw IV." Photo courtesy of Screen Gems

"Saw IV" attempts to continue off of the storyline of the earlier episodes, but a plethora of newcomer characters and side stories makes for a forced and convoluted mess. Kramer's transformation into the original Jigaw, ex-wife Jill's (Betsy Russell) interrogation and his lawyer Art's (Justin Louis) history are just a few of these stories, all part of a vast sea of flashbacks. The flashbacks are so numerous that it is easy to get lost among the multiple story lines. It may not even be clear to the audience that "Saw IV" takes place at the same time as "Saw III." Not only does the movie leave many questions from the previous installments unanswered, but it creates a whole new slew of them to untangle.

As a general warning, the movie is filled with gruesome scenes which border on NC-17 material from beginning to end. Although the gratuitous carnage may be just what some viewers are looking for, "Saw IV" takes a turn for the worse by trading the series' trademark gripping psychological thrills for all-out-in-your-face brutality. Opening with an entirely unnecessary, profusely bloody autopsy, "Saw IV" seems to lose the exhilaration that made its predecessors so much more enthralling.

"Saw IV" is the first of the franchise which "Saw" original creators Leigh Whannell and James Wan did not write or produce. After three movies, the grainy flashbacks, quick choppy camera movements and slow blurring just do not cut it anymore. "Saw IV" attempts to mediate this by adding even more of the same, only making the movie even more confusing. "Saw" desperately needs Whannell and Wan to save the series from the failed formulas that plague the average horror film.

Fortunately, the "Saw IV" experiance still offers an extensive array of inventive and grisly traps. Individually, many scenes from the movie are well worth watching. Compared to most horror movies, the acting throughout the film was believable given some of the ridiculous parts that the actors had to play. Ultimately however, the film just does not piece together well, especially in its short 95 minute play time.

Although the plot is unpredictable and the twists and turns keep the audience guessing, the story simply goes nowhere and falls flat in the end. The entire movie feels like one giant teaser for the apparently inevitable "Saw V." Fans of the "Saw" series might still enjoy this one. Everyone else should steer far clear.

"Saw IV" (95 minutes) is rated R for sequences of grisly bloody violence and torture throughout and for language. It is now playing in theaters everywhere.