The stage is dark, the tension in the audience high. A loud thwack echoes across the stage, the lights flashing on, revealing a prominent figure dressed in rich robes, smiling triumphantly. So goes Robert Bolt's classic tale of faith, God and honor, "A Man For All Seasons," recently performed at the Church Street Theater by The Keegan Theater production group.

Directed by Susan Marie Rhea, "A Man For All Seasons" depicts the famed Sir Thomas More (played by Tim Lynch), the man who stood for what he believed in, even against the threats the of the reigning king Henry VIII (played by Jon Towson). 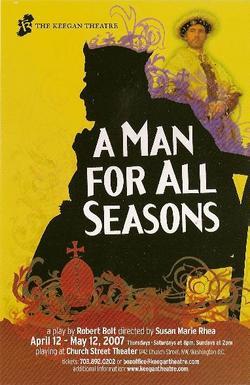 Man For All Seasons

Photo: "A Man For All Seasons" is currently playing at the Church Street Theater located near Dupont Circle.

Photo: "A Man For All Seasons" is currently playing at the Church Street Theater located near Dupont Circle.

The play opens as More refuses to tell the king that his previous marriage, which produced no heirs, was illegitimate, pulling More and his family to the brink of disaster.

Melissa-Leigh Douglass and Mark Rhea stand out in their roles as Margaret More, Thomas's daughter, and Cromwell, More's rival, respectively. Douglass portrays the martyr's conflicted and stricken daughter with conviction and grace, making the audience feel a variety of emotions, from sadness to pity, for the More family's position. Rhea's character is distinct in his dutiful sense of power and morality, shown through Rhea's powerfully voiced lines; his mixed accent adds an intriguing layer to his character portrayal.

Despite the small size of the theater, the set, designed by George Lucas, makes the most of the space constraints by employed multi-purpose props. A simple table plays many roles, from a bar to the table in More's house be altered to reflect their changing social status. Other such props are the set's three chairs, which represent both the throne of the rich and the stool of the damned.

Unfortunately, "A Man For All Seasons" cannot be easily understood at all times and by all people. Viewers unfamiliar with British history and Tudor conflicts will quickly find themselves lost amidst the references to religious conflicts and political wills. However, the Common Man (played by Robert Leembruggen) prevents too much confusion by breaking up scenes with humorous dialogue and explanation.

While the playbill proves that the cast all possess a full and detailed experience in acting, several times cast members seem to falter and repeat lines, primarily Lynch who occasionally paused on his lines. Whether this was due to nerves or inadequate practice, the effect is one of poor preparation and decreases the play's power, breaking the flow of tense and crucial scenes.

Even though the Keegan Theatre's production of Bolt's classics contained minor faults, the final result is one of intense power and suspense. Fans of political intrigue and puissant dramas alike will find something to appreciate in "A Man For All Seasons," whether it's the eclectic cast, the dynamic set or the involving acting.

"A Man For All Seaons" is being performed at the Church Street Theater, located near Dupont Circle, until May 12. Ticket prices start at $25, but reduced prices are available to students and senior citizens.