Legacy advantage is a practice used in the college admissions process which gives a boost to the applications of students who are related to alumni of that college or university. It is often claimed by admissions officers that legacy is only taken into consideration when choosing between two equally qualified candidates, as it says on Harvard's admissions website, "Among a group of similarly distinguished applicants, the daughters and sons of Harvard College alumni/ae may receive an additional look."

However, it is clear from the admissions statistics that legacy advantage goes beyond just giving a candidate that extra little push. This policy has actually been instrumental in maintaining the children of the white wealthy donor class as the majority of the student population in many highly selective schools.

This year, Harvard's freshman class is just over 29% legacy and 29% of Yale admits are related to someone who attended that same university.

According to the New York Times, legacy advantage has contributed to the fact that in 38 colleges in America, including five in the Ivy League – Dartmouth, Princeton, Yale, Penn and Brown– more students came from the top 1 percent of the income scale than from the entire bottom 60 percent. 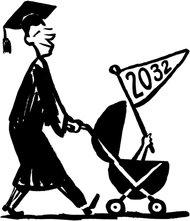 Photo: The legacy admissions policies at highly selective colleges give huge advantages to students whose parents attended those schools.

Photo: The legacy admissions policies at highly selective colleges give huge advantages to students whose parents attended those schools.

How can America claim to be a meritocratic society, allowing anyone to succeed if they work hard enough for it, if it allows these institutions of higher learning, golden tickets to future success, to blatantly favor the applications of those already in the upper class?

According to UC Berkeley Professor Jerome Karabel's "The Chosen: The Hidden History of Admission and Exclusion at Harvard, Yale, and Princeton", legacy advantage began in those three schools as a way to keep away high achieving immigrants, mainly eastern European Jews, who were deemed, "unacceptable to the Anglo-Saxon gentlemen who presided over the Big Three (as Harvard, Yale, and Princeton were called by then)."

To this day these special admissions considerations have continued, though nowadays admissions officers claim that legacy is a factor only taken into account when deciding between two equally qualified candidates. However, new data implies that legacies applying to highly selective universities have been admitted despite lacking in scholastic achievement. A recent study from Princeton University found that being a legacy is the equivalent of an extra 160 points bonus on the SAT in benefit in the admissions process of highly selective schools.

These legacy applicants, a majority of which are white and within at least the top 20% economically, are able to enjoy many advantages in American society that the other 80% are not. Even then, when they score lower on important tests than their peers, colleges still look at them favorably, offering them advantages in acceptance to highly selective institutions.

Photo: Despite increases over the years in affirmative action programs to increase the diversity of highly selective colleges, they have remained staunchly majority white, partially due legacy advantage in admissions.

Photo: Despite increases over the years in affirmative action programs to increase the diversity of highly selective colleges, they have remained staunchly majority white, partially due legacy advantage in admissions.

Most who defend the practice of legacy advantage argue that because it pushes wealthy alumni to give back to these private schools, it allows the schools to admit lower income students who can't afford to pay tuition. Naomi Shaefer Riley wrote for Bloomberg View that, "private schools need money, and wealthy donors are the ones who ensure that schools are able to give a lot of financial aid, go need-blind, or offer free tuition to families whose incomes fall under a certain threshold."

This theory of "trickle-down admissions" is not only misguided in that it is most likely in violation of the law, it is also simply false. According to researchers at Princeton who studied the relative admissions advantages of legacies, minorities and athletes, "There is no statistically significant evidence that legacy preferences impact total alumni giving."

Furthermore, based on the "trickle-down" logic, one might think that with this policy in place along with the various affirmative action policies of these selective institutions, minority presence in these universities would be shooting upwards, or at least on the rise. However, according to data collected by the New York Times, "Blacks and Hispanics are more underrepresented at top colleges than 35 years ago."

Legacy advantage is nothing more than a poorly disguised scheme by people at the top to keep themselves and their future generations at the top, without care for those they trample underneath their feet. It undermines the ideal of individualism upon which this country was founded and needs to be abolished by any means possible.