In the national television industry, crime-based shows are considered especially brilliant. On NBC, the elite and dedicated man who creates these shows is known as producer Dick Wolf. This is his story. 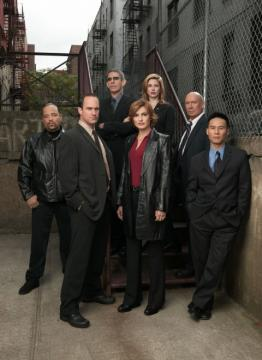 Photo: The show's cast. From myspace.com

Photo: The show's cast. From myspace.com

Unlike typical crimes shows, "SVU" offers interesting and realistic histories of the characters, providing depth and depicting them as more than just typical police officers. Detective Olivia Benson (played by Mariska Hargitay) exists as the result of a rape and has no knowledge of who her father is. Naturally, she is inclined to catch rapists, though Olivia commonly finds herself attached to the victims who bear resemblance to her mother. Detective Elliot Stabler (Christopher Meloni), the seemingly conflicted and jaded cop, is a father of four who will go to any lengths to protect his children. While having a show that features a cop with children is not unique, Stabler is a warm and caring father that provides a change from the heinous crimes that the SVU officers investigate.

While some members of the "SVU" audience feel that "SVU" episodes share similar plots, they are in fact extraordinarily varied. More intricate plots often radiate from a vague event falling under the "Special Victims Unit's" jurisdiction. One thought-provoking episode, for example, focused on a 17-year-old girl in a sexual relationship with a man in his thirties. What made the plot so unique was that the teenager suffered from a genetic abnormality called Turner syndrome, which causes her to develop physically much slower than normal, making her appear physically 12 years old. In the episode, the judge must decide if the 17-year-old can live with her boyfriend, who may only be attracted to her for her child-like looks.

What makes the show interesting is that way it enters the mind of the criminals and shows how their crimes are influences by their past. While the criminals are occasionally nothing more than mentally unstable men or women, their past provides an interesting, albeit not unique, insight into the show that other crime shows fail to offer.

"Law and Order: SVU" airs at 10 p.m. on Tuesdays, but those faint of heart may want to consider carefully whether they are up to watching the graphic and disturbing images included in the show. The show often features rape or molestation victims who tearfully recall the details of their experiences.

Although "Law and Order: SVU" is entering the eighth season on NBC, it still manages to pull in viewers who are bored of the typical crime show. Even though "SVU" is a spin-off, it still remains fresh and interesting.