In the German movie "Downfall," just released in the states, veteran actor Bruno Ganz takes on a particularly difficult role: Adolf Hitler. The film covers the last moments of Hitler's life as he furiously tries to keep his army and his empire together. 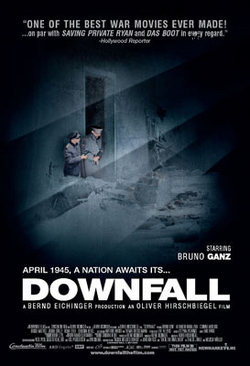 Photo:
Few movies tackle the onerous job of trying to portray Adolph Hitler. In World War II films, he's alluded to, or heard as a hysterical voice on the radio or animated figure on the T.V., but rarely do films bring us up close to the man who attempted to take over the world and caused the deaths of millions of people.

The story of Germany's downfall is told through young Traudl Junge, Hitler's real life secretary (Alexandra Maria Lara). Hopeful and beautiful, Junge goes against our stereotyped view that all Nazis were cold monsters. Employed because she believed in Hitler's glorious vision of a perfect future for her country, Junge doesn't fully understand all the workings of the Nazi government and is scared by the increasingly outrageous behavior of her beloved Fuhrer.

Life for Junge and her companions becomes increasingly challenging as they are forced to move into a bunker in Berlin because of the approaching Soviet army. Hitler's mood swings between hope for his people and utter despair; at one point, he even receives instructions from a doctor on how to best commit suicide even after he had just given an uplifting speech to his second-in-commands.

Ganz is amazing as Hitler. It must be difficult to play a man who is so often cast as the embodiment of evil, especially in situations that call for him to be loving around his nieces and nephews and his girlfriend Eva Braun (Juliane Kohler). Ganz perfectly captures Hitler's descent into utter madness as he realizes his hope for a genetically perfect world, one free from anyone except Aryans, is lost.

Other amazing cast members similarly find a balance between the horrendous actions of their characters and their human qualities. Corinna Harfouch, as Magda Goebbels, a staunch believer in the Nazi party, desperately loves her children to the point of methodically poisoning them all before the Soviets arrive. She explains that she doesn't want them to live in a country without a Nationalist party before she and her husband take their own lives. Other Nazi leaders are so deadset in their beliefs that, even though they have a chance of surviving as Soviet prisoners, they choose to kill themselves instead. Many of the lives featured end in suicide.

The greatest attribute of "Downfall" is its honesty. Filmmaker Oliver Hirschbiegel, adapting from the book "Hitler's Bunker" by Joachim Fest and Melissa Muller (written with help from the real Traudl Junge), presents all of the facts straight. There is no romanticizing, no asking for sympathy or understanding for the Nazis. However, there seems to be an underlying plea that filmgoers know the other side of the story. So many World War II movies focus on just the Holocaust and the plight of the Jewish people, shown exclusively from the point of view of the Allies. While that is an integral part of the second World War, that is not the whole story. The hopes and fears of the regular German citizen also need to be known to truly get a grasp on such a dark time for the world.

"Downfall" (156 minutes) is rated R for strong violence, disturbing images and some nudity.