Psycho thriller gets caught in a tangled, aimless plot

If movie fans see the preview for "Bug," they'll expect to be freaked out…and of course, see some bugs. But "Bug," a product of the great William Friedkin ("The Exorcist" and "The French Connection"), fails to reward audiences in either regard.

"Bug" was terribly mis-marketed as a horror movie. The trailer is a selective compilation of all the segments of the movie that actually kept viewers awake, and was definitely not representative of the movie as a whole. Moviegoers who have seen the spine-tingling trailer and expect the conventional parasite-filled, insect-infested horror flick will be in for a sore disappointment.

Adapted from the Tracy Letts play of the same name, "Bug" is in fact in a genre all by itself, an unsuccessful amalgamation of psychological thriller, dark comedy, love story and horror movie. Almost all the action (or lack thereof) takes place within a squalid Oklahoma motel room. And despite the movie's title, we don't get a single glimpse of the bugs that are at the center of the story. 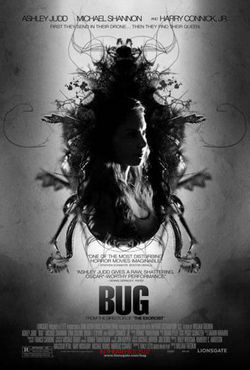 Photo: Despite the promising hype, "Bug" is devoid of all horror and creepy-crawlies. Photo courtesy of Wikipedia.com

Photo: Despite the promising hype, "Bug" is devoid of all horror and creepy-crawlies. Photo courtesy of Wikipedia.com

Ashley Judd plays Agnes White, a lonely waitress and drug addict living in the aforementioned room. An emotional wreck, she lives in the perpetual fear that her violent ex-husband Jerry Goss (Harry Connick Jr.) will get out of jail and come back into her life, a fear that eventually becomes true when Goss is indeed released. However, she is rescued by the seemingly shy and friendly war veteran Peter Evans (Michael Shannon), who becomes her lover and protector.

Events take a turn for the worse when Peter discovers bugs in their bed, and then reveals to Agnes his belief that military doctors experimented with placing insects in his body. His paranoid fear of harboring parasites insects and belief in outrageous government conspiracies eventually draw both him and Agnes into an irreversible chain of events.

Despite the apparently aimless plot, the acting is unparalleled. Ashley Judd plays the part of an emotionally torn and lonely woman with an abusive past flawlessly, while Michael Shannon accurately portrays a paranoid, AWOL Gulf War veteran on the run from military doctors who view him as their experiment and pet project.

Those in search of a good old-fashioned horror flick will not find it here. "Bug" is more of a psychological thriller than anything else, and certainly not for everybody. If anything, you will fear more of what the characters will do to each other and to themselves rather than what the bugs will to do them.

"Bug" (102 minutes, now playing at most area theaters) is rated R for some strong violence, sexuality, nudity, language and drug use.