A stage away from the stage

In the middle of an uncrowded classroom, a student is demonstrating swirling dance moves across the floor.

"One, two, cha cha cha! One, two, three, cha cha cha!" she exclaims, throwing her hands into the air. Then she turns to another student standing next to her, prompting him to follow suit. He does, hesitantly, stumbling through the steps with clumsy obedience. The dance instructor is getting more and more frustrated, until, suddenly, someone yells "Freeze!"

A different girl replaces the instructor, and suddenly it's the heart-wrenching scene of one student mourning the death of another. "Not after all we've been through!" she wails, as the "dying” student closes their eyes. From there, the scene changes again-- a panicked birth, a crazy guy trying to lure a child into their van, a guitar lesson. And that's just the warm up for this meeting of Blair's student-run Performing Arts Club.

The Performing Arts Club was founded by a mutual love of theatre and the extensive effort of seniors Isaac Jiffar, Alex Michell and junior Patty Pablo. Last year, after Blair's fall play "Taming of the Shrew and Tamer Tamed" ended, they missed the feeling of performing and working with their castmates. "A lot of us were very depressed, and we didn't have anything to do," recalls Pablo. It was originally President Jiffar's idea to start a club where they could do the same kinds of activities, and Vice Presidents Michell and Pablo were quick to agree. Thus, the Performing Arts Club was born.

The trio came to English teacher Keith Anderson for a club sponsor and a space to use. Anderson, who is also involved with the One Acts and the Thespian club, admits that he does very little with the club, now that it's up and running. "Isaac completely thought of this himself," Anderson says. "It exists because he wants it to exist." Anderson is a sponsor again this year along with Adam Clay, another English teacher. Although he can't always attend the meetings, he does "watch and enjoy what they do." 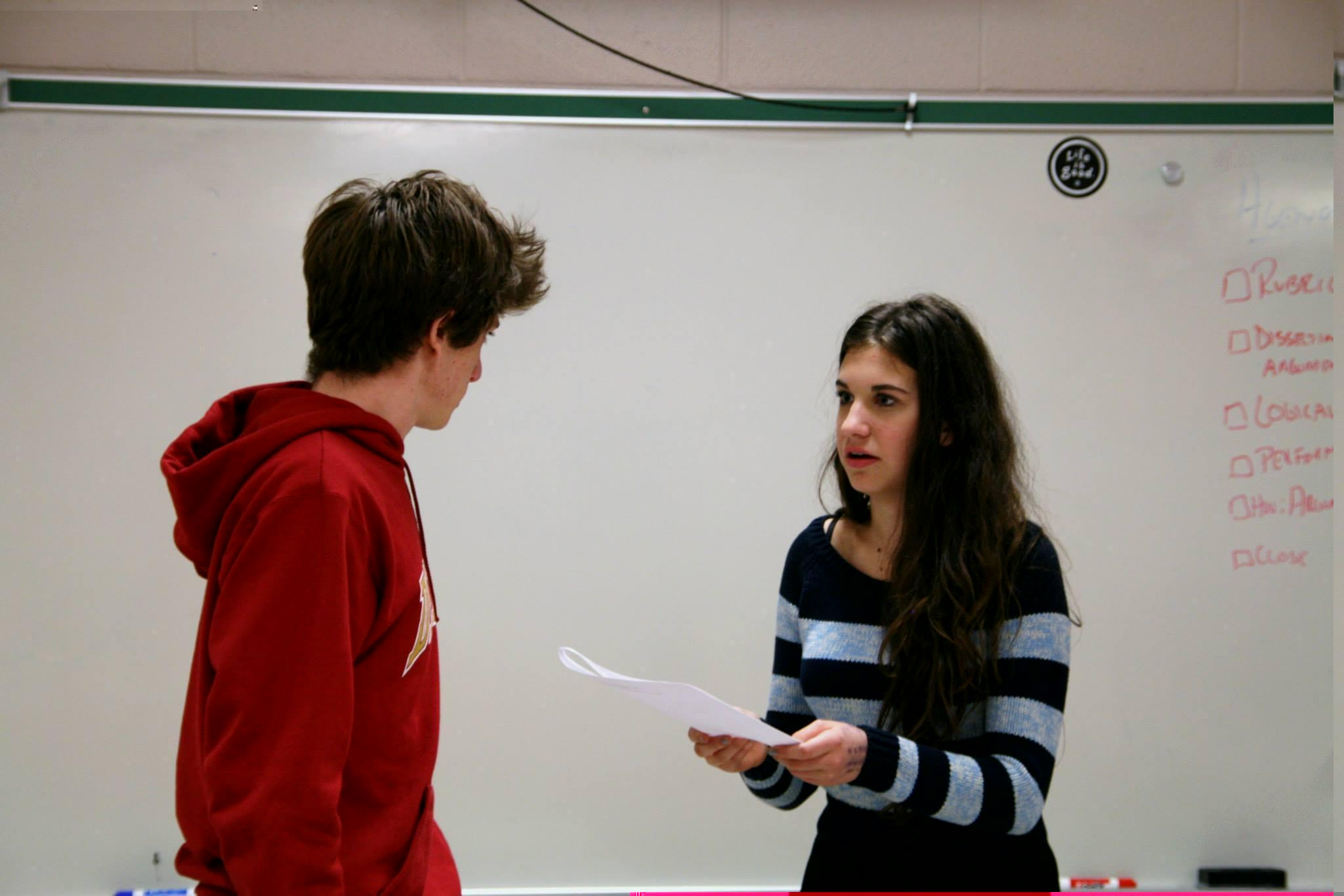 Photo: Senior Dana Cook and Sophomore Rachel Arbacher perform one of the scenes written by Pablo, Jiffar, and Michell for the upcoming competition.

Photo: Senior Dana Cook and Sophomore Rachel Arbacher perform one of the scenes written by Pablo, Jiffar, and Michell for the upcoming competition.

Performing Arts Club began officially in the second semester of last year, with the three using English teacher Keith Anderson's classroom. Jiffar, Michell and Pablo gained members for their club primarily through word of mouth, inviting their friends to come and hang out during lunch. The club is currently popular with members of the Blair theater community as well as a hangout for other thespians. Even so, membership is not where they'd like it to be. While the classrooms aren't empty, they aren't exactly crowded. The club is looking for a bigger and more diverse group. "We get a lot of theater kids," Pablo admits. "We've been doing pretty well membership-wise, but we'd like a lot more members, especially for 6th lunch."

Right now, the club is open for anyone who's interested on Wednesdays during 5th and 6th lunch. Meetings consist of well-known improv games, such as "Freeze" or the "Question game," but the bulk of the meetings are in preparation for the Montgomery County Public Schools (MCPS) Theatre Festival in January. Jiffar, Michell and Pablo wrote several scenes last year for the group to rehearse, and now they're putting finishing touches on them in order to compete. "We thought that it'd be a great opportunity for club members to experience something outside of Blair theater," Pablo says. "Also, we wanted to showcase the scenes we wrote, so that's a plus."

The club is still more about the process for them and having fun. "We just want to make people more comfortable to act in front of other people," Michell says.

The club has already attracted some new members this year, including freshman Dominic Massimino, who participates in theater outside of Blair. He came to a meeting and enjoyed it. "It seems like a good place for people to come," he says.

Performing Arts Club is an opportunity for Blazers to perform without being in a formal play, hang out with their theater-loving friends and generally have a great time.