The club hosted regionals event for Maryland on Jan. 11

“Usually you make $9,500 every week and now with this promotion, you were able to make an additional $834 a week. This gave you a profit of about $375 a week, so that was very good for your business,” junior Joseph Zenick says. At the moment, he is not an ordinary high school student. Instead, he is a financial analyst temporarily contracted to Clock House, a retail clock store. Zenick is providing a critical recommendation to the owner about the stores sales and whether they have the capacity to hire an additional employee. 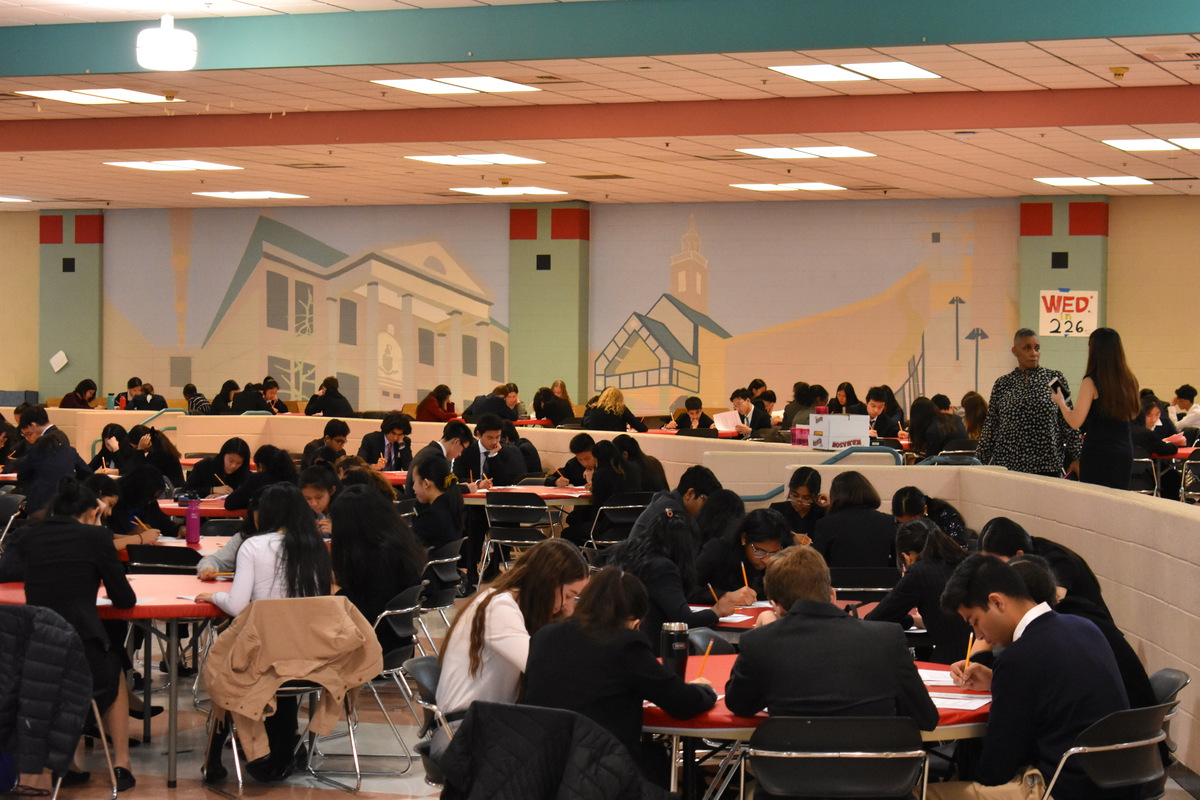 Zenick was competing in the Business Finance Series event at DECA regionals (encompassing teams from Howard, Anne Arundel, and Montgomery County) and placed third in the category. The mission of DECA, formerly known as the Distributive Education Clubs of America, is to “prepare emerging leaders and entrepreneurs for careers in marketing, finance, hospitality and management in high schools and colleges around the globe.” Junior DECA captain Shariar Vaez-Ghaemi describes the unique opportunity DECA provides. “It’s just a great opportunity to get your school more involved in leadership and entrepreneurship, things that don't normally get taught in the classroom,” he says.

Additionally, there are two components: a 30-minute written exam about common business principles, and an interactive role-play event with an industry professional serving as a judge. The role-play can be done in partners or individually and competitors are given 15 minutes to assume a role after being handed a prompt. They then give a ten-minute presentation and complete a question-and-answer session with the judges, who play the role of business owners. 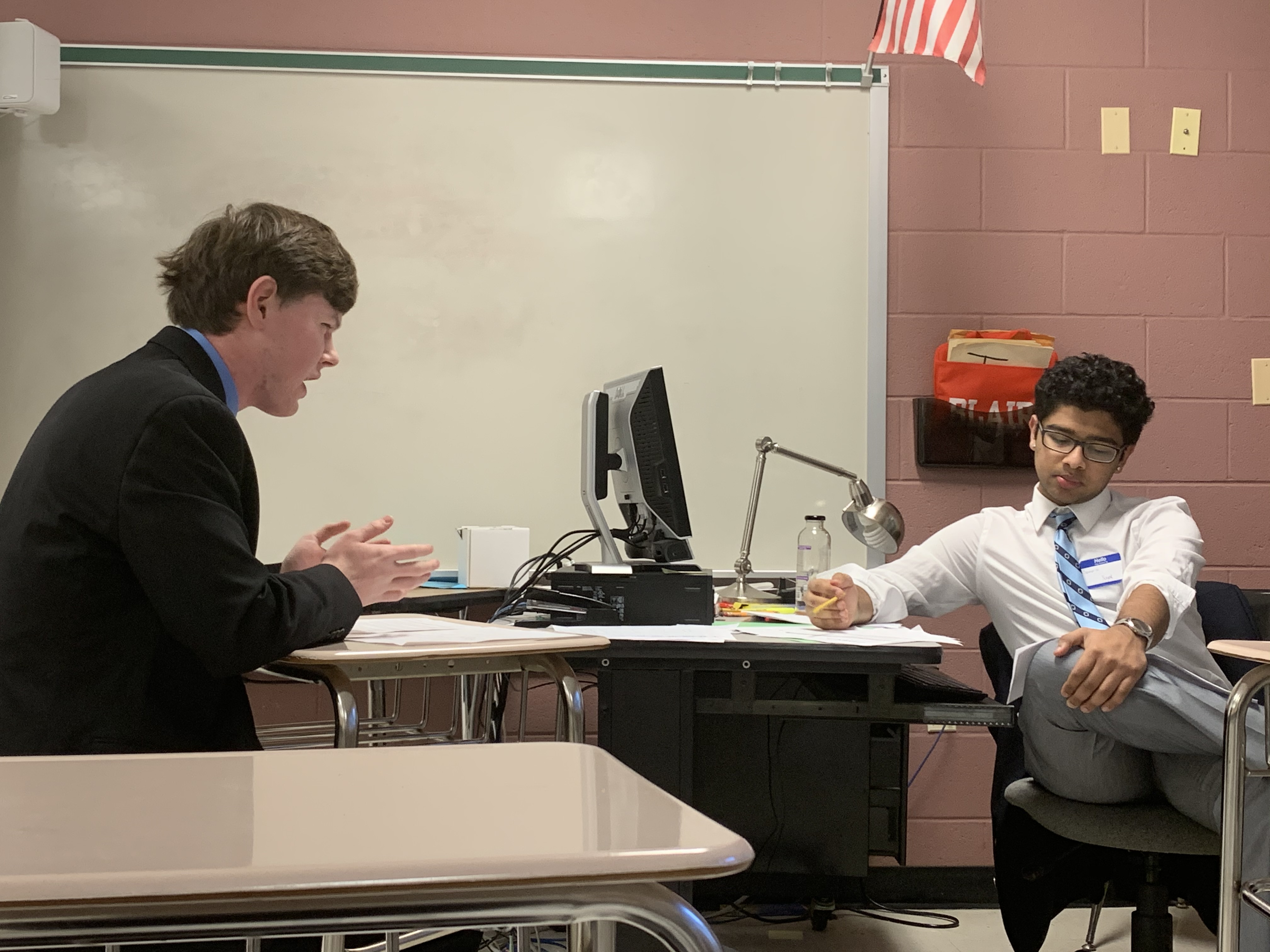 This year, Blair DECA hosted Maryland’s regional competition from 1 p.m. to 6 p.m. on Jan. 11. The opening ceremony invited teams from all over the county and was hosted in the student activity center (SAC). Following the welcome speech delivered by senior Alyssa Ma, participants took their 30-minute written marketing exams. Blair DECA also went above and beyond to make the day special by getting motivational speaker Jordan Davis to talk about his experiences with the program as well as by providing dinner for the participants and judges.

Vaez-Ghaemi describes the planning process, which started in November. “We had to contact some local businesses so we could have some more money, just because of the fact that it was only $15 per person. [On Friday], we were up here until 8 p.m., making sure we had all the papers ready, especially having spreadsheets ready for the judges,” Vaez-Ghaemi says. He recognizes that the experience was chaotic, but argues that it was absolutely worth it.

Blair DECA takes pride in hosting the regionals event as a second year team. Blair was given the opportunity to hold regionals because of an open position in Maryland leadership which Ma filled. Many schools got pushed into Future Business Leaders of America (FBLA), causing the student board to shuffle dramatically. There was no region one vice president, who usually has the responsibility of hosting regionals. Blair nominated Ma and she ran unopposed.

As a whole, DECA has 225000 members, 3775 high school chapters, 300 collegiate chapters, and 5500 advisors. Maryland has one of the smallest chapters; it is less successful than even the Delaware chapter. Some of the most well-known teams are from Richard Montgomery and Walt Whitman. Hosting regionals at Blair was a big step for Blair DECA and increased the team’s recognition.

Blair DECA advisor Donna Whitney praises Blair DECA leadership for their incredible business skills. “They understand business, they understand public speaking and they know the art of sale. They know how to get things from people. I think what I was very pleased with was how they were able to market out in the community and they got a lot of things, like food and drinks, donated to help us with DECA. It blew me away,” Whitney says. These skills will indubitably be put to use as the team competes at the state championships in February.

Editor's note: Alyssa Ma is one of the business executives for Silver Chips Print.