A suspension of sense

Last Wednesday, the school board of the Christina School District in Delaware made a decision to revoke the 45-day suspension of 6-year-old Zachary Christie. The first-grader's initial infraction? Bringing a Cub Scout utensil that combines a fork, spoon and knife to school for his lunch.

The Christina School District is one of the many districts throughout the nation that have a zero-tolerance policy on weapons, grounded from past tragic events such as the Columbine High School and Virginia Tech massacres. Based on the Christina School District's Student Code of Conduct, any possession of a weapon, regardless of the student's intent will immediately result in severe punishment. While a zero-tolerance policy on weapons is surely in the best interest of students and their parents, Christie's case clearly exemplifies its adverse effects on a child's well-being and the judgment of the school system. 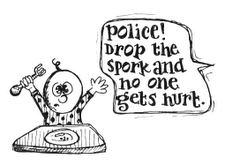 Photo:
The most prominent flaw in zero-tolerance policies is their lack of common sense - officials should be able to apply discretion on a case-by-case basis to avoid criminalizing the innocent. Technically, a sharpened pencil, ruler or book has a similar potential-threat level to that of a knife. If this distinction is made, equally reasonable judgment should be extended to the involved individuals.

But because discretion cannot be applied, minor infractions such as Christie's are always treated on a more serious level, which consequently causes more disruption to students' education. Unjust punishments of students based on overly-stringent rules causes mistrust of the school's authority amongst students and teachers, which ultimately will lead to a less safe environment.

Shockingly, it is not the first time the Christina School district has encountered controversy surrounding their weapon policies. Last year, Delaware lawmakers granted school boards to "on a case-by-case basis, modify the terms of the expulsion” after a third-grader was expelled for having a knife with which to cut her birthday cake. The case-by-case criterion, however, could not be applied in Christie's case because it does it applies to only expulsions, not suspensions.

In the aftermath of Christie, the Christina School Board did make amendments to its policies: for future possession of a weapon by a kindergartener or first grader, suspension is now limited to 3 – 5 days. How this will help future elementary students avoid undeserved punishment, however, is unclear. It is not unlikely a second, third, fourth or fifth grader will make a mistake equally innocent to that of a kindergartener or first grader, yet they will still suffer more severe punishment. In addition, the amendment still does not allow for the essential case-by-case evaluation of the student's intent.

Christie's bringing of his Boy Scout utensil to school was certainly against the school's policies, but more importantly, it was a mistake. Suspension for unintentionally violating a school's rule benefits no one. When the tainted face of school officials, outrage of parents and disrupted education of students are all added up, it is clear that zero-tolerance, reflective of its name, is worth nothing.