It was an event that most people didn't even know was was on television - filled with laughs, crying and montages. Yes, I am talking about the 63rd Emmy awards. After watching this year's production, this SCO entertainment expert and award show lover decided to take the time to break down all aspects of this year's awards, from the performers to the trophy winners. 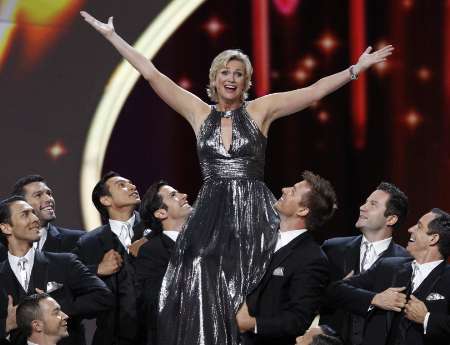 Photo: Jane Lynch as host of the Emmys in the opening musical number

Photo: Jane Lynch as host of the Emmys in the opening musical number

The show's highlights occurred mainly in the first half, such as the opening sequence which featured Jane Lynch singing her way through television shows and Jimmy Kimmel wrestling Jimmy Fallon. People expect a lot from the opening of the Emmys and host Jane Lynch brought it - especially when she surprised the characters of Mad Men by gracing their 1960s office with a modern-day, suit-wearing lesbian.

After "Modern Family" finished winning all of the awards, characters from numerous TV shows made an appearance on the set of "The Office" in a short montage. From Jesse of "Breaking Bad" dealing meth, to Creed, to Kim Kardashian admitting she doesn't really know what work is, to Tracy Morgan complaining about the elevators ("STAY PUT, TINY ROOMS!”), the scene had at least one good joke for every TV fan.

Then, Lonely Island got on stage and did a superb mash-up of "Jack Sparrow" with Michael Bolton, "The Golden Rule" with Maya Rudolph dressed as Lady Gaga and "I Just Had Sex" with Akon. The craziness of their performance could only be summarized by Jon Stewart's speech: "I have a lot of explaining to do to my kids. I really hope they're on Club Penguin right now."

Along with the opening and "The Office" bit, there were various other pre-taped segments to spice up the show, which was admittedly dull at times, including the hilarious Ricky Gervais and the entire cast of "Jersey Shore" bowing down to Jane Lynch, who was disguised as an Italian New Jersey reality show queen (there really are too many reality shows centered around New Jersey).

The Bad
Where to begin? Let's start with the failed humor of "The Emmytones," an singing group composed of Kate Flannery, Taraji P. Henson, Zachary Levi, Joel McHale, Colbie Smulders and Wilmer Valderrama (with LL Cool J inexplicably joining in). The arbitrarily selected ensemble sang the introduction to each section of the three hour long show. But, really, why were these completely unrelated actors grouped together to torture us? 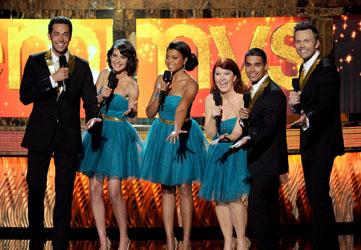 Photo: The "Emmytones" were an annoying addition to this year's show.

Photo: The "Emmytones" were an annoying addition to this year's show.

Another good question is why "Modern Family" won so many awards. Sure, it's an adequately funny show, but how did it consistently win over shows such as "Parks and Recreations" and "The Office"? Speaking of "The Office," Steve Carell finished off his role as Michael Scott after seven years. He received five Emmy nominations for the role, and yet he did not collect a single win for his solid work on the show. How did such a classic character get so blatantly overlooked?

However, the show's most grievous error was a mysterious electronic beeping noise that, like the bell in "The Polar Express," could only be heard by a small number of irritated viewers. I actually had to Google if others heard the sound to make sure I wasn't going insane.

The Odd
There were some parts of this TV award circus that seem to fall somewhere in between good and bad. Charlie Sheen was a presenter, but instead of the eccentric speech we all expected, he chose to extend a heartfelt - and slightly awkward – "thank you" towards the cast and crew of "Two and a Half Men." Later in the show, we then had to watch the strained interaction between Sheen's former co-star Jon Cryer and Sheen's replacement Ashton Kutcher.

Finally, "The Daily Show" won its ninth Emmy in a row for the same category. At this point, Jon Stewart seemed embarrassed by his excessive streak, and even said in his acceptance speech that "The Colbert Report" deserved the Emmy instead of his show.