A few jerseys that need to make a comeback

Although less popular than they once were, throwback jerseys remain a staple of popular culture. More than just a fashion statement, a retro jersey represents respect for an athlete and respect for greatness. The famed company Mitchell and Ness produced their first throwbacks by hand, but the jerseys were popularized by rap artists such as Outkast and Fabolous. But not all throwbacks are equal. Some catch the eye with their uniqueness or rarity. With this in mind, Silver Chips Online offers a few friendly suggestions for throwbacks to our friends at Mitchell and Ness. 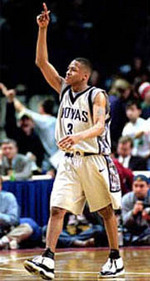 Photo:
Allen Iverson, Georgetown Hoyas
Ten years and four scoring titles ago, an All-American at Georgetown University left his mark in the nation's capital. The kid with the killer crossover was Allen Iverson. Under John Thompson, The Answer produced some highlight-reel moments while with the Hoyas. He was taken number one overall by the Philadephia 76ers and has been with them since. His legacy at Georgetown is one to remember, filled with ankle breaking moves and wins. His Hoyas jersey symbolizes his potential and what came before all the tattoos and NBA fame. Other than that, the Hoyas jerseys look smooth with their navy letters and silver trim.

Steve Francis, Blair High School
What better way is there to honor Blair's most famous athlete than to rock his high school uniform? Although he played at Blair for only a short time, Francis has remained connected to Blair simply through his success in The League. Every Blair basketball player knows about his time playing for the Blazers. Blair's past successes on the court are represented in Francis' high school jersey. The golden age of Blair basketball is contained in the jersey of Blair's most athletic alum. Imagine the street cred on Blair Blvd. when you walk down the hallway in a Francis Blazers jersey. 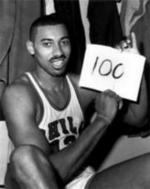 Photo:
Wilt Chamberlain, Philadelphia Warriors
On March 2, 1962, in Hershey, Pennsylvania, the Philadelphia Warriors beat the New York Knickerbockers by a score of 169-147. Wilt "the Stilt" Chamberlain scored 100 points in that game, claiming a record that has remained untouched to this day. Kobe Bryant came closest when he scored 81 points earlier this year, but that 19 points is a long way off. It's hard to believe that a jersey of such a famous player and one associated with such an unbelievable record has not been reproduced. It's time that the late Wilt Chamberlain gets his due in the form of a Philadelphia Warriors throwback.

Phillip Gainous, San Diego Chargers
Our principal played in the NFL. How cool is that? I need to see a Phillip Gainous throwback badly. Ever since I heard that he played for the Chargers, I have had new respect for The Man. Sure he makes us wear ID's, but he played in the NFL. The sky blue and yellow with the lightning bolts on the arms make me wish I could have seen the man we call Mr. Gainous lay someone out. Similar to the Francis throwback, this jersey would have special meaning within Blair's walls, not to mention it would get you in good favor with the principal.

Photo:
Michael Jordan, Birmingham Barons
This jersey could be an extremely hot sell. It's safe to say that MJ's decision to abandon sneaks for cleats was a mistake, but his time in the minors should be remembered in the remake of this jersey. Who can forget his baseball scene from "Space Jam?" Jordan's infamous retirement to another sport should be remembered and commemorated. The number 45 jersey could be a one of a kind commodity. In this case, "Air" Jordan refers to what his bat was making contact with, but the Barons are actually a minor league affiliate of the Chicago White Sox and would be a style statement, to say the least.