It may have been last year, one day after Thanksgiving, but I still remember it clearly - when all of the major news media outlets announced that Tiger Woods had been in a car accident. My dad, a golf aficionado, made sure to text everyone in my immediate golf-loving family with the news, and at that point no one knew the degree to which he was injured or what the circumstances. What we later learned was that our beloved Tiger was okay and only suffered from minor face lacerations. Too bad with the weeks to come, his reputation would be the one to suffer the most damage. 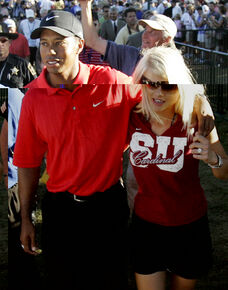 I have multiple memories of my family gathered 'round the television to watch Tiger win another championship. While I do admit that I find golf as entertaining to watch as I do watching my fingernails grow, there was something about Tiger. His charm on the green, his good looks and his unparalleled skill made him worth watching. On top of that, he just seemed like a nice guy who I would not mind getting to know off of the golf course.

That's why, when news broke that he had had extramarital relations with numerous women during his marriage, my heart broke a little. While it's true that his personal life should not be correlated with his talent, it's hard to separate the two when it comes to such a publicly known figure. At one point, he was the highest paid athlete thanks to endorsement deals with companies such as Nike, Gillette and Buick. These sponsors loved Tiger because he was talented and - what most sports fans thought - wholesome. Now, he has not been in a TV ad since Nov. 29.

The fact that Tiger's dirty laundry has to be aired so publicly is a mere side-effect of being such a powerhouse of publicity. While most celebrity-athletes cannot really maintain a squeaky-clean image (think Kobe Bryant), I honestly believe that Tiger's fans expected more from him. When his father died a few years ago, my entire family as well as the golf and sports community empathized with Tiger's loss. Fans loved Tiger throughout his wins, loses, disappointments and heartaches.

Fondness for Tiger has ebbed when news of his adultery surfaced, and especially now that he continues to avoid the public eye, giving his fans no explanation. Although it's easy to get caught up in his imperfections, at the end of the day we still have to remember that he is human. See, it was not until just now that I realized that I've been referring to him like I would a friend as Tiger, instead of using proper journalistic guidelines of calling him by his last name.

Because to me, and to so many of his fans, Tiger is more than just a guy on TV. He was able to bring an interest to golf that no other athlete before him had. He was inspiration for many young golfers. He brought together my family on select Sundays to watch him sink another Birdie and win another Green jacket.

This is not to say that Tiger can't gain back a lot of the admiration he once had, but he might just have to work for it. He's starting off on the right track by taking time off to try to work things out with his wife and after he does that, including addressing his fans and explaining himself, perhaps he can mend the rift. Until then, I'll stick to watching basketball.