A warmhearted wrestler poses his way to heroism

"Nacho Libre," the latest film from Jared and Jerusha Hess, will entertain moviegoers who are loyal to the infinitely quotable and hilariously self-deprecating humor present in "Napoleon Dynamite." The film stars Jack Black, in all of his exuberant glory.

With Black as the star, "Nacho Libre" is understably easy to prejudge. Black, a famous face in movie comedies, is a white actor in a film clearly set in Mexico. The duration of the movie could have just been scenes of Black wearing tight clothes, striking haywire poses, and singing in a Mexican accent all while getting jumped and beaten as often as he can in 100 minutes – anything to elicit a few laughs from a seemingly unpromising plot-line. Although all of these expectations are easily fulfilled by the time the credits start rolling, the film has a certain warmheartedness and intelligence that is undetectable unless seen in its entirety, which leaves viewers a little more satisfied than the usual knee-slapping, easily forgettable film.

Its aim is to expose the follies of self-aggrandizement and selfishness through a thick layer of toilet jokes, awkward humor, and physical comedy, all three doses of which may not appeal to every moviegoer. Black believably plays a half-Scandinavian character, which adds a bit to his quirkiness in the film. 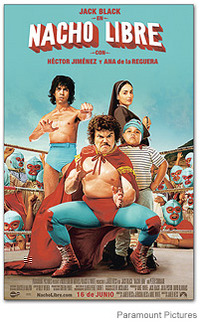 The film's plot is composed of the frustrated misadventures of a cook in a Catholic monastery named Ignacio (Black), Nacho for short, who dreams of becoming a "luchadore," a wrestler known for his trademarked mask and cape, and participating in the tag-team "Lucha Libre" wrestling tournament. Nacho recruits a local thief named Esqueleto (Héctor Jiménez) to be his wrestling partner, pursuing a double life as a part-time monk, part-time Lucha Libre wrestler, in an effort to fulfill his childhood dreams. After some misfortunes, Nacho decides to use what little he's acquired from his new career as "luchadore" to better the lives of the orphans living in the monastery and win the affections of the kindly Sister Encarnación (Ana de la Reguera).

The dialogue and style of "Nacho Libre" is certainly an offshoot of the successful comedy, "Napoleon Dynamite." Every line seems carefully deliberated and calculated, which gives the film a unique and effective comedic rhythm and timing. The Hesses demonstrated in "Napoleon Dynamite" their ability to elicit and implement physical comedy, but they also take several moon-leaps forward in "Nacho Libre." In order to imagine the character of Nacho's wrestling partner, Esqueleto, one only has to recall Napoleon's famed side-kick, Pedro Sanchez, and don him with longer hair and an attitude. The film's music is also used well, especially during the climax, and in a way that alludes to "Napoleon Dynamite" in a way.

Despite its funny moments, there are plenty of drawbacks. The plot-line is predictable at times and some of the more violent scenes seem overly-graphic for a film of its tone and rating. The film is meant to be over-the-top, but teeters on the bizarre at times, as Black is continuously abused and beaten up.
The movie does have a decent overall effect and deserves recommendation. If you have nothing to do and feel the need to pass the time with some friends, feel free to see this movie. It's not bad.

"Nacho Libre" (100 minutes) is rated PG for some rough action, and crude humor including dialogue.