A whole lot of holiday happening

If the holiday season has you desiring a whimsical winter wonderland, but the failing economy has you pinching pennies, fill up your calendar with free affairs that will fill a holiday attitude and leave you filled with holiday gratitude.

A Unique Attraction at Union Station
Right in the heart of Union Station is a large present from Norway - a 32-foot-tall evergreen Christmas tree meant as a token of goodwill to residents of the District of Columbia. The tree is intended to thank the U.S. for its assistance to the country after World War II and was given this past November. The daily attraction will remain on display until Dec. 27.
(50 Massachusetts Ave. Northeast, Washington, D.C.)

The Beauty at Brookside Gardens
Located in the center of Wheaton Regional Park, the "Garden of Lights" is a half-hour walkway display adorned with various winter scenes. The display boasts over 800 colorful lights. Admission is free and the display will last until Jan. 4 with the exception of Christmas Eve and Christmas Day.
(1800 Glenallan Ave., Wheaton) 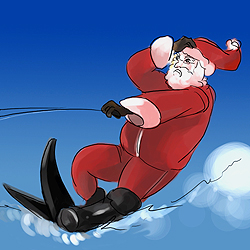 Photo:
An Exciting Exhibition: Windows to Wonderland
At the U.S. Botanic Gardens one can find a gallery of large, indoor and well-decorated holiday trees and an accompaniment of seasonal music and performances. In addition, there will be a viewing of the collection of National Mall Landmarks. The exhibit will run through Jan. 4.
(100 Maryland Avenue, Southwest, Washington D.C.)

Waterskiing Santa and His Knee-boarding Reindeers
The National Harbor will sport a skiing Santa Claus and his sleigh of reindeers on Christmas Eve from 1 - 1:30 p.m. Other characters to travel on the Potomac River include Frosty the Snowman and the Grinch.
(National Harbor Marina, Oxon Hill, Md.)

A Creative Creche Exhibit
The National Cathedral will showcase hundreds of nativity scenes from around the world until Jan. 6. This annual exhibit features nativity sets from cultures across the globe, all for free.
(Wisconsin and Massachusetts Ave., Northwest Washington D.C.)

At the National Gallery of Art, moviegoers can watch classics brought to life. The following films, produced by Sir David Lean in 1948, were restored from the British Film Institute National Archive. Admission is free and showings will be in the large auditorium in the East Building Concourse of the gallery.

The Magnificence of Madeline
This program is scheduled for Dec. 27 at 3 p.m. The film was made in 1949 and runs for 114 minutes. 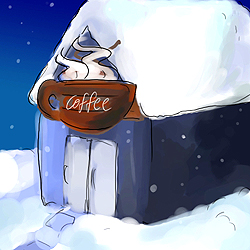 A Moody Open Mic at Modern Times Coffeehouse
In a small setting under the Politics and Prose Bookstore lies the Modern Times Coffeehouse, which holds an Open Mic Night every Friday. The event is free and anyone can sit and relax or sign up to perform their personal prose. It is best to arrive around 7 p.m.
(5015 Connecticut Ave. Northwest, Washington, D.C.)

A Sweet Evening at Santa's Workshop on the Ellipse
This brand new place is available for those who would like a photo with Santa and his helpers. The place provides musical entertainment and a hullaballoo of happy greetings. It all ends Dec. 24 and the shop does not have a full-operating time schedule so check the following web site for details.
(Constitution and 17th St., Washington, D.C.)

An Awarding Muse at The Smithsonian American Art Museum
The museum has created a detailed exhibition that centers around and celebrates Lincoln's Inaugural Ball. This is a great opportunity to become a Lincoln expert especially since the former president turns 200 years old next February. The exhibition runs until Jan. 18, 2010.
(8th & F Streets, Northwest, Washington, D.C.)

Happy Holidays from the National Museum of American History
The museum invites patrons to come and sing-along to classic American holiday songs. The gathering will continue on the following dates: Dec. 24 and Dec. 27 - 30.
(14th Street and Constitution Avenue) 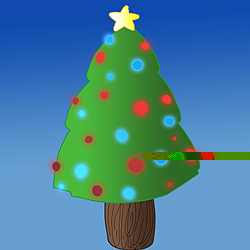 A Monumental Brass Quintet
This jazz band will provide a free Christmas Eve concert combining various types of sounds including Dixieland jazz, classic strings ensembles and many holiday favorites. The group will perform at the Millennium Stage located at the John F. Kennedy Center for the Performing Arts at noon on Christmas Eve.
(2700 F St. Northwest, Washington, D.C.)

Washington Symphonic Brass Holiday Celebration
The band will play varied arrangements of popular holiday jams including Hanukkah medleys and pieces by Bach. The event will be at Strathmore Music Center on Dec. 29 at 7:30 p.m. Tickets are free from patrons between the ages of seven and 17 with proper ID. Adult tickets range from $29 - 40.
(5301 Tuckerman Lane, North Bethesda, Md.)

Free Holiday Mug at City Place Mall
This is a long-term event from 10 a.m. - 4 p.m. (while supplies last) inside the mall and mugs will be given out. It will continue on Dec. 23 and Christmas Eve.
(8661 Colesville Road, Silver Spring) 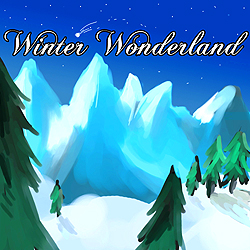 Photo:
Worth the money

After Christmas you may find your pockets padded with some extra dough that can go toward exciting events deserving of a couple dollars.

Sculpture Garden Ice Skating Rink
At the National Art Gallery, one can cruise in the chilly open air and view consummate sculptures all the while enjoying jingles from a state-of-the-art surround sound system. Weather permitting, the Sculpture Garden will be available until March 2009 with admission priced at $6 with a valid student ID and skating rental priced at $3 with valid ID.
(On the National Mall at 7th Street and Constitution Avenue NW)

Legally Blonde the Musical
This play adaptation of the hit movie starring Reese Witherspoon as Elle Woods has received over five Tony Award nominations and is a sensation to see as it debuts in the D.C. area. Ticket pricing begins at $25 and the show will run through Jan. 11 at the Kennedy Center.

Zinging Zoo Lights
This walk-thru show located at the National Zoological Park at the National Smithsonian Museum displays over 750,000 lights as well as live entertainment. Features including touring brilliantly lighted animal houses at night is definitely an atypical adventure. Admission is priced at $12 and the affair ends Dec. 30.