Goblet of Fire is the darkest, most thrilling of the series

We find 14-year-old Harry Potter (Daniel Radcliffe) entering his fourth year at Hogwarts, the school of witchcraft and wizardry, and this time, Headmaster Dumbledore (Michael Gambon) announces that the school will host the highly anticipated Triwizard Tournament. The competition, which used to take place every five years, was previously put on hold because of the disturbingly high mortality of the student contestants. This year, however, the tradition is resumed, and we are introduced to Durmstrang and Beauxbatons, two foreign magical schools who will join Hogwarts in the three-way competition among the schools. 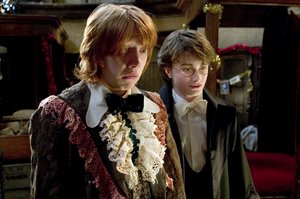 Photo: Ron (Rupert Grint) stares at his dress robes in disgust, appalled at what he must arrive in for the Hogwarts ball.

Photo: Ron (Rupert Grint) stares at his dress robes in disgust, appalled at what he must arrive in for the Hogwarts ball.

Students cheer when the names of Durmstrang's own Quidditch superstar, Viktor Krum (Stanislav Ianevski), Beauxbatons's mesmerizing Fleur Delacour (Clémence Poésy) and Hogwart's handsome Cedric Diggory (Robert Pattinson) erupt from the bewitched goblet of fire, the decider of the contenders for the tournament. But a stunned silence sets in when a fourth piece of paper flies out of the goblet's blue flames: Harry Potter.

Braving three life-threatening competitions involuntarily is not the only thing on Harry's mind. His visions of Lord Voldemort (Ralph Fiennes), who has been after Harry's life ever since he failed to destroy Harry as an infant, are becoming more vivid and sadistic, making the jagged scar on his forehead ache regularly. He must contemplate the puzzling skull-and-bones image that appeared at the Quidditch World Cup during his summer holiday. And that's not to mention asking Cho Chang (Katie Leung) to the Hogwarts international ball, or persuading his best friend, Ron (Rupert Grint) that someone else put his name in the goblet.

Thrilling visual effects in the Triwizard Tournament compensate for the altered and omitted subplots of "Goblet of Fire." Harry is first faced with a dragon —a Hungarian Horntail, to be exact — in a most spectacular flying scene. Later, he is confronted by the ominous Great Lake and its equally threatening inhabitants in a gripping underwater adventure, only to be warned of the complex labyrinth that lies ahead for his final test.

Returning actors play their parts exceptionally in "Goblet of Fire." Radcliffe, Grint (Ron) and Emma Watson (Hermione), all outshine their less authentic performances from the first three films. Maggie Smith contributes an outstanding interpretation of Minerva McGonagall, the Hogwarts professor whose hair is wound almost as tightly as her disposition. Alan Rickman gives a particularly unctuous spin on the greasy Severus Snape, while Fiennes gives audiences a case of the heeby-geebies as the merciless Lord Voldemort.

Newcomers to the story do equally well; Brendan Gleeson makes for a compelling Alastor "Mad Eye" Moody with a brilliantly disfigured face which, in comparison, makes the unmasked Darth Vader look handsome. Gleeson plays the paranoid and slightly suspicious Defense Against the Dark Arts teacher beautifully (well, in a manner of speaking). Miranda Richardson is a riot as Rita Skeeter, the obnoxious Daily Prophet reporter who is better fit working on tabloids than for Wizard Magazine. Ianevski plays up the physically awkward but otherwise charming Bulgarian contestant.

If theaters were allowed to host all-night movie sleep-overs, "Harry Potter and the Goblet of Fire" could easily do it. But for the sake of viewing time, director Mike Newell leaves Potter fans with the essentials of the 4th book: fear, death, suspense and even a handful of laughs. And he does it better than ever before.

"Harry Potter and the Goblet of Fire" (160 minutes, at area theaters) is rated PG-13 for sequences of fantasy violence and frightening images.