A Wii bit of exercise

Junior Taylor Smith has never been this good at tennis. She swings her arm casually, watching the tennis ball in front of her spring off the court and fly straight to the edge of her opponent's court. It's a clean hit - Smith is up a point. She laughs at her surprising success. "In real life, I can't play tennis at all," she says. But when it comes to Wii tennis, Smith could go pro.

Smith is just one of numerous teens across the globe who gather in living rooms with friends and family to play the increasingly popular Wii Sports and Wii Fit games. A national survey by the Pew Internet & American Life Project reported 97 percent of teens play some form of video game, with almost two-thirds using video games to socialize with family and friends. Ever more popular among these games have been the new Wii Sports and Wii Fit, selling 13.58 million units worldwide in just seven months last year. Wii Sports Resort ranked highest among all Nintendo games for overall sales, with many Blazers finding Wii Sports most enjoyable among video games. But for all of their benefits, Wii Sports and Wii Fit can't even touch real exercise.

All I do is win

Photo: The Wii Fit and Wii Sports games don't even require players to leave their house.

Photo: The Wii Fit and Wii Sports games don't even require players to leave their house.

Dr. Sandra Reichstetter, expert health author for StudyHealth.com, reports that the appeal of Wii Sports lies partially in its athletic simplicity. "It is easy to cheat by only playing the games that come easy to the specific player, instead of striving to improve performance by practicing the harder games," she writes on the web site.

Senior Lauren Gilkey, who plays Wii Sports on a regular basis, agrees that the game doesn't offer an athletic challenge. "You don't get exhausted," she says. "The game is designed in a way where people only exert so much energy playing."

Smith, an all-around competitive gymnast, acknowledges that as the primary difference between playing Wii Sports and actual sports. "It's so much easier," she says of Wii. To be fair, Gilkey recognizes that the game makes a fair attempt to mimic the physical abilities needed for actual sports. "They use the same body movements and motions that would be used in the actual sports," she says. "The creators made it as similar as they could."

Smith enjoys this easier level of play, especially in games like bowling. "You rarely get gutter balls," she admits. "But in reality, I always get gutter balls…the fun is winning!" Gilkey adds that the low level of difficulty can be beneficial by facilitating higher, ego-boosting scores. "After playing so many times, one accumulates points, which is something to brag about when playing with friends or family," she says. "It's a lot of fun. We're very competitive."

Reichstetter attests to the scores and spirited competition as two advantages of Wii Sports. "The high score lists can create additional incentives as they encourage the attempt to outperform previous results," she reports. "They can also add an element of competition to the family play that will work especially well for older children and teenagers… [to] make exercising a game rather than a chore."

However Smith and Gilkey do not need this extra incentive. Although Wii Sports offers low-key active fun, they turn to Wii Fit for the better workout. 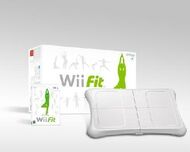 Photo: The Wii Fit video game, increasingly popular among teens as a way to stay physically active, centers on a balance board that monitors body movement.

Photo: The Wii Fit video game, increasingly popular among teens as a way to stay physically active, centers on a balance board that monitors body movement.

Reichstetter reports Wii Fit provides an impressive variety of exercises, all with the elements of an effective exercise regime. "It is possible to name a certain fitness goal [or] a certain amount of weight loss over a certain time period. Wii Fit is also able to display fitness tips," she adds.

While Smith and Gilkey don't follow a strict workout schedule, they do use the game to burn calories. "You'd be surprised. Wii Fit is actually a great workout," Smith says. As an example, Smith explains that the bike ride game requires players to "pedal" by alternately lifting their legs high to the point of exhaustion. "That's one of the realistic games," she says.

Gilkey claims that, more than just a bout of amusement, the video game offers legitimate fitness value, if accompanied by dedication and effort. "If you use it consistently, I believe it will help people achieve whatever goals they have," she says. "I try to do it every night," she adds. Her goal is more general: to burn calories. Smith has a similar goal, although getting in shape is less important to her because she already does gymnastics and Poms during the year. "I am already fit," she laughs. "So I think that's why I don't play it as often."

But both Smith and Gilkey believe that in comparison to actual sports, the Wii games leave something to be desired. "I like playing real sports because it's more fun and more of a workout," Smith says; she hasn't played a Wii Sport that can compare to the intensity of her regular gymnastics practices. The step aerobics game on Wii Fit is the most similar to dance, she admits, but it is not enough for sufficient exercise.

As a cheerleader, Gilkey finds the Wii games lacking compared to practice opportunities both physically and socially, as she enjoys the rewarding team environment in cheerleading. "I really enjoy the competitiveness of actual sports, which is something I don't really get in Wii Sports," she says.

Dr. Gareth Stratton, a Children's Health expert who performed a study on Wii Sports at the Research Institute for Sport and Exercise in Liverpool, England, believes there is something else teens do not really get through Wii: an actual workout. "The energy used when playing active Wii Sports games was not of high enough intensity to contribute towards the recommended daily amount of exercise in children," he reports in the study. Although his study found that youth would only burn two percent more calories per week by trading stationary video games for Wii Sports, Stratton still insists, "they would burn far more calories playing the real sports."

Smith agrees with Stratton's insistence upon real physical exercise. "It is the lazy way to do things," she says of Wii. "Just pull out the board, turn the television on…what you could be doing in real life [you're doing] in your living room instead."

Yet regardless of their minimal fitness value, Wii Sports and Wii Fit still offer the classic fun of spending time with family and friends. "Wii Fit is definitely a social experience," Smith says. "It's other people's encouragement that makes me want to play."