A wonder world of Warhol

The Corcoran's latest installment idolizes the "Legacy" of Andy Warhol

Four inches of rain didn't stop DC art-goers from finding their way through the heavy downpour to the "Warhol Legacy" exhibit at the Corcoran Gallery of Art on Saturday. And why should the weather stop them? Walking through the wet streets of DC beats traveling all the way to Pittsburgh in order to see so much Warhol in one building. 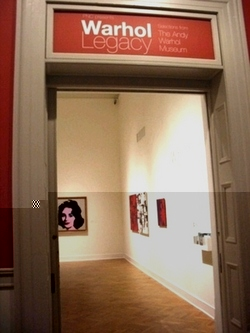 Photo: The Warhol exhibit entrance is located on the first floor of the Corcoran Gallery.

Photo: The Warhol exhibit entrance is located on the first floor of the Corcoran Gallery.

The "Warhol Legacy," the newest exhibit at the Corcoran, is a collaboration between the Corcoran and the Andy Warhol Museum of Pittsburgh. The exhibit gives art lovers a rare opportunity to view many of Warhol's most famous works, displaying over 150 paintings, photos, drawings and abstractions. As with all of Warhol's pieces, the works on display were inspired by the subjects and themes that consumed Warhol throughout his life, including self-portraits, movie stars, pop culture, death and disaster, Mao and early hand-painted ads. According to the curators, "'Warhol Legacy' is organized thematically to reflect the range of the artist's production over the span of his career while mining the strengths of the Warhol Museum's diverse collection."

The exhibition is divided into six theme rooms. The premiere room features Warhol's iconic silk screen portraits, which he began producing in 1960 and are considered his signature works. The famous faces bathed in bold colors staring back at you include Michael Jackson, Alfred Hitchcock, Clint Eastwood, Dolly Parton, Judy Garland, Meryl Streep and the trademark portraits of Marilyn Monroe and Jackie Kennedy. The bright color and memorable celebrity faces illuminate the white-walled room and immediately satisfy any Warhol fan's desire to see his most recognized pieces. While some of the portraits are less publicized works, the room also encompasses the memorable Jackie-O images and five differently-colored versions of his iconic Marilyn Monroe prints in a row, each as distinct and gorgeous as the next. 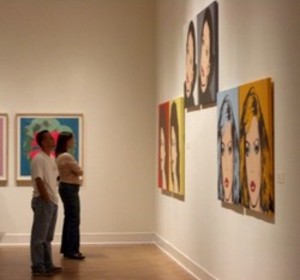 Photo: One of the rare benefits the exhibit offers is having more than one copy of Warhol's famous portraits for each celebrity. This allows the viewer to fully appreciate his depth of color and variation of design by being able to compare the two next to each other.

Photo: One of the rare benefits the exhibit offers is having more than one copy of Warhol's famous portraits for each celebrity. This allows the viewer to fully appreciate his depth of color and variation of design by being able to compare the two next to each other.

The room is remarkable for the sheer number of iconic works it displays. While other museums might be limited to only one or two portraits, the museum collaboration behind "Warhol Legacy" gives viewers the rare experience of viewing corresponding pairs of portraits which demonstrate Warhol's singular ability to produce a broad variety of distinct images in one medium.

After this initial room of bright eye-candy-color, the exhibit takes an abrupt turn in the next room by focusing on the darker side of Warhol's works. The room, entitled "Death and Disaster," is a small collection of morbid prints and silk screens covering dark grey walls. These gloomy images show that Warhol was just as fascinated by destruction and the breakdown of capitalist society as he was with the carefree lifestyle of celebrities. The juxtaposition of the two rooms makes for an interesting experience. The most memorable images depict a suicide, the victims of a car crash, an electric chair and portraits of Jackie Kennnedy mourning her husband.

Following the gloomy display is a brightly colored room devoted to China's long-venerated and now vilified Chairman Mao Tse-Tung. The room itself is a piece of art, covered with bright white and purple Mao wallpaper. Hanging on the one-of-a-kind wallpaper are humorous depictions of Mao from the same portrait that appeared in Mao's famous "Little Red Book." The official photo of China's revolutionary leader has long been displayed on the walls of homes, businesses and streets throughout China, making it, in Warhol's eye, akin to the mass-marketing advertising campaigns for Coca-Cola or Campbell's soup. In a single room, Warhol reduces the power of a dictator to that of a Campbell soup can. Ironically, there is no red whatsoever in any of the colorful portraits. 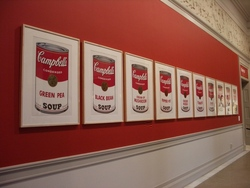 Photo: A series of Warhol's trademark Campbell Soup cans entertained diners in the Corcoran's cafe, adjacent to the exhibit entrance.

Photo: A series of Warhol's trademark Campbell Soup cans entertained diners in the Corcoran's cafe, adjacent to the exhibit entrance.

The last three rooms display works that are far less well-known than the first three, but just as impressive to any true Warhol fan. Some of the abstractions are so simple they look as if they belong in a coffee shop. If these abstractions didn't hold a famous signature along the bottom, most would probably have never appeared in any museum.

Fans who love and idolize Warhol or are familiar with his work will enjoy and value the entire exhibit. But those who only appreciate mainstream Warhol might as well take a turn after the spacious main room and explore the Corcoran's permanent collection, because the rest of the exhibit requires a more adventurous artistic eye. Despite what type of art-lover you are, it would be a mistake to miss this exhibit as you would be missing a rare opportunity to experience a huge collection of Warhol's most acclaimed work, in one place and here in our own city.

"Warhol Legacy: Selections from The Andy Warhol Museum" will be on exhibition from September 24, 2005 through February 20, 2006. The Corcoran is located at: 500 17th Street NW, DC. The fee for students is $4. For more admission details and hours, visit the web site.