A world of difference

Leaving behind his many contributions, ESOL teacher Joseph Bellino says goodbye to Blair

After a long school day, a voice over the intercom announced a long-distance phone call for Joseph Bellino, a bewildered new English for Speakers of Other Languages (ESOL) teacher. The caller was a teacher in Arizona, who had subscribed to Silver International, Blair's international newspaper that Bellino created. She needed to share with Bellino an "amazing thing that had just happened."

The teacher described a student who she referred to as a "do nothing" because he was rarely motivated in class. "However, she had noticed that he was starting to do his work after a poem he had written was published in Silver International," Bellino recalls. "That morning she saw him with a pen in his hand surrounded by a group of girls. She asked him what he was doing and he answered, 'I'm giving them my autograph. I'm a writer now!' "

The student would not have had the chance to become a writer if not for Bellino. On Jan. 31, 1974, Bellino began his first day of work as an ESOL teacher at Blair, fresh from graduate school with three years of teaching experience in the Peace Corps in West Africa. Bellino arrived just seven years after the creation of the ESOL program in Montgomery County Public Schools (MCPS), which was implemented to meet the needs of the growing population of foreign students needing to learn English as a second language. 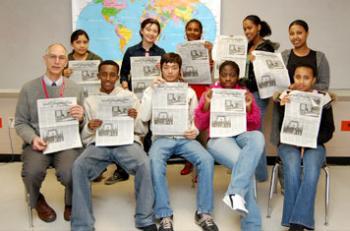 Thirty-four years later and currently the ESOL resource teacher, Bellino is moving on to the next phase of his life as an achievement specialist working with databases at Watkins Mill High School. Besides his trademark innovations in education, the memories and efforts Bellino leaves behind at Blair are imprinted in the minds and achievements of his students. "He's some big shoes to fill," says fellow ESOL teacher Charles Wang.

To students, Bellino may be best known for his work with the ESOL department - but to teachers, he is known for his pioneering school databases. When he started teaching, ESOL teachers were required to send report cards home to students in their family's native languages.

As the number of students in the ESOL program rose, it became harder for the teachers to individually hand-write each report card in the different languages. At the same time they saw the value in involving the entire family by reaching out in their own language. "I would take the report cards home, type in the grades, then bring the data back," Bellino explains. "Although it was very time-consuming, I found my students were very motivated if their parents were involved...I thought there must be an easier way to get computers to do it."

Bellino developed computer databases that grew to include records such as courses, grades and test scores for the whole school - something unheard of throughout MCPS at the time. "I don't think people realize how easy we have it here," Wang says. "There's a running joke here that the system, called FileMaker Pro, should be called FileMaker Joe."

But Bellino's real motivation for Silver International was the need to cultivate student interest in writing in English. In 1984, Maryland implemented a writing test that students needed to pass in order to graduate. After Bellino's students passed the test, he found, they dropped interest in English composition. "I started it because students stopped writing. I wanted students to know that we don't write simply to pass a test," Bellino says. "I thought that having a newspaper would be a good way to help people."

In 1986, Bellino gathered a group of students after school and created Silver International. After three years, it became a regular installment of Blair's print newspaper, Silver Chips. "The editors of Silver Chips told me that this is too good to keep in a small group and everybody needs to see this," Bellino says. 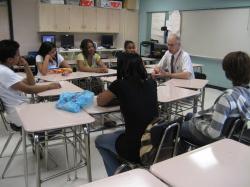 Photo: Even after the students have finished writing for Silver International, Bellino continues to teach and work with them in class.

Photo: Even after the students have finished writing for Silver International, Bellino continues to teach and work with them in class.

Over the years, Silver International has grown from just an extracurricular activity to an ESOL Journalism class, which Bellino teaches. And students have come away with more than just better English-speaking skills.

According to Bellino, seeing their work printed in a newspaper also helps give these students a sense of purpose when they otherwise might feel alienated at Blair. "It's just the whole idea of the pride that you feel when you see something that you've written published," Bellino says.

ESOL teacher Lisa Beltethon agrees on the school-wide influence of the newspaper. "I think Silver International has given kids that are overseen in the size of the school an opportunity to be heard," she says. "It makes them feel included."

The newspaper's deep influence continues beyond high school. Jose Beltran, an immigrant from El Salvador who graduated in 1993 now owns the local restaurant Fajita Coast, still remembers when Bellino asked him to write an article. "He made me talk about what I came through and I didn't want to," Beltran says, "but it made me feel good, made me feel like I could do something to express myself."

Former Blazer Luis Catacora, who graduated in 1989, also reminisces about his experience with Silver International. "It helped us in a number of ways because first of all, it introduced us to the concept of team work and coordination, and deadlines also," Catacora says. "It also gave us a lot of pride on our work…it gave each student a voice to tell their side of the story."

Silver International does not help only those who write, but also those who read the paper. "To see some other people writing about their experiences in the newspaper is very liberating to other students because they see they're not the only ones who have experienced these terrible things," Bellino explains.

Past memories and future hopes

Apart from creating databases and newspapers, Bellino was first and foremost a teacher. "Mr. Bellino was one of those people that doesn't give up, and even if you don't know how to read and write, he will sit down and work with you," Beltran remembers. "I was about to drop out of school but he said to me, 'your life is over if you don't continue and you will go nowhere.' "

To his colleagues, Bellino was also a role model and source of knowledge and help. "He puts a lot of effort and personal time in what he does and if anyone has any questions, he's more than willing to help out," Beltethon says. "He knows how each individual kid feels and what they need. He's very devoted, and he loves what he does."

Now, Bellino is moving on as he prepares for his new job. Instead of continuing his work as a teacher, Bellino plans to help with Watkins Mill's database system. "The principal at Watkins Mill was an English teacher here at Blair, so he knew about what I was doing with Blair's databases," Bellino explains. "He wanted something like that at Watkins Mill, so he created the position for an achievement specialist, whose job is to basically create databases."

As Bellino gets ready to leave Blair, he voices his hopes for Silver International. "I think publication is really important and students gain confidence and pride, and they learn," Bellino says, though the paper's future is uncertain as of now. "My hope is that if people value this part of teaching and learning, they would continue this type of writing and process."

As the school year dwindles to an end and people are saying goodbye to Bellino, Beltran sums up Bellino's legacy. "Blair is going to miss him," Beltran says regretfully. "He'll always be my hero."

Read Bellino's own account of his experience with Silver International here.