A world of women

Blazers look to women's colleges for a better education

Two college campuses. Both host impromptu Frisbee games on plush, green courtyards. Both maintain active dorm life past 2 a.m. Both have hundreds of enthusiastic fans attending sports events. But in the stands of one campus, the population is different - women dominate the bleachers, and not just because of the normal female majority present on most college campuses.

This campus is one of 60 women's colleges in the nation. Although women's colleges often bear the weight of stereotypes, they are an increasingly viable option for Blazers and other students across the country seeking outstanding college educations. 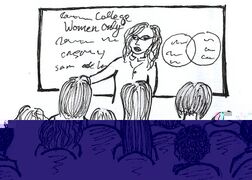 Photo:
What sets women's schools apart is their specific emphasis on women's success both inside and outside of the classroom, says Susan Lennon, president of the Women's College Coalition (WCC). Based in Connecticut, WCC is an association of women's colleges and universities established in 1972 to advocate for higher education in females. "It is women-centered in terms of the teaching style, the learning style, how women are represented in the disciplines," Lennon says.

Choosing single-sex
While visiting several other Massachusetts colleges, senior Sibyl Brown decided to tour Smith College, a women's school in Northampton, as a spur-of-the-moment decision. "At first I was actually really against the idea," Brown says. "I wasn't looking for an all women's school; it just happened." After a day on campus, Brown's attitude completely shifted. "Everything changed," she remembers. "It's not really that I wanted to go to an all women's school, but Smith has everything I am looking for in a school and more."

Similar to Brown, senior Maddy Ruvolo never intended to apply to a women's college. Ruvolo stumbled upon Scripps College, a women's institution in Claremont, California, as an afterthought. "I only visited Scripps because it is right next door to Pitzer, which is the school I thought would be my first choice," she says. A successful campus visit and some at-home research was all it took for Ruvolo to decide to apply early action. "It was just gorgeous….It seemed pretty perfect," she says.

It is not unusual for students to settle on a women's college without having a specific interest in the women's college experience, according to Lennon. She explains that students who choose women's colleges conduct their searches with the same interests in mind as those looking at coeducational institutions. Like other schools, women's colleges must provide an enticing atmosphere, rigorous academics and great opportunities. "It really has to do with what the student is looking for," Lennon says. "It's all about finding the right fit."

Boys, boys…boys?
For many, settling on the right school entails discovering a rampant social scene. Consequently, female students aware of the implications of a women's college may run or hide at any mention of a single-sex educational institution. However, according to Lennon, the all-women label often causes prospective students to misjudge the schools. "The first big thing people always think of is: there aren't any boys," Lennon says. "That's not true because women's colleges are members of consortiums. There's a lot of cross-registration."

College consortiums are associations of schools in close proximity that allow enrolled students to take courses and participate in activities at any of the colleges in that consortium. This arrangement allows students at women's colleges to enter the social scene at coeducational institutions, just as men from neighboring colleges are invited to cross-register, or take classes at women's colleges.

Photo: Senior Maddy Ruvolo was drawn to Scripps College because of its beautiful campus, great academics and supportive atmosphere.

Photo: Senior Maddy Ruvolo was drawn to Scripps College because of its beautiful campus, great academics and supportive atmosphere.

Ruvolo recognizes that the consortium aspect of Scripps makes it less of a women-dominated community. "All the social stuff is coed so it's partly an experience of a women's college and part not. You're not isolated and there are boys," she says.

Brown notes that men will also inevitably be a part of the off-campus community, which is still easily accessible to all students. "After your day of classes without men, you can dress up and go out to the town or schools nearby…and be around men," she observes. "So it's not that you're never around men; you just get to pick and choose when you want to be."

A higher standard
Part of what may draw students to women's colleges is the higher caliber of active learning that occurs there. According to the WCC web site, studies have shown that students at women's colleges are more engaged in class discussions, more collaborative with peers and more involved in the community than their counterparts at coeducational institutions. These female undergraduates also interact with faculty to a greater extent than those at other schools, which as the WCC suggests, reveals that professors at women's colleges are more accessible and caring.

Lennon finds that these advantages stem from the colleges' strong focus on success of students. "It takes the education of its students very seriously, and that's not to say that other schools don't. The environment is different…it's a very intentional and deliberate environment," Lennon says.

One aspect of this environment is greater opportunities for women to become leaders without having to compete with men. "If you look at leadership positions women have them all," Lennon says. "It's about every opportunity." With no male presence on campus, women are free to reach their full potential and encouraged to continue to do so after college. "[There's no] holding back on your thoughts because men are there," Brown points out. "All of the focus is on helping women succeed…in a world still mainly dominated by men."

No regrets
Ruvolo, who has been accepted to Scripps and plans on attending this fall, expects to thrive in the supportive campus atmosphere. "I'm looking forward to being in that environment and being around a lot of really strong women," she says.

Smith's sense of community is something Brown also anxiously anticipates next year. "The sisterhood and the unspoken understanding and support among all of the women is a feeling that no one can describe," she says. "When I went to Smith I got the feeling that I could do what I wanted or be who I wanted…and nobody would judge me."

The opportunities for success don't stop after graduation. In addition to providing an encouraging academic and social environment, women's colleges have an impressive record for placing their students in graduate schools, according to Lennon. The experience of a women's college leaves students with a lasting sense of empowerment and identity that Brown is eager to know. "I think attending an all women's school gives women more confidence and allows them to understand fully who they want to be," she says. "There are no boundaries and no limits."