Above the sky and under the radar

Adrian, a senior, stands at his desk in his English class. For what seems to him like an eternity, he stares blankly at the passage he is supposed to be reading aloud. "Focus," he tells himself. "No silly mistakes." He takes a deep breath and stumbles his way through the reading before dropping into his seat, where he can hide his face from the teacher.

For most Blazers, reading a few words aloud is an easy task. But on this morning, it's not easy for Adrian. Stoned, smacked, baked, blazed - he's high. 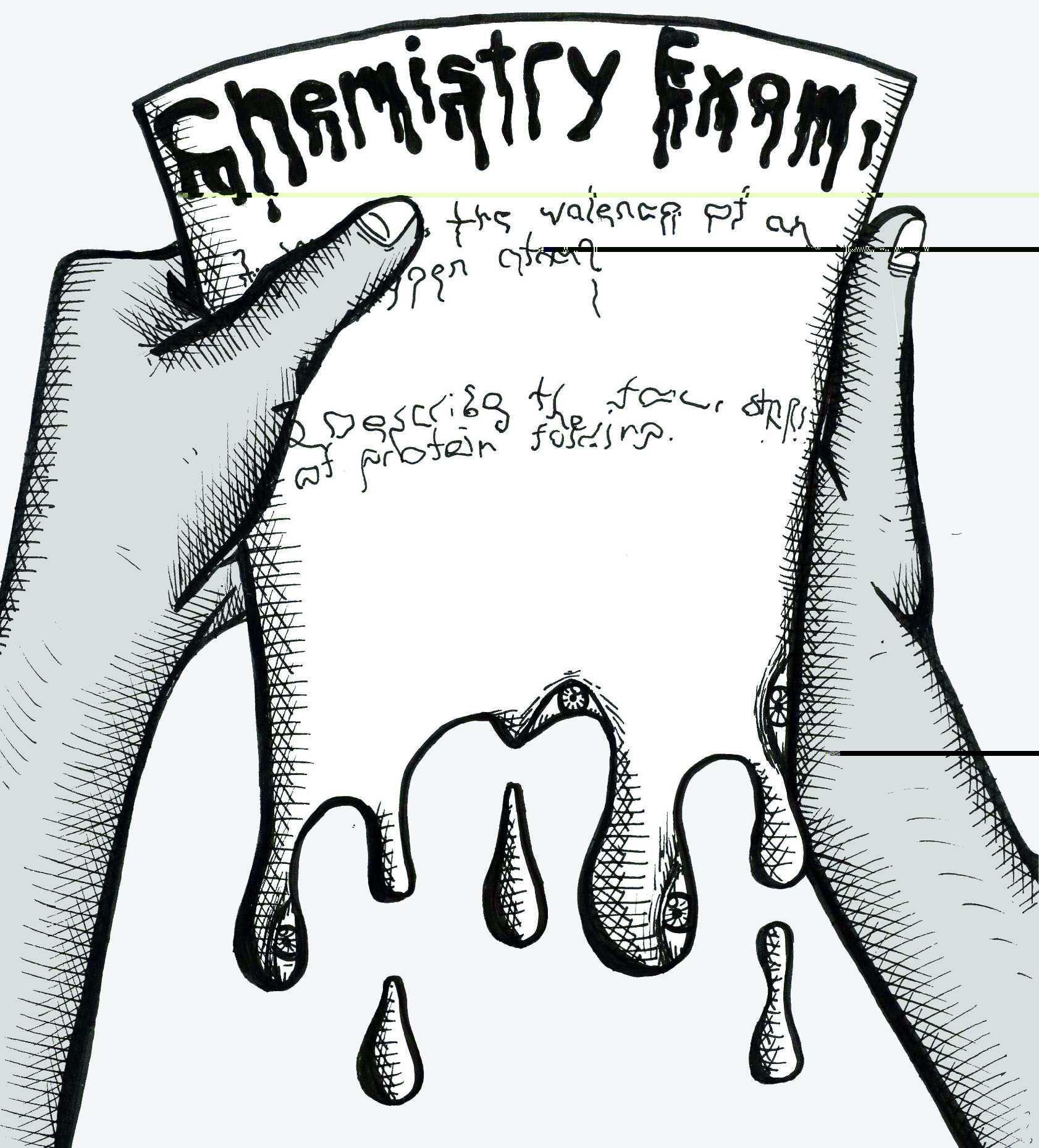 Photo:
As Washington, D.C., works out the kinks of its newly legalized medical marijuana industry, and as Californians prepare to vote on legalizing marijuana for recreational use in the November elections, people across the country turn their attention to the question of marijuana's place in society. For some Blazers, few places are off limits for weed - not even school. One 2009 study from Monitoring the Future, a University of Michigan-backed foundation that studies youth behavior, found that one third of high school seniors reported smoking within the past year; of those students, 15 percent reported being high at school. These numbers suggest that at Blair, a school of 2,788, as many as 143 students could come to school high each year. Yet assistant principal Suzanne Harvey estimates that only three to six students are caught each year for drug- or alcohol-related infractions. So what happens to the other 140 students? Just about nothing. For the Blazers who are flying high, under the radar, school is just another place to smoke.

Marijuana is a common drug of choice for many teenagers across the nation, often picked due to its accessibility and a widespread belief that it is a relatively harmless drug. Most people are drawn by the high they get: a distorted perception of time, sights and sounds, an inclination to laugh at anything. Along with inhalants, alcohol and cigarettes, marijuana is one of the first illegal substances teens use; according to Monitoring the Future, about 15 percent of students have smoked weed by the eighth grade.

Jeanette, a senior, took her first hit at age 13. By the time she reached her freshman year, she was coming to school high nearly every day. Unable to smoke at home under the suspicious eye of her mother, she would join her friends, passing a joint behind the trees bordering the athletic fields during lunch and after school. These days, she smokes less often - only "sometimes."

Adrian, on the other hand, describes himself as a "recreational user," estimating that 95 percent of the time he smokes, he's with his friends. He recalls listening wide-eyed as a middle-schooler to his older friends describe the adventures they had while high or drunk. Enticed by the promise of "glorious" times, he tried weed for the first time the summer before his freshman year. He explains that after he first took up smoking, his parents were concerned, but they soon got used to their son's habits of partying and smoking. "They got accustomed to the idea that I'd be going out at weird hours, doing who knows what," he says. "They have lax parenting skills — or, should I say, a lack of parenting skills."

Now, Adrian says, he smokes most often in social settings, when he's at parties or hanging out with friends. In fact, on many of the occasions he has come to school high, it's been after a night of smoking and drinking with friends. Typically, his friends will sleep over after partying all night. The party continues when they wake up in the morning and smoke the leftovers. Then, stoned and hungover - or even still slightly drunk - they walk into their first classes, beginning just another school day as a Blair blazer.

For Maria, a junior, school days occasionally begin with smoking a joint in her bathroom (windows always left open) or on the walk to her bus stop. Depending on both the quantity and quality of the weed she smokes, her high will last anywhere from one to four hours. She smokes less in the fall, when she plays for a Blair sports team. Instead, she prefers the winter. "It's a nice outdoor activity," she says, even in the cold. Some days, she smokes during lunch at different locations across the campus. During classes when she's high, mundane things - a funny sounding word, a small joke - entertain her more. "The little things are much more amusing," she says.

But, according to medical officials, school is not the best place to smoke. According to Dr. Ruben Baler, a scientist at the National Institute on Drug Addiction, one of the key active ingredients in marijuana, THC, impairs the functions of receptors in the brain, which makes it difficult to create new memories while high. High students who are supposed to be learning, says Dr. Baler, have trouble remembering their lessons. And that's only if they're paying attention: Marijuana also impairs ability to concentrate, often causing a drop in grades.

Maria has found just the opposite to be true. She smoked weed for the first time at age 13, soon escalating her usage until she was coming to school high two or three times a week in her freshman year. The point where she was smoking the most heavily — the final quarter of her freshman year — was when her grades were the highest, she says. Since she was sleeping more at home, she says, she would be more awake in classes when sober, allowing her to retain more information.

For Adrian, a self-described "really good student," academics are always a concern, even when he wants to smoke. He says that if he knows he has a big test or quiz that day, he will stay sober. But occasionally, when he knows his day will be low-key, he'll come to school baked. "If I'm just watching presentations all day long, why not make it more interesting?" he says slyly. He says he smokes most often in May, when the workload starts to wind down.

According to Dr. Baler, short-term effects of marijuana include lack of motor control, lack of balance and difficulty remembering information. These signs, along with red eyes and sleepiness, are what security guards look for to determine if a student is high, says security guard Maureen Walsh. If a student were to get caught, he or she could face up to 10 days of suspension and a police referral, according to Harvey. Both Harvey and Walsh stress that the emphasis is on rehabilitation, not repercussions. "It's not just about punishments, it's about getting the resources to help the student," says Walsh.

But many of Blair's blazers have figured out how to slip by, high but undetected. Adrian says that common sense has been enough to protect him. He has never smoked on campus and he does not bring drugs with him to school. "I am not a moron," he says. As a result, he says, he has never been afraid of getting caught.

Maria doubts that she will ever get in trouble for being high at school. Since Blair is so huge, she says, she finds it easier to blend in. In a class of 30 students, she says, it's impossible for teachers to inspect all students for sobriety. "There's no time to look into all of their eyes," she asserts.

As long as Maria is not acting high enough to attract suspicion, she says, she feels safe. And since her sober personality is somewhat eccentric, she can pass for sober even when she's not. "I'm less wacky when I'm high in class," she says. "I think teachers like me more."

Jeanette says that when she's at school, she's never high enough to be caught. "It's just enough to get me through the rest of the day," she says, explaining that school can be too boring when she's sober. A few times, a teacher may ask Jeanette, "What's wrong with you?" if she's zoning out. Jeanette has found a simple "Nothing" is enough to deflect suspicion.

This seeming lack of awareness on the part of teachers surprises Jeanette. Obviously, she says, she's glad to not be caught. But she finds it ridiculous that students can clearly be acting intoxicated without teachers saying anything. "Students can be obvious in front of teachers, and they'll still not say anything," she asserts. "Maybe they're not seeing what's really happening."

But Adrian suspects that his teachers know more than they let on. For instance, last year on April 20, a day set aside by many smokers to celebrate and smoke marijuana, many of his teachers were suspicious of some students, though Adrian didn't see anyone reported. He thinks this leniency might be because the teachers have good intentions. "They're nice people," he says. "They generally want to see us in school instead of in prison…I'm not complaining." Adrian eagerly anticipates the spring, when he will be a second semester senior with a light workload, no stress and plenty of time to "have fun." Chances are he won't have trouble finding people to join him, because as long as the risk stays low, these Blazers will continue to get high.