Graduation takes its toll on relationships between seniors and non-seniors

There is a question after high school which applies to some, but not all Blazers. Many find themselves asking, "Should we stay together after graduation?" It's a simple question that makes high school sweethearts ache, the days bitter but the moments sweet. This question is especially trying for relationships between seniors and non-seniors, as neither person is in the same life situation. 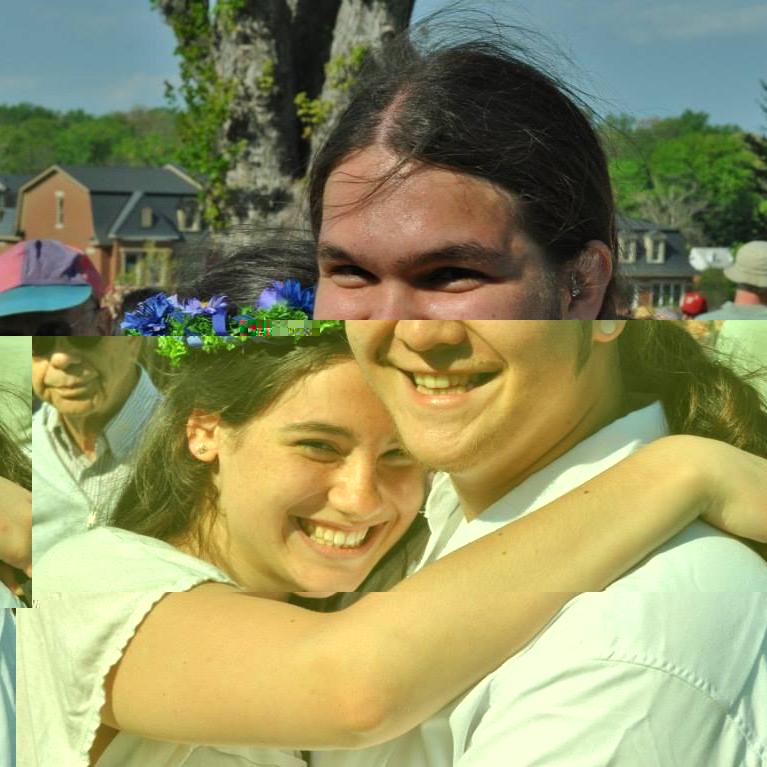 Photo: Liam Johnstone and Rowyn Peele met each other at a Christmas play they were both working on. Because Liam is going off to college, they're going to try to do an open relationship. They have uneasy feelings about this.

Photo: Liam Johnstone and Rowyn Peele met each other at a Christmas play they were both working on. Because Liam is going off to college, they're going to try to do an open relationship. They have uneasy feelings about this.

Rowyn Peel, a sophomore, and Liam Johnstone, a graduated senior, are sitting together at the Spring Park pavilion in Takoma Park. Johnstone is attending Warren Wilson College in North Carolina this fall, leaving Rowyn to weather high school without him. They aren't quite sure what their future plans are, but currently they're leaning towards an open relationship. This won't be easy for them. "I feel that open relationships are a little bit weaker than exclusive relationships. There are people who are closer who you could be more intimate with," Johnstone says. Even then, Johnstone worries that finding people who are comfortable with the idea of an open relationship would be difficult. Peel has already had an open relationship before, but the experience wasn't positive. "After a while I just didn't know them anymore because I never saw them," she says.

Danny Do, a graduated senior, is off to the Marine Corps. His girlfriend, sophomore Maris Medina, will continue attending Blair. They're planning on staying together, as they've already been dating for a year and a half. Do first goes away in July for 9 weeks to a Marine boot camp in South Carolina. At the Marine boot camp, he won't be able to bring his phone or any other communication devices, however, he can write letters and take phone calls that aren't through his cell phone. Skype and texting have ruled as this generation's key tools to stay in touch over long distances. This type of communication may seem daunting to those who are accustomed to personal intimacy, but Do and Medina aren't phased. "We'll have to rely on letters, which I think is fine. It'll be cute. It'll be more romantic that way and the sense of urgency isn't there," Medina beams, "we have to pick what we want to write instead of saying everything that we would say on the phone."

Just a heartbeat away

However, the focus on how to manage a relationship is bound to the obvious issue of distance. For instance, junior Rachel Ederer is anticipating communicating through text with her boyfriend, graduated senior Stephen Varella, who will attend either Morgan State University, in Baltimore, or Tuskegee University, in Alabama. "It's not as emotional. You know how you can never tell someone's emotions over text? I prefer in person," Ederer says. Gage Hack will be attending Montgomery College in the fall, so he isn't worried about the distance him and his girlfriend, junior Vicky Nguyen. There is some uncertainty, though. "The only thing I fear is that I can't protect her," Hack says.

Though Johnstone has seen long distance relationships work in the past, he is pessimistic about the idea of them. "If I travel abroad or something, it gets to a certain point where it's like maximum fondness to absence, and then it's like 'I hate you! You abandoned me!'" Mostly, he and Peel worry about not being able to hold hands, or snuggle. "We're both very physical people. Taking that entire element out of our relationship makes it difficult," Johnstone contemplates. Medina is nervous as well. "I won't have him accessible. I won't have him there and that's going to be very hard for me. I spend a lot of time with him, so that's going to be a big change," she says.

Close to the heart

Ederer likes her boyfriend, but she's ambivalent about the situation of him going to college. "You can't be too hopeful. Hopeful is a weird word, because if you raise your expectations for what it is, then it can be preparing you for a worse break up," she explains. The logic she's worked out about high school relationships is that, "what happens, happens." With a realistic view of the long distance relationship, Ederer is prepared for what she may face.

The consensus between long distance couples is that communication is key. "I know a lot of relationships that are successful long distance, they find time to communicate during the day," Medina says. However, the point of a long distance relationship is that it stays a romantic one. Distance aside, it's important that somehow each person understands the other. "I think if you care enough about someone then it shouldn't matter where they are, they'll always be in your heart," Peel believes.