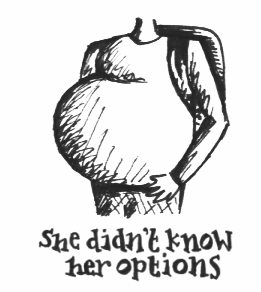 Abstinence-only curricula are limited to the discussion of abstinence and the failure rates of contraceptives, according to Advocates for Youth, a nonprofit organization in Washington, D.C. dedicated to educating youth about their sexual health. On the other hand, comprehensive sex education is all-encompassing, encouraging abstinence while promoting the use of contraceptives. This approach provides an alternative for sexually active students, while abstinence-only programs remain ignorant to the vast number of teenagers who inevitably have sex every year. In 2006, a staggering seven out of ten teens had had sex by the age of 17, according to the Guttmacher Institute, a nonprofit think tank that conducts research on reproductive health.

It is important to teach abstinence in the sex education curriculum, but simply presenting the failure rates of contraceptives is a flawed solution that may even lead to pregnancy. If sexually active teenagers learn that condoms and other prophylactics are ineffective, most teenagers will avoid using them. This will increase the risk of pregnancy and the chance of contracting a sexually transmitted disease (STD). In fact, Max Siegel, 23, was infected with HIV as a 17-year old as a result of the lack of information about contraceptives in the limited abstinence-only curriculum. Siegel, an active blogger against abstinence-only education, declared on his blog that the "abstinence-only message did not prepare me for life." Because he did not learn to assert the use of contraceptives, he had to suffer the consequences of unsafe sex. If teenagers do not receive adequate sex education, they, like Bristol, may have to decide how to care for a child and make other choices that they are not ready for – emotionally or financially.

In 2003, 80 percent of the most popular abstinence-only education curriculum contained "false, misleading or distorted information about reproductive health," according to a study by the U.S. House of Representatives Committee on Government Reform. The failure rates of birth control were among the incorrect facts taught to students. Because comprehensive sex education covers abstinence while excluding these failure rates, abstinence-only education has little value.

Although abstinence is the only entirely reliable way to stop the spread of STDs, condoms are extremely effective in reducing the risk of infection from STDs, according to the Mayo Clinic. But in the abstinence-only curricula studied by the Committee on Government Reform, condoms were said to allow the spread of STDs 31 percent of the time - an erroneous statement, according to the study. Condoms also have an important role in preventing pregnancy. They are successful in preventing pregnancy 98 percent of the time, according to the Sex Education Library website.

Many proponents of abstinence-only education claim that it is the only moral way to approach sex education. However, teenagers will watch the quality of their lives decrease once they are plagued with finding the mental and financial means to support a child. This possibility requires the adjustment of moral values that hinder these teenagers from learning ways to prevent pregnancy. And comprehensive sex education is, in fact, moral because by informing teenagers about their choices, educators are not promoting sex, but merely encouraging protection for teenagers who are already sexually active. The fact is, an alarming number of teens have sex every year - more than half, according to the Guttmacher Institute. Questioning morality is a waste of time - teaching ways to prevent pregnancy is necessary.

When Maryland tested an abstinence-only education program in specific areas of the state from 1998 to 2002, there was a decrease in the number of teens who declared that they would avoid sex until the end of high school or marriage, according to Advocates for Youth. Tried in other areas of the country, this program also failed to change the attitudes of its students. In fact, three of the six programs studied for their impact on sexual behavior initiated no change in the students' sexual tendencies. And out of the nine programs evaluated for their impact on abstinence, four reported no changes in the students' intention to abstain.

Teenagers shouldn't have to face the risks of pregnancy and STDs that result from abstinence-only education. Comprehensive sex education covers the important elements of the abstinence-only curriculum without the faulty information, and it prepares students to make fully informed choices about having sex. This approach is certainly more beneficial than denying teenagers information that could make them more responsible - and it would have allowed the media to maintain a focus on Palin's platform, and not her daughter's growing figure.