Vickie Adamson smiles as she remembers the secondary school teachers that inspired her. Ever since she was a child, Adamson had always known that one day she would teach. 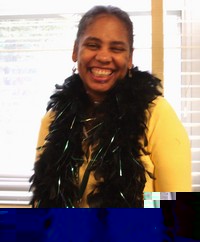 Adamson has taught at Blair for ten years. She is the head of the English Department and teaches American Studies, a class that focuses on "contemporary American literature" and studies works by authors such as Toni Morrison and William Faulkner. As department head, Adamson also serves as a resource to other teachers.

Adamson was born and raised in California. She attended the University of California, Los Angeles, where she obtained a bachelor's degree in English and a master's degree in African American Literature. Afterwards, she taught at Washington Preparatory High School in California.

Adamson's most memorable teaching experience took place in her first year on the job. She recalls standing in front of the classroom trying to quiet down her class, which was "particularly antsy" that day. She finally calmed down her students after trying for 15 minutes, and at that moment, someone in the hallway threw a doughnut through the open transom, a window built above the doorway. The doughnut hit Adamson on the side of her head, leaving her hair covered in crumbs and her class in uncontrollable laughter. "It was just one of those days when you say, 'Why me? Why?'" she says with a chuckle. "I'll never forget it." She was unable to catch the culprit who threw the doughnut.

Flying doughnuts aside, Adamson loves teaching. She earned a California teaching credential and taught in California for nine years before coming to Blair. "I've always wanted to be a teacher," she says. As a child, she often gathered up her dolls and teddy bears and played school. Adamson's own teachers served as role models for her. She fondly lists the teachers, from kindergarten right on up through high school, that motivated her to teach. "I just had such great teachers, and they were such fun, and they made learning wonderful," Adamson says. "I found those people inspirational, and I wanted to follow their footsteps."
She especially enjoys the learning that comes with teaching. "What I like most [about teaching] is that it's always challenging and it always changes," Adamson asserts. "I learn from my students, and I think it keeps me energized and interested."

When she is not teaching, Adamson watches old TV shows, reads, writes, and spends time with her two sons. Together, they take pleasure in pastimes such as drawing, building trains, and other arts and crafts.

Adamson also enjoys working on the dollhouse she is building. "I started it last summer and I'm still working on it," she says proudly. "It's a Victorian dollhouse. It's rose colored with blue and white trim." Adamson likes the miniature furniture that she fills the house with. "I buy a lot of furniture from the Smithsonian, and I go on-line," she explains. Unsatisfied with the seven rooms the dollhouse originally had, she has built additions of a kitchen and a bathroom. The dollhouse is complete with wallpaper and wooden floors, and she plans to take a step further with her next dollhouse. "The next one I'm going to wire and put lights in it," she says.

As for the future, Adamson would like to return to school to earn a Ph.D. but has decided to wait until her sons are older. "I don't want yet another thing that demands my time," she concludes. In the meantime, Adamson is happy to be a teacher.