Addicted to a deadly drug: a teenage crisis

JUULs and e-cigarettes are fueling a teenage nicotine epidemic.

A hit at the back of the room or a rip in the bathroom with friends. Watermelon, mint, mango, or cucumber flavorings. A sleek and easy design for a unique “vapor experience”. These aspects of a JUUL are just some of the superficial marketing tactics that are being used by the company to attract future electronic cigarette users. There is only one problem. JUUL is drawing the wrong crowd.

Alarmingly, there has been a recent rise in teenage juuling, a new type of vaping pen. Originally, JUUL was made to help addicted smokers quit smoking and eliminate the traditional cigarette. Ironically, JUUL is now helping to create the next generation of smokers. Attracted by JUUL’s compact designs and enticing flavors, teenagers have now been introduced to the dangers of nicotine. Through online peer pressure and glamorized ads, the internet and social media are only making this dangerous spike in adolescent e-cigarette usage worse.

Everyone knows that smoking kills. Lung cancer, heart attacks, strokes and even death are some of the well known consequences of smoking.

JUULs should be a safer alternative, right?

Wrong. In fact, this is a common misconception of e-cigarettes. One of the most cited reasons for continued smoking is an early start. Young smokers often have the you-only-live-once mentality, believing that they could quit smoking at any time. However, the director of the Duke Center for Smoking Cessation comments that young smokers will ultimately “lose their capacity to make a free choice to smoke”. The World Health Organization even calls nicotine a “gradual killer”.

Despite what you may think, the flavored liquid in JUULs does contain nicotine. According to the National Center for Health Research, one JUUL pod has the same amount of nicotine as a pack of cigarettes. The use of multiple pods in one sitting can cause the amount of consumed nicotine to reach dangerous levels. 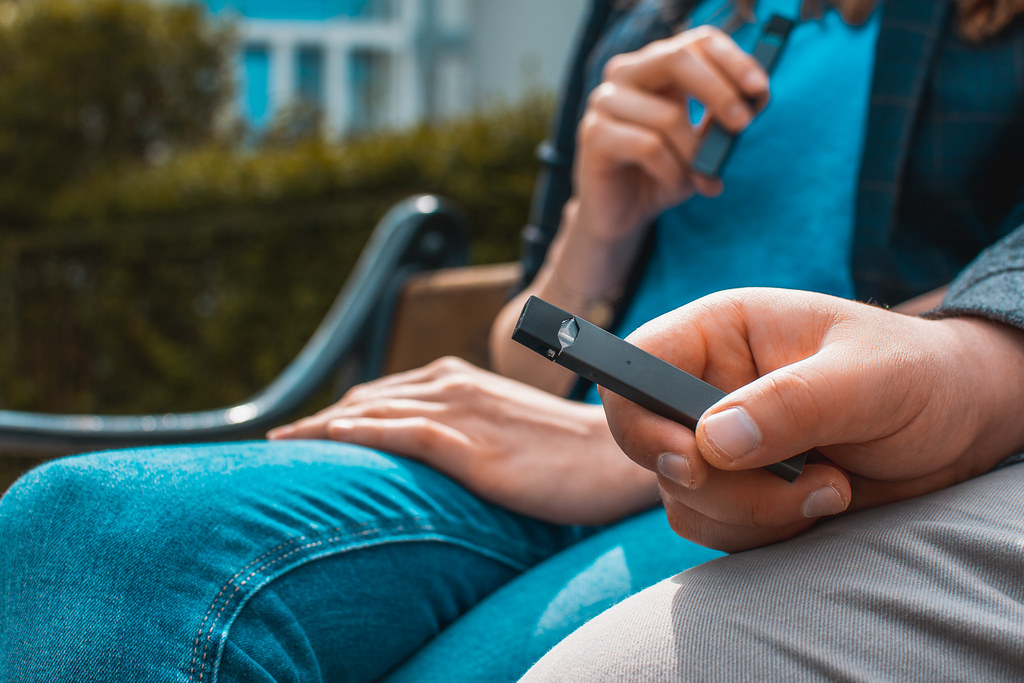 Photo: E-cigarettes and JUULs are taking over teenagers.

Photo: E-cigarettes and JUULs are taking over teenagers.

Adolescents who fall victim to “juuling” are introduced to nicotine at an unacceptably young age. According to a study conducted by the American Journal of Medicine, non-smokers are four times more likely to start smoking traditional cigarettes after only 18 months of vaping, which includes juuling. Vaping as a teenager can start a lifetime of misery.

Vaping and juuling have been proven to be horrible for teenagers, and most people know it. If that’s the case, why is juuling among teenagers still so rampant? The answer is in our phones and in our friends.

The irresistible desire of wanting to fit in can compel us to make poor decisions. Likewise, with juuling, peer pressure and high school culture can make vaping seem like a “fun” activity. Social media ads promoting e-cigarettes can make the impulse to buy even more uncontrollable.

Additionally, Hollywood level celebrities and influencers who vape or promote vaping can add to the teenage vaping epidemic. Rappers like A$AP Rocky and Snoop Dog who have their own vape products or Youtubers like David Dobrik who shows vaping in his videos can convey a very bad message to teens - that vaping is “cool”.

In order to fight the rise in adolescent vaping, society needs to change as a whole. Netflix recently announced plans to exclude smoking and tobacco scenes from new shows and movies. Other social media platforms need to follow suit. Instagram, Youtube and Snapchat, among others, should start flagging vaping/juuling content as inappropriate.

Influencers also need to be a part of the solution. Celebrities need to stop condoning vaping and start creating movements to end this wave of teenage addiction. Celebrities and influencers are the best outlets to create change and get teenagers to listen. Harsher laws also need to be passed for underage vaping/juuling. Since the JUUL is so compact, it is easy to hide. Tighter security and stricter rules in schools must be enforced.

Society must implement change now. If we don’t, the number of nicotine-addicted teenagers and inevitable early deaths will continue to rise.