In 2008, Blair students took 1,708 Advanced Placement (AP) exams, according to a February 2009 memorandum from the MCPS Office of Shared Accountability, while in 2009, Blair students took 1,998 exams, according to Jody Leleck, chief academic officer for Montgomery County schools. The number of exams increased by approximately 17 percent from 2008 to 2009.

The increase in AP exam participation at Blair was reflective of the overall trend in MCPS. In 2009, MCPS students took a total of 28,575 AP exams, a 10.2 percent increase from 2008, according to Leleck. In 2008, students throughout the county took 25,921 exams, according to the memorandum. 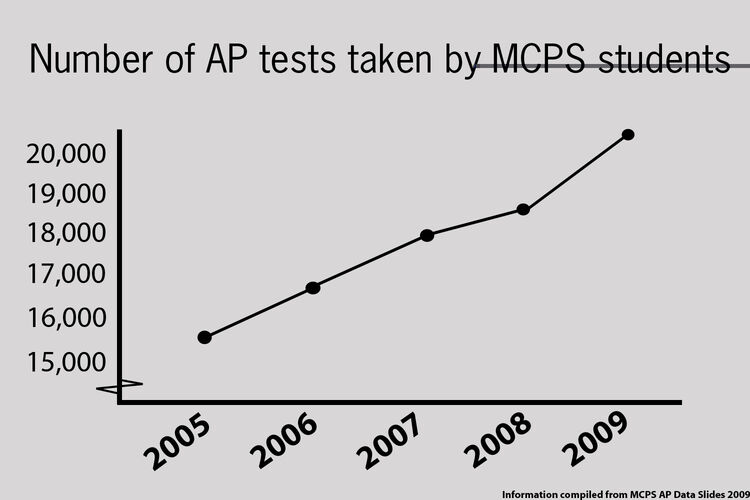 Photo:
The increase in the number of AP exams taken in MCPS and at Blair in 2009 resulted from increased student and parent awareness about the importance of taking college-level courses, said Leleck. Johnson said that Blair shares information about AP classes at parent meetings and with students during the course registration process.

According to Johnson, more students are seeing the value in AP classes, as well as becoming more experienced with AP classes as the years go by. Johnson also said that students encourage their peers to take AP courses. "Students tend to listen to the experiences of other students," she said.

Increases in AP exams can also be linked to county-and school-based encouragement and support. MCPS has a "cross-functional M-Stat team," a team that reviews data to monitor all of the system's goals and benchmarks, including APs, according to "Our Call to Action: Pursuit of Excellence The Strategic Plan for the Montgomery County Public Schools," approved June 2009. Encouragement and support are also available at the individual school level. "All schools develop their own strategies for encouraging students to enroll in either AP courses or IB courses and provide various support programs to help students be successful," said Kay Williams, director of Accelerated and Enriched Instruction for MCPS.

Blair also implemented a new class last year to help students develop skills for honors and AP classes, such as time management and study skills, according to Johnson. AP Honors Support is available for one semester or all year, with 13 Blazers enrolled in the class this semester, according to AP Honors Support teacher Joseph Fanning. Johnson said the course was beneficial to students last year.

Fee waivers for the AP fee from the College Board, Blair and the county that enable students with financial hardships to take AP exams also contributed to the increased number of AP tests, according to Johnson. "The Maryland State Department of Education has entered into a fiscal contract with the Federal Government Grant Program and The College Board, allowing public and private schools to provide AP exam fee waivers for students who meet eligibility requirements based on family income. Additionally, schools help when a student needs financial support additional to the state waiver or the College Board waiver," said Williams.

Leleck said that AP classes are more accessible than they were a decade ago, when students had to meet more criteria, such as having taken prerequisite courses, to enter an AP class. "While in the past there were pre requisites, any student with the ability, the potential or the motivation may enroll in an AP or IB course. Schools encourage students to challenge themselves and do much to support students in order that they have a positive experience," said Williams.

At Blair, 88.8 percent of exams scored a three or higher in 2009, according to Leleck. This is a slight decrease from 2008, when, according to the memorandum, Blazers scored at least a three on 90.2 percent of exams. However, the percentage of exams scoring at least a three at Blair is still significantly higher than the county average. Blair's teaching staff contributes to the high percentage, according to Johnson. "Our students have done very well; we attribute that mainly to the teachers. The teachers prepare the students for the AP exams very well," she said.

Examining the AP
Advanced Placement (AP) classes are college-level courses in which students have potential to earn college credit. In America, 90 percent of four-year colleges give credit for qualifying AP exam scores (typically a four or five, sometimes a three). Receiving college credit for an AP course is beneficial because it allows the student to have time to pursue more classes in college or potentially study abroad or double major. There are over 30 AP courses, including in subjects ranging from Calculus to U.S. History to Music Theory.