After Prom fundraiser to be held at Barnes & Noble this Saturday

As the sales made to those who mention Blair go up, so does the net percent given to the school. "The profit is on a sliding scale as to how much we make," PTSA recording secretary Debra Reed-Gillette said. The school receives 10 percent if sales go up to $2000, 15 percent up to $10,000 and 20 percent above that. 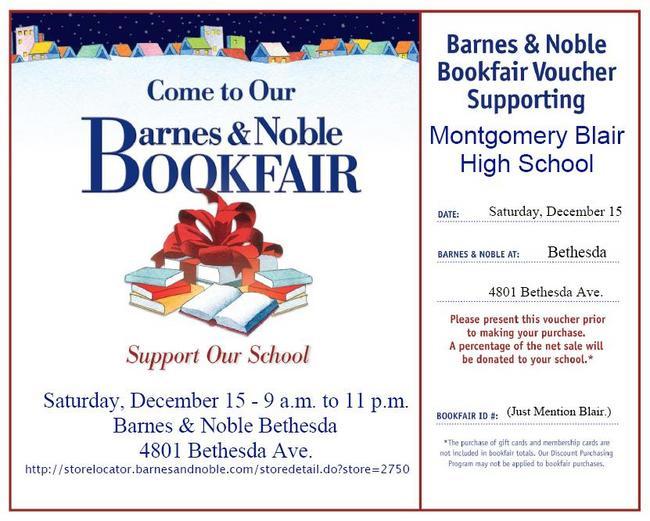 Photo: The voucher for the Barnes & Noble bookfair. Photo courtesy of Ottalini and the PTSA

Photo: The voucher for the Barnes & Noble bookfair. Photo courtesy of Ottalini and the PTSA

Blair groups such as the chamber choir, InToneNation and Action Jackson and the Go Getters, an air band, are scheduled to perform, according to Gillette. Blair's cheerleaders, Pom Squad, Step Team, Middle Eastern dancers and Jazz Ensemble have also been contacted to perform but have not yet confirmed their participation.

There will be two tables set up at Barnes & Noble where volunteers will hand out fliers reminding shoppers to say they support Blair when making purchases, according to PTSA volunteer coordinator Elizabeth Martin. The volunteers at the tables might also be asked to make recommendations for gifts, she said.

The Media Center has provided the PTSA with a wish list so that students and parents can purchase books for the library or specific teachers, according to PTSA co-president Dave Ottalini.

Blair's academies are also invited to Barnes & Noble to set up tables. "I've invited some of our academies to come and bring one of their display boards and just be there to talk about what the academies are doing," Ottalini said.

This is the first year Blair has done an After Prom fundraiser with Barnes & Noble, according to Ottalini. The store contacted Blair in October and the PTSA has been planning the event for over a month now. "[No] fundraisers like this happen overnight," Ottalini said. "They take a lot of time and effort."

Volunteers are still needed to help out at the fundraiser. "We've divided the day into two-hour shifts," Martin said. "I have at least one person for all shifts but I need four per shift."

Cook stresses the need for volunteers for the whole After Prom effort, which is expected to require $20-$24 per person, adding up to at least $15000, according to Cook. "Fundraising is something that we view as separate from the planning of [After Prom]," she said. "We have been looking for people to take on a leading role in terms of fundraising."

Ottalini emphasizes the importance of such fundraisers. "The money that we earn goes right back to our students and will help them have a safe and fun experience after the prom next year," he said. "It really goes for a good cause because After Prom is such an important activity that we help sponsor."