"AI" take eight: not so great

In many cultures, eight is considered a lucky number. In our solar system, eight planets orbit around the sun (but we will never forget Pluto). In an octave, there are eight notes. Considering such, your "American Idol" experts here at Silver Chips Online had high hopes for season eight of "AI," expecting staggering vocal performances and tough competition. But, alas, eight appears to have failed us.

Other than the useless introduction of judge Kara DioGuardi - who has twice the mean of Simon Cowell but half the capacity for constructive advice - "AI" eight appears to be an uneventful season of no particular standouts. This week, we wearily watched the typical drama and trauma of Hollywood "Hell" week and remained unimpressed with many of the contestants - the only notable development was that Bikini Girl, who inexplicably captivated the male judges with her, erm, abundant charm, finally made her prancing departure (Simon saw the light!). Nevertheless, we made do with what we had and have compiled a list of key singers remaining in the competition. 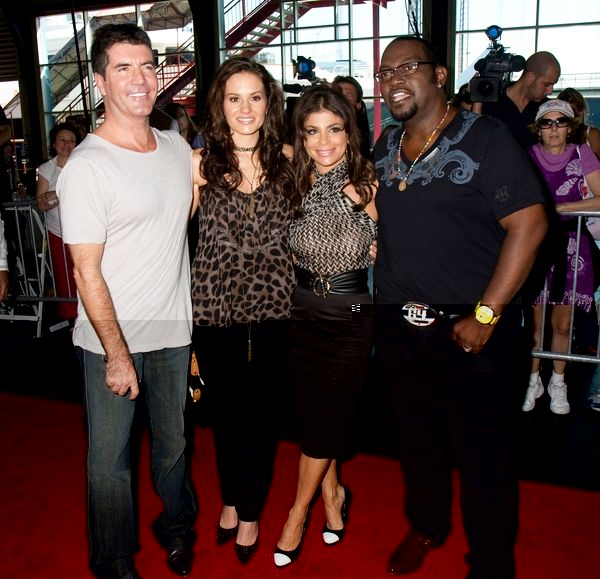 Photo: The crew hoped to spice up the panel a bit with new judge Kara DioGuardi. Picture courtesy of PR photos.

Photo: The crew hoped to spice up the panel a bit with new judge Kara DioGuardi. Picture courtesy of PR photos.

A cute guy with a career in stage acting, Lambert gave a decent stab at Queen's "Bohemian Rhapsody" during the auditions. His vocals were a little whiny and performance needlessly theatrical, but he was one of the better singers featured that night. In Hollywood, he gave a better demonstration of his range and we must admit, the boy can sing. Here's a definite front-runner - not to mention a potential chick magnet.

Anoop Dawg's in da house! Standing in a button-down shirt, cargo shorts and flip-flops, Desai belted Boyz II Men's "Thank You" and pleasantly shocked the judges and the home audience with his flawless R&B voice. He was again featured during the solo performances during Hollywood week as a consistent vocalist, receiving more accolades from the judges. His geeky appearance notwithstanding, Desai has a sort of measured confidence about himself and a cute sense of humor, which will appeal to many AI voters.

Sixteen-year-old Jasmine Murray's rendition of Fergie's "Big Girls Don't Cry" was the epitome of a perfect audition. Shining with a big and powerful voice, Murray had lungs comparable to that of a younger Jennifer Hudson. Plus, another big bonus for Murray was that Simon called her "commercial," which means she brings the whole "Idol" package. She flew through part one of Hollywood week with singing praises and escaped a near snag during group performances. Despite iffy partners and an ill-prepared routine, she was the only one to hold her part and, hence, the only one from her group to make it through to the next round.

From the get-go, Joanna Pacitti could not go wrong. Not only was she formerly signed by A&M and Geffen Records, but also - oh, just a minor detail - Britney Spears covered one of Pacitti's songs on "Circus." And Pacitti didn't disappoint. She gave a robust performance of Pat Benatar's "We Belong Together" at her Louisville audition, striking every note with strength and conviction. Even though she wasn't in front of the camera much during Hollywood week, we have no doubt that she remains one of the stronger singers in the competition.

With only 12 yeses total, San Francisco was a surprising disappointment. In the midst of all the commonplace singing was a gem in the form of Kai Kalama. His song of choice was "Smoke Gets In Your Eyes" by the Platters - and what a fitting choice it was. The whole performance can only be described as lovely - to quote Paula, he had a really "nice timbre" to his voice. Kalama's warm, baritone vocals and sweet smile will surely make pudding out of fangirls. Although Kalama wasn't in focus much during Hollywood, he is still in the running, which is a good sign for his fans.

Above all shines Lil Rounds, a 23-year-old customer service rep with an awesome name. Singing Stevie Wonder's "All I Do" at the Kansas City auditions, Rounds displayed good stage presence, soulful and rich vocals, careful vocal control and a refreshing humility about herself, reminiscent of one David Archuleta. In Hollywood, she awed the judges by tackling Whitney Houston's "I Will Always Love You" and secured herself a position as one of the front-runners of the competition.

Crooning "Can't Help Lovin' Dat Man" from the 1927 musical "Show Boat," Corkery made the Broadway song contemporary and expressive using her versatile voice. With a shocking set of tattoos along her right arm, Corkery not only showed the judges her soaring pipes, but also demonstrated a most unique singing style. We haven't seen her in action much yet, but we look forward to what else she can bring.

Photo: Lil Rounds was surprised to receive such praise from the judges. Picture courtesy of americanidol.com.

Photo: Lil Rounds was surprised to receive such praise from the judges. Picture courtesy of americanidol.com.

Here comes Scott MacIntyre with the inspirational story of the century. A blind intellectual and musical virtuoso who taught himself how to play the piano and graduated college at age 19 - not that he needs to play the pity card - MacIntyre initially charmed the judges with his pitch-perfect, soothing rendition of "And So It Goes" by Billy Joel at the Arizona auditions. He's not your typical "Idol" contestant, but it'll be fascinating to follow MacIntyre's journey.

Most people who try out for "Idol" multiple times consistently do poorly and then finally give up. T.K. Hash is an exception. Taking the judges' advice after a failed attempt last season, Hash was back at auditions - new, improved and ready - singing John Legend's "Imagine." Although his voice may not be the best, his sheer determination and ability to absorb constructive criticism is crucial in keeping him in the competition.

Von Smith - a thoroughly irritating but capable singer. Belting "Over The Rainbow" for his audition piece, Smith overloaded the classic with licks and runs and just plain over-the-top madness. But he was a risk-taker with an impressive range for a male singer, and the judges liked that. Come Hollywood, however, his version of James Morrison's "If The Rain Must Fall" did not do him any justice; in the always articulate words of Simon Cowell, it was "indulgent nonsense." Nevertheless, he's got another shot and we can only hope he'll get the hint and learn better control of his voice.