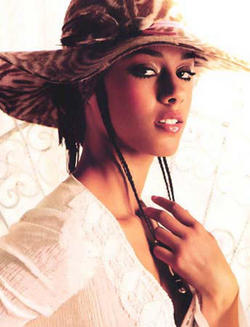 Photo:
"Unplugged" is a collection of Keys' top tracks and a sampling of what's to come. Songs like "If I Ain't Got You," "You Don't Know My Name" and "How Come You Don't Call Me" are delivered with the same striking voice that has graced Keys' albums, "Songs In A Minor" (2001) and "The Diary of Alicia Keys (2003)."

From the first few tracks, Keys establishes the flow of the album, with each song leading right into the next. In fact, it is almost impossible to press the stop button; the whole CD sounds like one song. The fluidity of Keys' music can be attributed to her presence, her attractive voice and her outstanding band.

The album opens with the one-two punch of "Karma" and "Heartburn," which meld together to sound like one song. The tracks garner listeners' attention, establish Keys' vocal proficiency and prove her backing band's adaptability and creativity. Though the tandem of starter songs hails from 2003, it takes listeners to the same R&B nirvana they did when she first recorded them.

Keys' new songs are equally as pleasing to the ears. "Wild Horses," featuring Adam Levine of Maroon 5, covers the Rolling Stones with an inspiring and soulful feel. "Stolen Moments" starts slow, but edges towards Keys' gut-busting high notes and lets the jazzy sound of her band loose.

"Streets of New York" is an oddity on the CD, as Keys speaks poetic rhymes over a poetry-slam type beat, complete with slow bass and resonating piano chords. However, the more than seven-minute track evolves into a go-go-like cut with Keys roaring out high notes all over the place.

Though Keys is the star of the show, she also has a strong supporting cast. Her band and backup singers complement her voice brilliantly, and the entire set sounds as if it were recorded to perfection in a studio. The harmonizing backup singers allow Keys to belt out her favorite lines with the confidence that the song's lust will not be lost.

On "Diary," Keys delivers another smooth and stellar singing performance with a backing of jazzy drums and flute that spice up the former hit. "Fallin'," Keys' first and most famous single, is reworked for her live set, adding drama and a mysterious violin to the mix.

The lone disappointing track of the set is "If I Was Your Woman," on which Keys covers Gladys Knight. On the track, Keys seems to be channeling R. Kelly more than Knight, turning the song into a romantic "I Believe I Can Fly"-like tune that is uncharacteristic of Keys' style.

The set concludes with the upbeat "Love It or Leave It Alone/Welcome to Jamrock," on which Keys invites rappers Mos Def, Common and up-and-coming reggae star Damian Marley to the stage. The track is a fun, wild and fitting finale to a deep R&B album. Keys provides the choruses for the two-in-one track, even imitating the reggae sample of "Up in the streets/ They call it murder" for Marley's "Welcome to Jamrock."

On "A Woman's Worth," Keys sings "A real man just can't deny/ A woman's worth." There is no room for argument there, as Keys' worth cannot be denied. Alicia is a unique R&B star- she does not need a verse from a rapper on her songs to make a track "hot," and yet her old-school style remains well-received by even the most hip music fans.