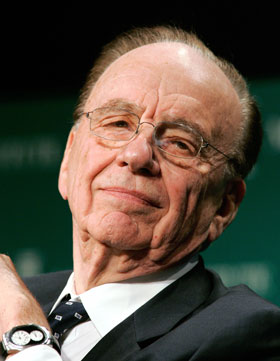 Photo: Rupert Murdoch, owner of the media conglomerate News Corporation, is under extreme heat for the phone-tapping scandal at the News of the World.

Photo: Rupert Murdoch, owner of the media conglomerate News Corporation, is under extreme heat for the phone-tapping scandal at the News of the World. Photo courtesy of NYTimes.com.

News of the World is having a terrible, horrible, no good, very bad press week. The notorious United Kingdom tabloid is caught in its own front-page scandal; rumors of a long-standing phone-tapping network within News of the World have hit the stands. Even though timeline of this messy, drawn-out affair traces back six years, there's no telling whether the tabloid will be able to again slip its way out of this situation.

In late 2005, News of the World editor Clive Goodman broke into the voicemails of Prince William's aides to glean information for an article. A year and a half later, Goodman and the private investigator hired to help with the assignment pled guilty to the royal phone taps and were jailed. The then-editor of the News of the World, Andy Coulson, posted his immediate resignation. Authorities supposedly laid the scandal to rest.

But in early 2010, British newspaper The Guardian alleged that the hacking had extended to public figures beyond the royal family, including politician John Prescott, Parliament member Tessa Jowell, Public Relations agent Max Clifford and actress Sienna Miller. The Guardian also confirmed that, although the Metropolitan Police Service (MPS) of London had found 3,000 full and partial phone numbers in Goodman's possession, merely 8 individuals were named during the trial. The New York Times picked up the phone-tapping plot in September of that year and unveiled the findings of its own private investigation, implicating Coulson in and expanding the details of the hacking network.

On Jan. 26, the MPS – smack in the middle of a PR nightmare – wisely decided to investigate the scandal more thoroughly than before. That same day, Coulson quit his post as the Conservative Party's communications director and Ian Edmondson, an executive at News International, the publisher of the News of the World, was fired for denying his involvement in the taps. The recent MPS investigation has cast a pall on the News Corporation, the third-largest media conglomerate in the world of which News International is a subsidiary. News Corporation owner and industry titan Rupert Murdochis now under fire for his employees' dirty tricks. Whether or not Murdoch knew of the taps, he's got some explaining to do.

Still, there's some poetic justice – if not karma – in News of the World going up in flames for its lack of journalistic integrity. Paparazzi are the peeping toms of the celebrity world that thrive on bleeding dignity and snapping the bones of a hard-built reputation. Isn't it fitting, isn't it grand, that the News of the World is finally taking what it's been dishing for years?

Well, yes and no.

Take another look at that timeline. The sly dogs at the News of the World have repeatedly managed to avoid privacy lawsuits. When they are caught, they'll stick their tails between their legs and curl up in a corner until you've turned the other cheek. Then, before you know it, they've gone and done their business on the good sofa again.

Tabloids manage to escape harassment suits over and over because these pseudo-newspapers have no real responsibility to get the facts right, so long as the story sells. Libel charges are rarely viable for those constantly in the public eye, who must endure the gossip unless the paper shows deliberate malice and intent to harm.

It's too little, too late for the MPS in the eyes of citizens; illegal phone tapping has been happening for more than half a decade at the largest-selling English tabloid newspaper in the world. But it is a lesson learned about the need to skim away the "special privileges" tabloids are permitted.