All toil and no trouble

The Montgomery Blair players put on their first black box performance during opening night of Macbeth on Thursday. The audience sat on risers that were built on the stage, which made the play cozy and captivating. Thursday's cast put on an intriguing play of murder, scandal and witchcraft.

The black box wasn't the only unusual element of Blair's production of Macbeth. For the first time, Director Kelly O'Conner created two separate casts for the show. Another opening night was held on Friday, featuring the second cast of players. 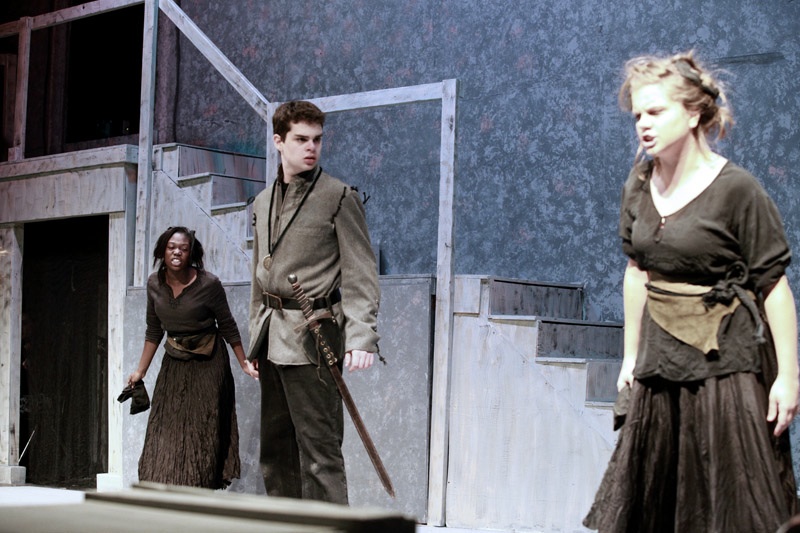 The plot of the well-known Shakespeare play revolves around Macbeth, a general in the service of Duncan, the King of Scotland. Macbeth and his companion, Banquo, are returning from a victorious battle when they encounter three witches, the Weird Sisters. The crafty sisters predict that Macbeth will become the Thane of Cawdor and later King of Scotland. Once Macbeth and Banquo return home, Macbeth is crowned the Thane of Cawdor. When Lady Macbeth hears of the Weird Sisters' prediction, she is excited and persuades her husband to murder Duncan, but the king's murder is only the first of a bloody death trail that follows Macbeth and Lady Macbeth through intense paranoia and hysteria throughout the play.

The many scenes that contain the Weird Sisters, played by seniors Elizabeth Spilsbury and Emili Malatesta along with freshman Amie Idriss, sent shocking fears throughout the audience. Scenes with the Weird Sisters were perfected by use of lighting, which dimmed and sometimes reddened when the Sisters entered the stage. Their performance throughout the play was flawless, particularly during a convincing take on the drinking of "blood" and the rising of the dead. Apart from an awkward scene with a plastic baby doll, the Weird Sisters were a huge highlight of the night.

As Lady Macbeth and Macbeth, senior Emma Kaufman and junior Nick Coffey deliver an enthralling and believable performance. The unblemished delivery of Shakespearean English was a real accomplishment for both leads. Kaufman's sleepwalking scene is extremely well rehearsed and equally well acted; she managed to win the hearts of an audience even while playing a manipulative and power-hungry woman.

Sophomore Peter McNally's role as Macduff is riveting, full of both emotion and personality throughout the play. Senior Alec Wurzbacher offered a solid performance in his role as Banquo, but things got most exciting once Banquo reemerged from the dead, courtesy of the Weird Sisters.

The supporting cast played a huge role for such an intimate production. Sophomore Ian Teixeira (Porter and Seyton) added humor whenever he appeared, whether scolding Macbeth or stammering around the stage, drunk. Juniors Eleanor Tursman and Lea Vanessa Kemda and senior April Berhanemeskel played attendants who added tidbits of comedy throughout a dark and gloomy setting. 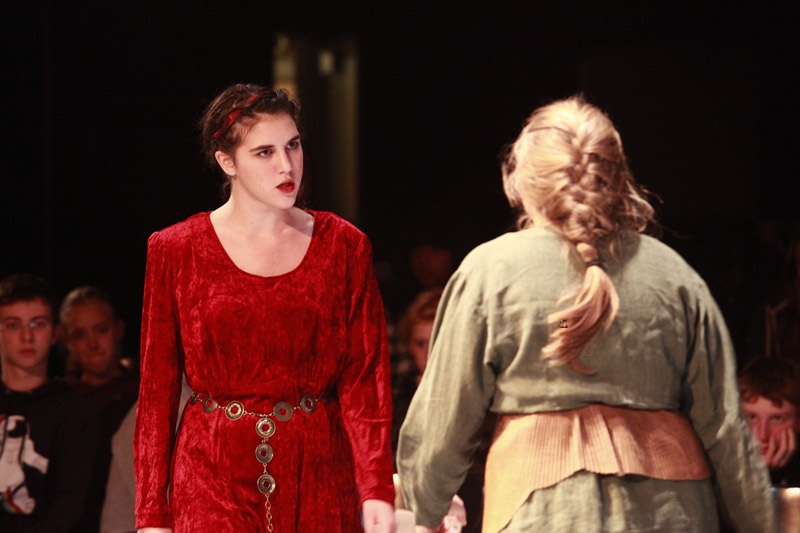 The up-close-and-personal feel of the black box had a drawback in its small size. The fight scenes, for example, did not have enough room to really flourish and emerge. Although the acting during these moments were magnificent, it seemed to be left behind by unclear and confusing scenes.

Because of such an intimate performance and audience, the background was not as important. The setting was a small, unchanging, basic backdrop with stairs, with no way to distinguish inside or outside; however, this made the actors the main focus of the night.

The lighting and music were a highlight of the show as well. Seniors Zoe Kurtz on violin and Matt Volk on percussion provided a sultry and booming sound throughout Shakespeare's tragedy.

Directors Kelly and John O'Connor made several unique decisions throughout the show, and all of these choices helped the show go beyond a normal Blair Shakespeare production. The black box allowed all audience members to truly see and understand every tear and mischievous grin.

The O'Connors also added a small musical number with a dance, which the entire cast performed with a monotone voice. Spilsbury choreographed the dance. The song was sung in Gaelic, to connect to the Scottish setting of Macbeth. This could have gone horribly wrong, but the Blair players were terrific, perfectly executing moves and lyrics throughout the small musical number.

An unusual production for a high school to perform, Blair's production of Macbeth left the audience entranced.