The Montgomery County Public Schools (MCPS) Board of Education is currently investigating Richard Montgomery High School (RMHS) Principal Moreno Carrasco on a possible violation of the MCPS code of ethics for Carrasco's involvement in a private business. Carrasco has been principal at RMHS since 2003, before which he was principal of Eastern Middle School for seven years.

Carrasco leads Executive Coaching Services (ECS) LLC, a consulting service that offers seminars for school principals, according to MCPS Superintendent Jerry Weast's chief of staff Brian Edwards. Carrasco is being investigated for possibly conducting seminars on school time by taking sick leave or otherwise leaving school grounds for ECS purposes. "Whether his other company interfered with his ability to execute his duties as principal is precisely the matter we are investigating," Edwards said. 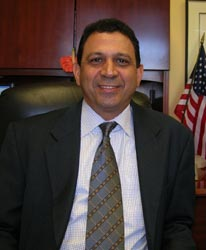 Edwards stressed that the matter was largely confidential, and he was unable to say which charges could be made and what penalties they would carry. "We do not discuss investigations into personnel matters," he said.

The MCPS code of ethics, which the National School Boards Association recommends, forbids employees' involvement in "any employment that would affect their usefulness as employees in the system…that could interfere with their effectiveness in performing their regular assigned duties…or would in any way conflict with their assigned duties."

Carrasco returned to school and resumed his duties as principal on April 24, after eight days of sick leave, according to the RMHS student newspaper, The Tide. He will continue to hold his position during the Board's inquiry. "Mr. Carrasco has never been asked not to continue his normal duties during the investigation," Edwards said.

Carrasco explained his indefinite sick leave by sending a phone call to RMHS parents saying that he was under a physician's care, according to RMHS junior Rebecca Meyer.

Upon his return, Carrasco addressed the school on RMHS's daily announcements system. "He also said that he and his family had suffered a lot of emotional damage from this and that he hopes that the teachers and students of RMHS can return to the 'business' of going to school," Meyer said.

Carrasco was under fire earlier this year for purchasing a $2,300 golf cart with RMHS athletic department funds in March, according to RMHS Parent Teacher Student Association (PTSA) President Kate Savage. Carrasco claimed that the cart would help him supervise students during RMHS's open lunch. The Parents' Coalition, among others, criticized the purchase as an example of misuse of funds during a budget crisis, according to The Tide. Edwards said that the Board did not investigate the golf cart purchase.

The RMHS PTSA voted to publish a letter in support of Carrasco regarding the current investigation, according to Savage. The PTSA encouraged the RMHS community not to jump to conclusions on Carrasco and to wait until the investigation concludes on a yet to be decided date. "The matter remains under investigation," Edwards said. "I do not have a timetable for the conclusion of the investigation at this point."

The letter of support was approved on a unanimous vote, according to Savage. "My concern is that the school and its students continue to be successful despite the distraction of this issue," Savage said. "No 'charges' are against him [Carrasco] to my knowledge."

Carrasco's actions have led to strong opinions from students - generally negative ones. In a poll on The Tide's web site, nearly 50 percent of students called the golf cart "a symbol of administrative excess," while over 40 percent called it "hilarious." Less than five percent called it "a helpful administrative tool." Meyer recalled seeing a flyer outside the school reading "Mo Carrasco, Mo Problems."

Edwards could not predict when the investigation would conclude, as the Board has not made much information public.