Alumni Hall lives up to its name

The Blair Alumni Association inducts eight new members into their Hall of Fame and celebrates 85 years of Blair.

On Saturday, Nov. 2, the Blair Alumni Association hosted an 85/20 anniversary, 85 years of Blair and 20 years at the University Boulevard campus, to celebrate the history of Blair and induct new members into the Alumni Hall of Fame. Former Blazers gathered in the SAC and Alumni Hall (commonly known as the Auditorium) to partake in the commemoration.

The event began with an open house and VIP Hall of Fame reception in the SAC from 5 - 6:15 pm, followed by the Alumni Hall of Fame inductions in the auditorium from 6:30 - 10 pm.

The night’s overarching theme was "One History. One Legacy. One Blair," with both the opening and closing speeches addressing the unnecessary divide between the former Wayne Avenue campus and present University Boulevard campus. "The idea was to keep the connection. It didn't matter which campus you went to; it says Montgomery Blair on the front, and that’s what’s important,” Chair of the Alumni Association Mark Levin stated.

The induction ceremony commenced with a quick preamble from Principal Renay Johnson and Levin, and transitioned into a presentation of the Shoop Shoop song from the Blair Drama Club’s production, "Return to the Forbidden Planet." 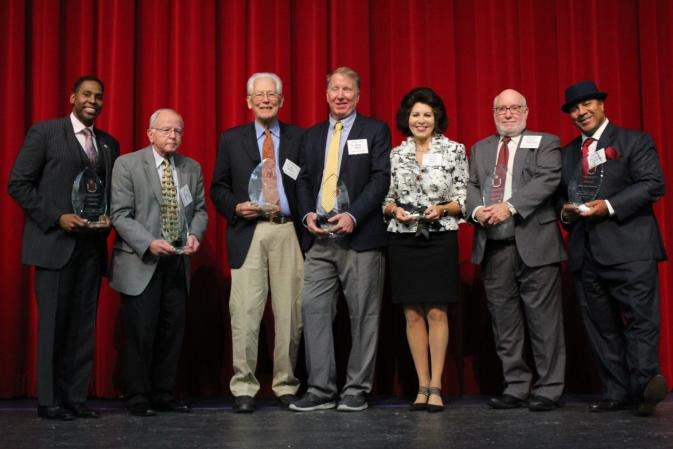 Photo: Alumni still present accepted their inductions to the Hall of Fame

Photo: Alumni still present accepted their inductions to the Hall of Fame

Spanning politics, sports, science, business, and art, the Association deemed that these newest inductees deserved recognition for being "talented, accomplished and impactful" in their diverse professions. This recognition stemmed from actions such as driving buses for disabled children, entertaining the public, and constructing cultural centers such as Strathmore Hall.

After brief introductions of each inductee, the audience watched a short video consisting of compiled interviews of close friends and family describing the inductee and reasons they were chosen for the Hall of Fame. The videos were compiled by Alan Goldberg from the Blair class of 1961.

If present, the inductee or a family member then gave a speech about Blair’s impact on their lives going forward and accepted the award. These speeches often referred to fond memories of friendship and what Blair as an institution stood for when they were in school.

Another notable occurrence that encapsulated the night was the similarity between the various graduation classes despite the number of years separating them. “I think more and more that we do these kinds of things, the generations come together. It was interesting to hear somebody that graduated in the 50s talk about the same environment as the guy who graduated in the 90s did,” Levin said.

Many alumni reconnected with others who attended Blair and reminisced about their high school years. “it’s very awe-inspiring to see folk all these decades later [who] just feel so passionate still about their time at this school,” said Social Studies resource teacher Rahman Culver, who graduated in 1996.