Last Thursday saw the biggest moment in soccer for the Washington area since Freddy Adu, as British superstar David Beckham suited up for the Los Angeles Galaxy to take on DC United in his regular season debut. League execs hope that the presence of an international superstar of Beckham's caliber will be a turning point for the sport, as soccer establishes its presence here in the US, taking its place alongside football, basketball and baseball in the pantheon of American sports.

Based on the hype alone, their dream seems to be coming true, as Beckham and family have been the biggest British imports since the Beatles, causing MLS television ratings to immediately double. When the brouhaha dies down though, one thing will be abundantly clear - America and soccer just don't mix.

Beckham's debut in DC was unspectacular, to say the least, entering the game as a substitute in the 71st minute. Although he did make a few nifty passes, Beckham was unable to reverse a 1-0 deficit, one that would eventually prevail. Sure, he's still nursing a lingering ankle injury, but for all the hoopla, the results were disappointing.

It was more of the same as his debut a few weeks ago, when Beckham played just 12 minutes in the 1-0 primetime exhibition loss to Premier League powerhouse Chelsea. The only notable play Beckham was involved in saw him take a fall as he collided with an opposing defender in what was, all things considered, just a typical play. No foul was called and play resumed without a hitch, yet ESPN continued to replay the collision time and again. Catering to a single big name is not going to reverse the misfortunes of a dying sport. 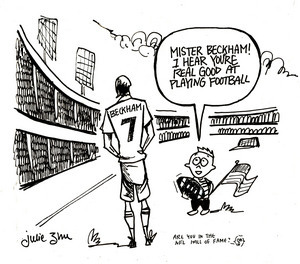 Is Beckham still a capable player on the pitch? Sure, but anything less than a superhuman performance would be a disappointment. To expect him to single-handedly carry the LA Galaxy and the MLS into national prominence is absurd, even when healthy and in his prime. Soccer is the consummate team sport, where it is near impossible for a single player to carry a team in the manner of say, Michael Jordan. Even during his glory days, which were about ten years ago, Beckham himself was not a goal scorer, but a creator, a team player whose influence was not always conspicuous.

Beckham may very well be better known for his pop star wife and celebrity lifestyle than for his play, which has been on the decline for many years now. Indeed, during the telecast of his premier, it seemed that more attention was paid to Victoria Beckham and the various celebrities in the stands than the actual game action. One begs to ask, were the thousands of Beckham jerseys the mark of newfound Galaxy supporters and American soccer fans, or just another insipid fashion statement? Is this really what soccer has come to in America, a novelty act, a celebrity spectacle?

In many ways, professional soccer and America are just not compatible. The mindset of the American sports fan is not suited to the game. For the average American sports fan, soccer has connotations of minivans, juice boxes and cheap plastic trophies, not the world's most popular sport. Even to a true American soccer fanatic, the MLS with a name like Beckham is still not very enticing.

Let's face it, in the realm of professional soccer, what we have here is third rate, if that, on the same stratum as arena football or minor league baseball. The typical player is either washed up or just not good enough to reach the next level. America is home to the top levels of professional athletics. The NBA, the MLB, the NFL and even the NHL are all considered the global pinnacles of their respective sports. One aging upper-echelon player is not enough to lift a mediocre league, no matter how fashionable his wife may be.

The vast gulf between the MLS and top-level leagues are most striking when comparing payroll. This summer, the rights for world-class striker Thierry Henry were transferred for £16.1 million, or about $32.8 million. The total base payroll for the entire league, including Beckham's $5.5 million, is just over $37 million, according to The Washington Post. When a single world-class player is worth about the same as an entire league, we know the product is far from superlative.

Upon honest reflection, the flaws of American soccer are quite clear. Frankly, the game is flat-out boring to watch. Of all the major professional sports, soccer has the longest periods and the lowest scoring, not the greatest of combinations for the entertainment dependent, video-game bred American public touting its miniscule attention spans.

In American football, a low scoring match is a gutsy defensive showdown, the mark of a championship team. In baseball, it demonstrates a rare pitching gem. In soccer, it merely indicates business as usual. Even at the highest levels, like the World Cup or the top Euro leagues, the game is plodding, with a few spectacular plays interspersed with monotonous minutes of inactivity. The water-downed talent level in the MLS bodes for even more of a snoozefest.

This past June saw the lowest rated NBA Finals in history, as the San Antonio Spurs unceremoniously defeated the Cleveland Cavaliers in four games. Why? A matchup between two defense-oriented teams made for low-scoring, boring contests. The Spurs are probably the best all-around team in all of sportsdom through the past decade. Yet fans don't want to see solid defense and teamwork so much as highlight reel plays and high scoring action. Is soccer up to the challenge? It looks to be a difficult road ahead.

If the sport can overcome the soccer mom stigma and bring forth an entertaining product, then perhaps America will join the rest of the world as soccer fans. Who knows, perhaps a healthy Beckham can indeed be the savior of the sport. For now though, the MLS stands on the same tier as the WNBA: a small-scale, low-level league with nothing more than a constantly shrinking niche audience.