A five-day workers’ strike for higher pay at American University (AU) ended on Friday after the union, representing staff, accepted a tentative deal from the school. The details of the deal have not been released yet.

The strike began on Aug. 22 after negotiations between Service Employees International Union (SEIU) and AU stalled during a meeting on Aug. 18.

Staff member Alex explained how the strike originally arose. “We went out of our way to set up an additional meeting to talk to [AU administration], and they simply said no, so we said, ‘Okay, we’re going to strike,’” Alex said.

Strikers began in front of the Katzen Arts Center, and then marched down to Bender Arena, where convocation for new students was taking place. About half of the students expressed their support for the protest during the convocation by walking out and joining the strike. Afterwards, hundreds of them joined the march as it made its way to AU President Sylvia Burwell’s house, where the protest remained for the rest of the day. 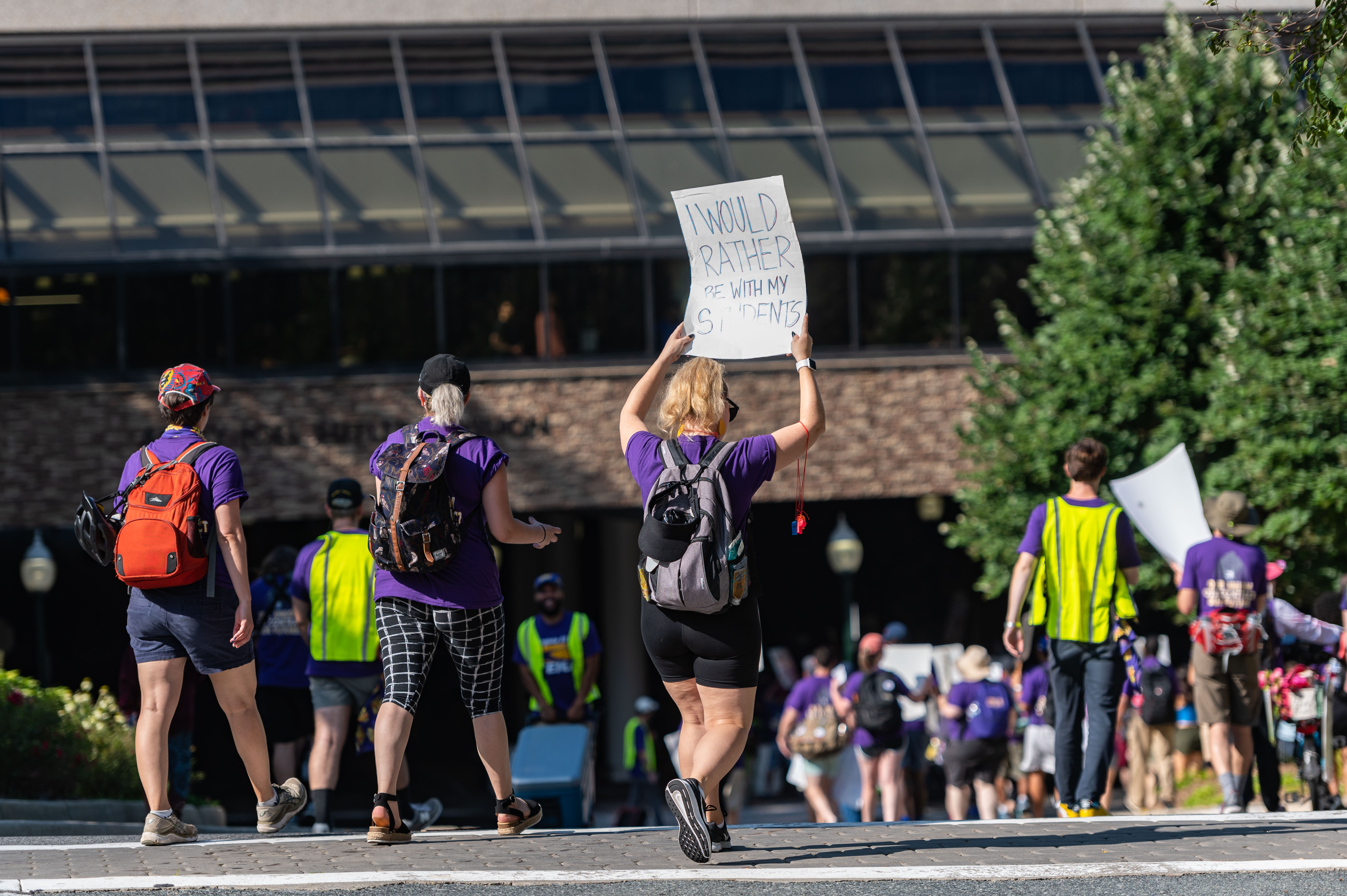 Freshman Ethan Goodwich was one of the many students who joined the strike upon leaving convocation. Burwell was met with shouts of “pay your workers!” and boos as she prepared to give her speech to the class of 2026. “As soon as she tried to speak, we booed and we all walked out,” Goodwich said.

Although the staff working at AU were the only ones striking, many faculty and students also expressed their support by wearing purple shirts to the event and attending the strike. A day before it was to take place, however, AU disinvited faculty from the event.

Problems with underpaid staff have long existed, according to Mirashay, a staffer who led the strike. “I think [the union] was definitely amplified during the pandemic…we had to change a lot of things, and a lot of people didn’t get paid more for doing that,” Mirashay said. During the pandemic, the president got a 9% pay raise, while the pay for staff stayed the same. The demands of the strikers reflect this, since they demanded that all workers be paid no less than 40k a year, and have a 5% pay increase the following year.

Shed, a staff member working at the teaching center, joined the strike to support other staff who are more affected by the low pay. “I have colleagues who can’t afford healthcare, who are making less than $40,000 a year… some people don’t even make enough to live by themselves as adults,” Shed said.

Freshman Blake participated in the strike to aid the union. “We need to help [staff] so that they can help us, [because] they don’t want to be doing this, they want to be teaching us,” Blake said.

Editor's Note: Shed's full name has been removed per a request for anonymity. No changes have been made to the original story.

Editor's Note: Where only first names appear, names have been changed to protect the identities of the sources.


Gabe Prevots. Hi, I'm Gabe (he/him), a senior at Montgomery Blair High School and the features editor of SCO. I enjoy biking, video games and correcting minor mistakes in my stories. If you find any, let me know! More »