Among the fast and furious

"On your mark, get set, begin." Heads bowed in intense concentration. Pencils flew across papers. Packed together like the squares on a crossword puzzle, ambitious solvers hunched over the puzzles in front of them, scribbling furiously. The air was dense and thick with concentration, and the scratching of pencils on paper was the only sound that penetrated the silence. The clock ticked.

Blair Magnet teacher David Stein sat in deep focus, glancing at clues and scrawling letters into empty squares, one by one. A man near Stein stood up abruptly, his finished crossword in hand. Stein tried to ignore the finisher as he stared intently at the last two empty squares on his crossword. Others got up. Stein got distracted. More and more solvers stood up as Stein frantically scanned his brain for the missing letters, his stomach churning with nervous anxiety. 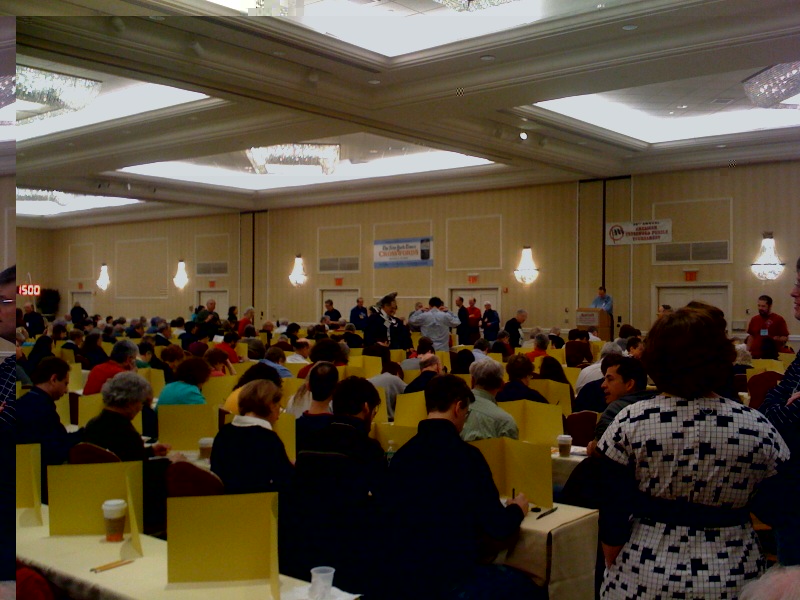 While some may consider crossword puzzles all fun and games, the atmosphere at the 32nd Annual American Crossword Puzzle Tournament from Feb. 27 - March 1 in New York City was not always so blithe. Representing Blair, faculty participants Stein and fellow Magnet teacher Robert Donaldson remembered most aspects of the competition as nerve-wracking and intense. "It's a high-pressure situation," Stein said. "You're in a conference hall of 700 people with some of the best solvers in the world, and some take only two or three minutes to solve the puzzles!"

Donaldson also attested to the anxiety. " I knew I was going to be out of my league," he said.

Both teachers competed for the first time in the oldest and largest crossword tournament in the country, founded by New York Times crossword editor Will Shortz. After completing eight crosswords, participants were scored based on accuracy and speed. Stein placed 66th out of the 178 rookie competitors, while Donaldson ranked 150th. Out of the total 675 puzzlers, Stein was 377th while Donaldson placed 616th.

"Stein is two or three times as fast as me," Donaldson admitted good-naturedly. "It was fun to see him do so well."

Donaldson partially attributed his own performance to the apprehension he experienced during the competition. "It's very nerve-wracking," he remembered. "I couldn't recall things that I knew I knew."

As dedicated members of the Blair Puzzle Project, both Stein and Donaldson had ample experience to draw from. They, along with social studies teacher David Swaney and Network Administrator Peter Hammond, practice crosswords everyday in the computer lab during 5A lunch to hone their skills and enjoy collaboration with fellow puzzlers.

But even this practice did not prepare them for the high level of expertise among some competitors, which made the tournament slightly overwhelming. "Especially among the experts, it was very tense," Donaldson recalled. Some people took only two or three minutes to complete a crossword puzzle. "It's exciting and amazing seeing some of those people," Stein said.

Even if Stein had all the crossword answers in front of him, he believed he would not be able to complete the puzzle fast enough to beat some of the especially skilled competitors. "I no longer think of myself as fast," he said, half jokingly.

Despite the intense competition among some, the Blair puzzlers found many of their opponents to be amiable. "It was a blend of great competitiveness and everyone being friendly," Donaldson remembered. Stein agreed. "There were only a few people there who really had a chance at winning, so it was just fun going to be around others who share that particularly weird obsession."

Stein and Donaldson were also lucky enough to sit by fellow first-timers, which made the experience less overwhelming. "It was fortunate that the people near us were also rookies. We commiserated about how hard everything was!" Donaldson said smiling.

Stein remembered one particular crossword that gave him trouble. The clue read, "Did above average work," and Stein had already filled in the first four letters of the five-letter puzzle with G-O-T-A__. He filled in the last space with an "S" so the entry read "Got As" because he recalled his students' complaints when they received B's. In fact, the correct answer was "Got a B."

"The students' problem is they don't think B's are above average," he said, poking fun at his high-achievers.

Despite this slip-up, Stein was generally happy with his performance at the competition. "My goal was to get in the top 50 percent, and I met that goal [among rookies]," he said. Out of all 675 competitors, Stein was also close to ranking within the top half of scores. "That's not bad for the first time," he offered.

Although Donaldson was not as satisfied with his own results, he maintained that the overall experience was worth it, especially being able to meet founder and puzzle master Will Shortz. "I just enjoy doing puzzles, the excitement in the air, shaking hands with people who are famous in the subculture of crossword puzzles," he said.

Regardless of his ranking, Donaldson has improved substantially. He used to spend the majority of the week puzzling over the Sunday crossword, but now he completes it within an hour. "You only have 45 minutes at the competition, though," he said.

So is it worth Donaldson's efforts to try and shave off 15 minutes of his time for next year's tournament? "It depends on whether I've improved. But I will need to improve a lot before I will be happy," he said. Stein, however, is sure that he will return for the vigor of another competition. "Next year, though, I have to do better," he said, with a plotting smile.