In the action movie department, "Sahara" is pretty mediocre, though it has all the prerequisites: a fast-paced storyline, exotic locales and ridiculous amounts of explosions and gunfire. "Sahara" even includes the stock protagonists: Matthew McConaughey as the hunky Boy Scout/alpha male, Penelope Cruz as the gorgeous babe and Steven Zahn as the flunky sidekick. 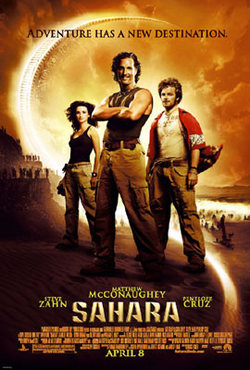 Unfortunately, the stock characters and action movie requirements overwhelm "Sahara," and the desert-centric action flick is left with no heart; it becomes just another big-budget action flick.

A good, exciting action movie is chock full of zany, diamond-in-the-rough characters. It also has a reliable, but not predictable, storyline that follows the rules of continuity, a writing device that protects against plot holes. A well-made action movie does not have to rely so heavily on special effects to create suspense. "Sahara" does none of these. Instead, it follows the rules studios make in order to create low-quality products in the fastest amount of time to get the greatest profit margin.

In "Sahara," McConaughey plays an ex-Navy Seal who hunts for a rare Civil War boat with his not-as-attractive buddy (Steven Zahn) from kindergarten. Along the way, McConaughey "coincidentally" runs into the charming doctor Eva (the lovely, desirable Cruz), whose mission miraculously allows the two young, attractive 20-somethings to comb the Sahara desert for a cure to a disease that could possibly destroy the world's marine ecosystem and thus end humanity.

The ridiculous hijinks of buddies McConaughey and Zahn plague "Sahara." For example, in attempts to outrun officers, the two ex-Navy Seals play cat and mouse on yachts in the middle of the Niger River, Africa. In order to exterminate the pesky officers, McConaughey concocts a coup-de-grace that results in a perfectly synchronized sequence of explosion and death. The writers who brainstormed the explosion and death sequence must have lost their minds; after the already ridiculous storyline, anyone who believed the sequence should be awarded the Medal of Distinguished Imagination.

All right, whining about and scolding big-budget studios is not productive because Hollywood is going to continue to pump out these horrible, tepid action movies if the public continues to pay $10 or so to watch them. America, these, days is so accustomed to bland, mediocre action movies like "Blade: Trinity" and "Elektra" that the good people of the U.S. have forgotten what a good, exciting action movie is like.

No one will remember "Sahara" in 10 or 20 years so do not bother to check it out this weekend. Instead, consider viewing Robert Rodriguez's titillating and stylish "Sin City" or Todd Solondz's witty and sardonic "Palindromes" this weekend. These two titles have more brilliance than the hot sun beating down on the arid desert of "Sahara."

"Sahara" is rated PG-13 for action violence and explosions. Playing at area theatres.