An "embodiment" of the freshman class

After sleepless nights, constant anxiety and figurative heart attacks, Americans can breathe easy once again because the election result is in. Daniel Jones, an Eastern Middle School graduate, is the official 2013-2014 freshman class president.

This ambitious, hard-working politician prioritizes his constituents. "I want to help you out, freshmen," Jones urges. "Feel free to talk to me." In return, Jones has a simple request: "It'd be cool to be called Mr. President." 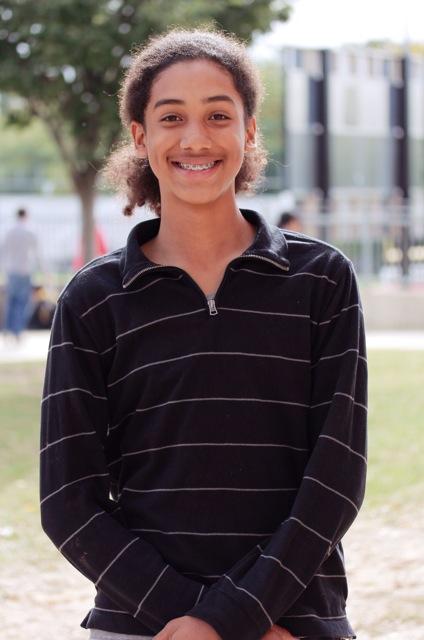 Jones's primary role for his first year in the "Oval Office" is to fundraise for freshman merchandise, such as t-shirts, through bake sales and selling pizza. He has already helped prepare for spirit week, which he deems a critical point in a student's first year of high school. "I want spirit week to be fun and engaging so that the freshmen can look back on it when they're juniors and seniors and say, 'Hey, I had a pretty good start at Blair,'" he says. Jones vouches for students to have a strong, optimistic beginning to high school. "If you start off badly, that carries on to all three years. But a good start makes high school look more positive."

His journey to the "White House" commenced with a realization that it was time to broaden his horizon and try new activities. "I usually only did sports," he says. "Going into high school I wanted to do something different—I wanted to make a difference in my school. I thought I'd run for president because I feel that I would benefit the class."

Within a few weeks of being at Blair, Jones had the difficult task of soliciting the votes of the hundreds of students in the freshman class. His campaign strategy was to advocate for himself through word of mouth.

Living what he describes as a typical high school life, Jones believes he represents the Blair community. "I'm the embodiment of your average student. I have schoolwork then other responsibilities too. I have to manage my time. That's something a lot of high schoolers—freshmen and seniors—have to deal with."

One of those responsibilities for Jones is football, a sport that provides vital skills for collaboration. "Football teaches teamwork," he says. "You can't play football without being in sync with all of your other teammates. It teaches you to trust the people you are working with and helps get things done."

In the Student Government Association, there is no legislative or judicial branch, meaning all the power is centralized. The possibility of a dictatorship at Blair sparks fear into many; however, Jones assures us that he is no tyrant, or at least he doesn't believe he's one. "I don't like to see myself as a dictator," he says.

Some might feel nervous in the first few weeks following their inauguration, but Jones has no time for apprehension. "I'm president so I have to be ready to lead my class; rally the troops; boost morale. I know that I'm going to help give the class of 2017 a good start."