She has three weeks to live, she's quit her job and has been waiting all her life to learn how to snowboard. What better way to spend the little bit of life she has left than to "blow" all her money?

"Last Holiday," a remake of the 1950 original, is directed by Wayne Wang and stars Queen Latifah as Georgia Byrd, who works in the food section of a department store. After hitting her head on a corner of a shelf, she is sent to the store's hospital center, where the doctor declares Georgia to have a terminal brain tumor. 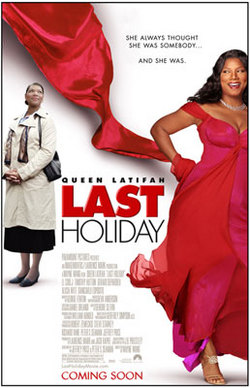 Photo:
Georgia is in shock and denial at first, but she later realizes that she can spend her last three weeks living the high life in the place she's always wanted to go, such as the Czech Republic. But not just the Czech Republic — the extravagant Pupp hotel (pronounced poop).

Georgia leaves her poor town in Louisiana and travels to the Czech Republic, where she reforms her wardrobe from the frumpy sweaters to elegant, flashy dresses, shoes and shirts. Back in her home-town, Georgia had loved to cook, and, one of her idols, the famous chef that works at the hotel, Chef Didier (Gerard Depardieu), just happens to take a liking to Georgia and immediately befriends her.

While Georgia is overseas spending all her money, back home Sean Matthews (LL Cool J), the man Georgia loves, is determined to find her and spend the rest of her life with her. In happy-ending movies such as this, it always works out that both the man and woman love each other even though they've hardly ever talked.

Although Georgia's only got three weeks to live, she seems to be making out pretty well. She's living the high life, meeting and befriending famous people and, to top it all off, she wins about $100,000 gambling. What could possibly drag her down? Oh right, she's still going to die.

This movie is a mix between slapstick comedy, the typical outside activities that go wrong, and Latifah's witty humor and charm. She almost even makes the fact that she's going to die a positive and funny matter. In a church scene before she goes off to the Czech Republic, she breaks out in a song that basically repeats "Why me Lord?" over and over. Latifah starts out singing and crying, but eventually she and the whole church are bouncing up and down smiling and yelling "Why me?"

The scene where Georgia goes base jumping is well lit and the camera angles add to the thrill of the activity. The movie is filled with bright colors that convey the rich life that Georgia enters in the Czech Republic.

"Last Holiday" is the typical, predictable movie because where so many things go right, there's got to be some mistake where the things go wrong. One can almost guess what is going to happen as soon as Georgia says she's going to spend the entirety of her wealth.

For light-hearted moviegoers looking to laugh throughout a movie, "Last Holiday" will not disappoint as it provides many awkward moments to get the audience laughing. But for critical viewers, this isn't really so much a drama about a woman who makes the most of her few remaining days than it is a comedy about how spending a chunk of money in less that three weeks changes a life.

"Last Holiday" runs 112 minutes and is rated PG-13 for some sexual reference.