William Shakespeare's comedies are simple; few plays could be easier to comprehend. Almost all contain the basic elements of misdirected love, mistaken identity and a set of twins, and the combination usually leads to an amazing show. The Montgomery Blair Players did just that, turning out yet another Shakespeare classic in a delightful and interesting performance.

"Twelfth Night," directed by Kelly O'Connor, tells the story of twins, Viola (Zoe Blackbourn) and Sebastian (Nikolas Reineke), who are separated during a storm, each believing that their sibling is dead. For her protection, Viola disguises herself as a man and works under Orsino (Max Lockwood). The object of his valiant affections is Olivia (Anna Szapiro), who refuses to entertain any suitors but eventually falls in love with cross-dressing Viola. What ensues is one of Shakespeare's infamous and comic love-triangles. 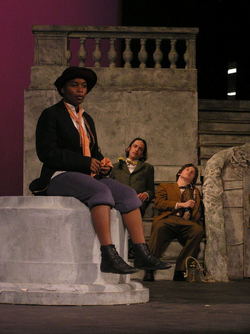 Photo: Freshman Jumi Bello plays a local fool in Kelly O'Connor's production of Shakespeare's "Twelfth Night." The play will run again this coming weekend on Nov. 11 and 12 at 7:30 p.m.

Photo: Freshman Jumi Bello plays a local fool in Kelly O'Connor's production of Shakespeare's "Twelfth Night." The play will run again this coming weekend on Nov. 11 and 12 at 7:30 p.m.

A notable Blair actor featured in the play is senior Joe Lorenz, whose performance as Malvolio, another gentleman with his eye on Olivia, was outstanding. Lorenz's portrayal of the seemingly insane man brought tears of laughter to the eyes to audience. Freshman Jumi Bello also did an excellent job at playing Feste, the local fool. She made even the grimmest of characters and audience members laugh while keeping her character believable.

Although Lorenz and Bello's abilities as true thespians were made evident by intermission, the rest of the cast also turned out great performances, carrying the play along in an entertaining manner. "Twelfth Night" was just as much a tribute to O'Connors's casting abilities as it was to her skill as Blair's foremost Shakespearian director.

Rather than rely on a pre-recorded soundtrack, Newman chose to supplement the play with a live chamber group. Although, at times, the musicians overshadowed the actors, the music was a wonderful addition as period works perfectly complemented many scenes. Most notable was a stirring rendition of the third movement of J.S. Bach's Brandenburg Concerto No. 3, giving the play and night a solid and charming conclusion.

The costumes in any performance can either make or break the show, and those in "Twelfth Night" did not disappoint. Although costumes from multiple time periods are usually a recipe for disaster, costume designer O'Connor was able to incorporate multiple designs into the play without disrupting the historical setting. Among other costume designs was Malvolio's silk robe with a matching gold-checkered vest and yellow argyle socks.

Bringing to life the words of a play is the actor's job, just as creating a realistic atmosphere for a play is the job of the stage crew. John Kaluta, the stage crew sponsor, did just that, creating a universal set that awes the audience. Using the simple theme of grey stones, the set is detailed and extensive. Rather than hinder the actor's movements, Kaluta's set maximizes each thespian's space, giving them physical freedom. Not only this, but the set is ingenious, incorporating all the requirements of the scenes in one general set.

All performances have their ups and downs, regardless of the skill of the actors, the quality of the music and the beauty of the set. Despite only miniscule mistakes, the Blair Players were able to pull through with another entertaining Shakespearian classic. After the final curtain call one thing was abundantly clear: O'Connor, or Newman as some her students might remember her, is back and means business, Shakespearian style.