An evening of Russian and English culture 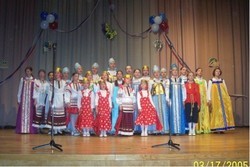 Photo: A folk song performed by the students of the Russian Embassy.

Photo: A folk song performed by the students of the Russian Embassy.

The more than four hour concert kicked off with a hearty welcome from a Russian teacher and the head dean, and also an English and drama teacher of the British School, Graham Gamble. Gamble expressed his delight in being able to organize such an event, pointing out that "in school we talk about internationalism and I'd like to think that this evening is internationalism in action."

The night continued with the performance of the first act from "The Cherry Orchard," a play written by Anton Chekhov, a Russian storyteller and playwright. The play follows the life of Madame Ranevsky, who returns from Paris to her home in Russia to find that her house is set to be sold at an auction. Ranevsky is in debt, but does not know how to handle the situation, because money was never a problem for her. As a result, she ends up losing her house and the beautiful cherry orchard that grew in her backyard and was always a consolation for her. 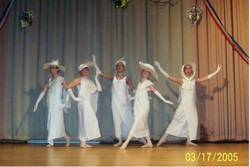 Photo: A dance by the YMCA Ayrlawn Ballet.

Photo: A dance by the YMCA Ayrlawn Ballet.

Then the girls from the YMCA Ayrlawn Ballet in Bethesda took the stage. The girls were wearing exquisite attires - white dresses, completed with white wide brimmed hats and long white gloves. Their performance was followed by thunderous applause.

Right after the ballet group was finished, the Russian actors took the stage, presenting the play "The Dental Surgery" by Anton Chekhov, in which a man comes to a dentist hoping to alleviate his toothache; what he does not know is that the dentist is an ex-convict. Although the play was presented in Russian, the actors did a fantastic job expressing everything they said in motion, which helped even the English students understand what was going on and laugh at the jokes that were made.

Immediately following the play, the students from the Russian school put on another performance, with three girls dancing to traditional Russian music. After the dance, one scene from "Othello," was staged by junior students of The British School of Washington. Then followed a scene from "The Proposal" by Anton Chekhov, which was the last play performed by the Russian students. Act II of "The Cherry Orchard" and a second performance from the Ayrlawn ballet, who danced a traditional Russian dance, were the last two performances before the intermission. 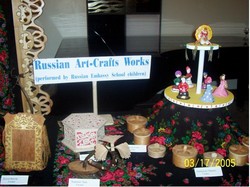 Photo: A display of the art-work created by Russian school students, dedicated to the anniversary of WWII.

Photo: A display of the art-work created by Russian school students, dedicated to the anniversary of WWII.

During the intermission, students from different schools had a chance to interact with one another, as well as check out an exhibition of artwork, prepared by the Russian Embassy school students and dedicated to the 60th Anniversary of the End of World War II.

Seniors Evgenya Babich and Adina Kaliyeva, students from the Russian school, were pleased with the outcome of the concert. "We are truly learning a lot about the British culture and we are sure they are learning about our culture as well. I hope that in future there will be more concerts of the sort hosted," said Babich.

The second part of the event started with a continuation of "Othello," performed by the seniors at the British school. Then the Ayrlawn performed the final dance of the night, with the teenagers dancing the classical ballet. Following the ballet, the final act, Act IV, from the "The Cherry Orchard" was played.

The final event of the night was a song performed by the students of the Russian Embassy - "Childhood" and "Moscow nights." The night ended, however, it also signified the beginning of a new friendship between the two schools that promised many meetings of the sort in the future.

Fidan Karimova. Fidan is a SENIOR!!! She is happy to be a part of the Silver Chips staff, considering that it's the best high school newspaper ever! She would also like to point out that she is one of two Azerbaijani students at Blair and proud to ... More »