An identity wrapped in faith

Prejudice and pride: the search for religious identity

Last month, French lawmakers introduced a bill to ban women from publicly wearing the full-body Muslim veil, or burqa, and other garments intended to cover the face. The bill follows the proposal of a similar bill in neighboring Belgium. French president Nicolas Sarkozy hails the bill's introduction as a move to preserve European values and to promote individual dignity and equality between the sexes. Though the bill's final vote will not be held until September, internationally, the measure is coming under fire. Human rights advocates say the measure would stifle freedom of religion and freedom of expression. Now, the debate sparked by the bill travels across the ocean: In a community as diverse as Blair, do religious emblems still have a place in the public sphere? Blazers of two different religions that require some adherents to wear head coverings - Sikhism and Islam - share their viewpoints on the role of religion in their public lives. 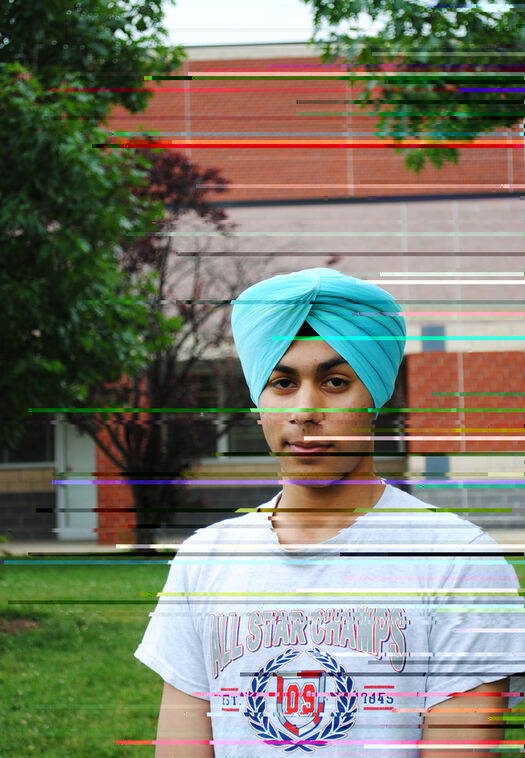 Photo: Sophomore Amandeep Singh wears a turban to comply with his Sikh religion.

Freshman Manpreet Gujral's response to the burqa ban is immediate and strong. "That's wrong," he says. "Anybody should have the right to wear or do something for their religion." For Gujral, the matter is personal: He is a Sikh and he wears a turban.

Sikhism, a religion centered in the Punjab region of India, emphasizes universal equality. Sikhs see the human body as a work of God and believe it is a sin to alter it by cutting their hair. "God gave us hair, so we shouldn't cut if off," explains freshman Atinder Singh, whose hair, he says, now reaches his lower back, though he keeps it covered with a turban. Turbans and other symbols are public indications of faith, symbols that Sikh Blazers wear proudly.

These outward symbols of faith are known collectively as the five K's. Letting hair grow long is known as Kesh. Long hair is usually covered by a turban, or dastar. The other K's are Kanga, a comb worn underneath the turban; Kachcherra, special undergarments; Kara, an iron bracelet symbolizing eternity; and Kirpan, a curved sword. Other than the sword, which is restricted in places like school and the airport, Sikh men must wear the 5 K's at all times outside of their homes. These students and all Sikh men wear these symbols to display their religion. "You can easily recognize we're from our religion from the stuff we wear," says Gujral.

According to Bhai Gurdarshan Singh, the head granthi, or religious official, at the Guru Gobind Singh Foundation in Rockville, the symbols also have a more personal purpose: they remind adherents of Sikhism of their own identity. "We believe the purpose of life is to become enlightened," said Bhai Singh. "The turban… reminds me, who am I, and what is my purpose on this planet?"

Despite - or perhaps because of - the outer markings of their religion, many Sikh people are confused for members of other religions. Commonly, says junior Amandeep Singh, Sikhs are mistaken for Muslims or Jews. "People don't know what we are," says Amandeep. "We are not Muslims. We are Sikh. They are different religions." According to Bhai Singh, this ignorance is common. "People do not know about us," he says.

Although Atinder is Indian, he says he has been mistaken for an Iraqi. People sometimes assume he is a terrorist because of his appearance. Despite the initial ignorance, once he can explain who he really is, Atinder finds that most people are accepting and comfortable with his identity.

Gujral agrees that people are accepting — for the most part. Although he says that intolerance is the exception, it still exists. In elementary school, a classmate tore off Gujral's turban, he says. The two got into a fight, but Gujral reported the discrimination and the other boy was suspended. Outside of isolated incidents like these, however, the boys have mostly found an accepting community in Blair.

Despite their common last name, Atinder and Amandeep are not brothers. Singh is used as a last or middle name for most male Sikhs in honor of a religious leader who lived hundreds of years ago. Sikh women commonly have the surname Kaur. Having similar names reinforces the concept of equality for all, which is a key part of the religion. And, like the turbans they wear, their common last name identifies them with their religion.

For many Sikhs, these indicators of their religion are sources of pride. Others, encountering a less acceptable environment, try to blend in. Amandeep has a friend, he says, who has adopted a Western name in an attempt to fit into his community. Amandeep views this as a bad decision on his friend's part. To Atinder, it represents a loss of identity. Atinder says he knows people who have even tried to assimilate by changing religions. Atinder cannot imagine rejecting his faith in favor of friends. "I would never change religions," he says. In a county where Sikhism is a minority religion, in a country that can be hostile to new immigrants, the choice to wear a turban represents a greater struggle to resist losing a sense of community belonging and heritage. 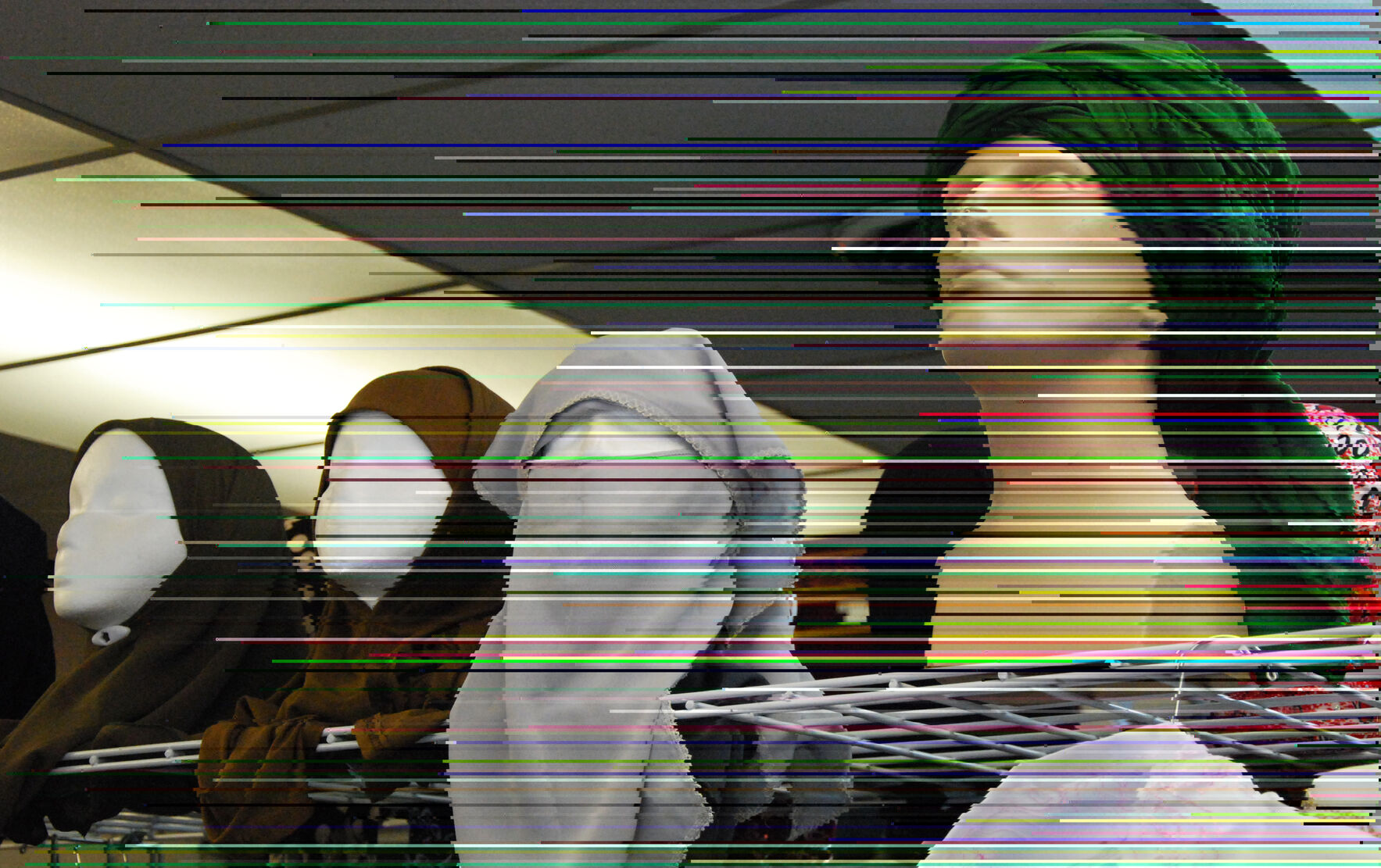 Photo: A turban is displayed at Islamic Garb Gallery. Though these turbans are Muslim, Sikhs wear turbans to cover their uncut hair and to show their faith to the world.

A turban is displayed at Islamic Garb Gallery. Though these turbans are Muslim, Sikhs wear turbans to cover their uncut hair and to show their faith to the world. Photo courtesy of Nick Grossman.

No matter how others may try to blend in, Atinder, Amandeep and Gujral are proud to stand out and display their identity. Both say that no matter the level of prejudice they might face, the turban is too meaningful to take off. Wearing the turban is a way to show respect for God and the teachers of the religion, says Atinder. "It makes you stand out."

Amandeep explains that the religious symbols are part of his spiritual identity and let others know who he is. By wearing these symbols, he tells the world that he takes pride in who he is, no matter what others may think of him. "If a million people are standing there, and you're wearing a turban, it makes you different from the rest," he says.

All three boys are eager to display who they are and where they're from. "I'm proud. Oh, I'm definitely proud to wear it," says Amandeep vehemently.