"Wow." That was White House Press Secretary Robert Gibbs's email message upon learning that President Barack Obama won the Nobel Peace Prize. Obama's right-hand man wasn't the only one in shock - the president himself admitted to being "very surprised" and "deeply humbled." As people around the globe woke up to the news of Obama's achievement, reactions paralleled those of Gibbs and Obama: surprise, astonishment and bewilderment. 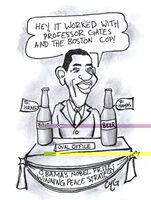 Obama has only been U.S. President for nine months, a short time frame in which to institute sweeping change. Recently, his focus has been directed towards domestic issues, such as the recession and health care plan, rather than world peace. However, the Nobel Committee pointed to the president's nuclear disarmament efforts and use of diplomacy as key reasons for awarding him the prize.

Upon closer examination, Obama has indeed been involved in many of these goals. Beginning with his visit to Prague in April, Obama promoted the Nuclear Non-Proliferation Treaty and called for action against terrorist acquisition of nuclear weapons. International disarmament continues to be on his agenda, as he plans March 2010 and April 2010 summits to discuss global preventative nuclear tactics.

However, while these efforts are notable, Obama's actions have not provided tangible results. It is true that the president called for a "worldwide ban on weapons to interfere with satellites and a ban on testing anti-satellite weapons," but a worldwide ban has not taken place. While the intention is there, intention alone is not enough for Obama - or anyone - to earn a prize as prestigious as the Nobel.

It seems that the Nobel Committee awarded Obama the Nobel Prize based on future potential rather than what he actually accomplished. This is inconsistent with the standards for other Nobel prizes. A scientist who has devoted his life to researching a cure for cancer, yet does not uncover any findings, would not win the Nobel Prize in Medicine. The same principles should be applied to the Nobel Peace Prize. No results? No prize.

Not only was Obama's selection inconsistent with precedent, but it was also inconsistent with the words of Thorbjorn Jagland, the Chairman of the Nobel Peace Prize Committee. "We have to ask is who has done the most in the previous year to enhance peace in the world," Jagland said in Oslo after the Nobel announcement, "Who has done more than Barack Obama?"

The answer: many. Known contenders for the 2009 Nobel Prize include former French-Colombian hostage Ingrid Betancourt and Chinese dissident Hu Jia. Betancourt is a politician, kidnapped by the Revolutionary Armed Forces of Columbia (FARC), a Colombian terrorist group, for attempting negotiation with the FARC in the demilitarized zone in San Vicente del Caguan. Jia is an activist deeply involved in promoting democracy in China, as well as pushing for an environmentalist movement and the prevention of HIV/AIDS. The extent of the pair's devotion to peace is only further indicated by the plethora of awards they have already received, including the Sakharov Prize for Freedom of Thought, the Concord Prince of Asturias Award and the Women's World Award.

In contrast to his fellow 2009 candidates, who have spent their lives devoted to peace and risked their lives to negotiate or promote democracy, Obama is a fish out of water. If and when he implements change with results that aid peace efforts, he should be awarded the prize - not now. It is very possible that three years into his term, he will eradicate Iran's nuclear weapons policy or end the War in Afghanistan. Already, he is on the right track, encouraging better relations between leaders in the Middle East. One day, Obama may make the entire planet sing "Kumbaya." For now, though, it's not his time for the Nobel.