For Jean-Baptiste Grenouille (Ben Whishaw), the protagonist in the European import film "Perfume: The Story of a Murderer," scent is the meaning of life itself. It does not merely interest him, it enraptures him. His unusual sensitivity to all things olfactory takes him out of poverty, but it also makes him obsess single-mindedly about preserving scent. Bottling smell is Jean-Baptiste's sole purpose, his only respite from an otherwise empty life. 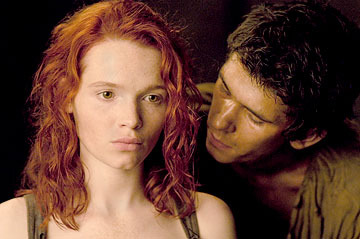 Jean-Baptiste's fascination with smell begins at birth, in a reviling fish market of the 18th century Parisian slums. He is sent to an orphanage after his mother is executed, then sold to a tannery. Upon a chance meeting with a girl in the streets of Paris, Jean-Baptiste's obsession fully manifests as he discovers, to his dismay, that he can't hold onto her enchanting scent.

After a brief apprenticeship with a master perfumer (Dustin Hoffman), Jean-Baptiste settles down in a quaint French village. There, he begins to kill beautiful girls for his collection of scents, from which he plans to make the most powerful perfume ever prepared. His ultimate prize: Laura (Rachel Hurd-Wood), the only daughter of a wealthy local merchant. Jean-Baptiste eyes Laura's otherworldly beauty and decides her scent is the only one worthy of completing his collection.

Playing a character whose emotions are often limited to twitches and blinks, Whishaw embodies the enigmatic Jean-Baptiste admirably. The expression in his eyes is simultaneously intense and vapid, and the way he speaks reminiscent of a desperate drug addict. He plays the role of a villain, but is viewed as a troubled man. Our morals tell us not to like him, but Whishaw makes us feel like we're not actually qualified to judge him in the first place.

The supporting cast is equally formidable, with Hoffman, Hurd-Wood and Alan Rickman ("Harry Potter") as Laura's father. Hurd-Wood stands out as the perfect choice for Laura and does a fine job of separating herself from her previous, less impressive work ("Peter Pan"). She is vulnerable, charming and has that natural sparkle of a future star. Oh, and she's awfully pretty too. Hurd-Wood never overacts, adding to rather than distracting from the unique reserved quality maintained throughout "Perfume."

The nature of a film that centers on smell - the sense most difficult to capture onscreen - necessitates overcompensation with gorgeous cinematography and lavish backdrops. Whether it is rotting fish heads, the crimson hair of a fair-skinned maiden or a biggest orgy ever filmed, the cinematography unapologetically displays both the vulgar and the exquisite to full effect. The Parisian ghetto is as foul as the countryside is pure; no effort is made to lighten the mood or beautify the surroundings. "Perfume" emits integrity, honesty and above all, boldness. The blunt filming is frank, but remarkably elegant. It is, after all, no easy task to make the naked bodies of Jean-Baptiste's victims look tasteful and the stinking ghetto appear stylish.

Director Tom Tykwer handles the explicit and sometimes gruesome scenes with care, taking the time to differentiate "Perfume" from the standard blood-and-gore horror fare. Whenever the story becomes too heavy for even this art-house film to handle, Tykwer balances with a delicate interlude. The best one is a quiet scene in which Laura, clad in a blue brocade nightgown, places a white rose on her mother's gravestone while Jean-Baptiste, wearing travel-stained clothing, hides on the other side, stealing glances at her. It is a model of cinematographic perfection, where every angle shouts that this is not the work of amateurs.

"Perfume" brings back a higher-class horror movie, one that terrifies because of its psychological impact, unlike the mutilation-centered flicks that defile today's box office. It relies on its ideas and meaning, and delivers with subtlety and intelligence.

And if the body of the film was not bizarre and creepy enough, the ending is beyond explosive. Unpredictable and thrilling, it's the rare finale that leaves us hanging without leaving us unsatisfied.

"Perfume" is edgy, and therein is its appeal. The scenes are unsettling and difficult to stomach, but it is far more difficult not to watch. It's a film that holds interest long after you leave the theater, a movie that pushes buttons and takes risks that pay off in a big way. It may be arcane, but it is an absolute spectacle.