He was in the headlines for 55 years, glorified in the fight against Israel and known for violent tactics and hard-line ideology. To some, however, he was a romantic revolutionary, the Middle Eastern counterpart to Communist poster-boy Ché Guevara, and a hero to the Palestinian people. Now, Yasser Arafat's death has left a question mark in the middle of the Israeli-Palestinian conflict. 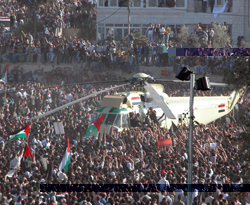 Photo: Mahmoud Abbas steps out of a helicopter at Yasser Arafat's burial in Ramallah.

Photo: Mahmoud Abbas steps out of a helicopter at Yasser Arafat's burial in Ramallah.

In recent years, Arafat's ailing health restricted him from taking an active role in the conflict, but his emotional sway over the Palestinian people is unlikely to ever be duplicated. Even so, instead of looking for another no-holds-barred martyr as they had in Arafat, the Palestinian people have grasped the chance for peace embodied by Mahmoud Abbas, who was elected President of the Palestinian National Authority on Jan. 9. Abbas won with a landslide majority, receiving 62.3 percent of votes cast, while his closest rival, human rights activist Mustafa Barghouti, received only 19.8 percent.

With this election, the Palestinian people had the opportunity to claim the future that they deserved: a democratic state in which they could be free to practice their religion, travel wherever they pleased and live in their homes without the fear of bulldozers or civil violence. During his long reign of power, Arafat had many chances to make the Palestinian state a reality, but unfortunately, his refusal to compromise endangered each offer that Israel and the U.S. put forth. It is now up to both Abbas and the Israeli government to cooperate in creating a safer, more stable Middle East.

Since Israeli Prime Minister Ariel Sharon came to power in early 2001, his rejection of Arafat as a suitable partner for peace talks - a boycott supported by the Bush administration - has created a hostile environment furthered by violence on both sides. In a continuing effort to dissipate this violence, Abbas has already come out in opposition of brutal Palestinian terrorist groups, unlike Arafat, who held a reputation as an authoritative nationalist. Abbas must now use his experience and influence to deter the Palestinian people from roads of violence by publicly denouncing groups like Hamas. He must stress the importance of unity, diplomatic action and nonviolent tactics to break the stereotype of the Palestinian people as suicide-bombing, Koran-quoting fanatics. 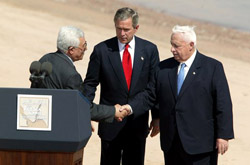 It is also the duty of the Israeli government and the international community as a whole to finally get involved in the Israeli-Palestinian crisis. Sharon and the international community must realize that the Palestinians are not simply a group that can be fenced in, bulldozed and ignored for years to come. This strategy has only led to a Palestinian death toll of 810 and an Israeli death toll of 107 in 2004 alone, according to aljazeera.net. Of those 810 killed by the Israeli army, at least 450 were civilians, and of the 107 Israelis killed by Palestinian resistance fighters, 67 were civilians. Overall, the death toll since 2000 stands at 3,174 Palestinians and 940 Israelis.

The last hope for the Palestinian people are the outside, international efforts of the U.S., the European Union and the United Nations. After a summit with British Prime Minister Tony Blair, President George W. Bush exhibited a desire to "establish a Palestinian state...done in four years." As a major power and Israel's strongest, most consistent supporter, the U.S. should use its influence to adopt an objective role in the Israeli-Palestinian struggle, as the Clinton administration did in Arafat's day. Bush has already taken steps in this direction by promising to help Abbas boost security and the Palestinian economy and by inviting Abbas to the White House after years of shunning Arafat.

Other organizations such as the European Union and United Nations should follow in America's footsteps and resolve to force upon the Middle East the implementation of a new and more viable peace process that will put an end to one of the world's longest and bloodiest conflicts. Aid proposals - such as one Bush is considering that would boost aid to Palestine by $200 million - must be steady and sufficient. However, it is important for all organizations to keep in mind that Abbas cannot be portrayed as a puppet of the Western World.

The Palestinian people must keep the hope for peace alive with a newly elected president, cooperation from the Israeli government and support from international groups. With the first steps of the Palestinian people, their long strife can finally be alleviated, peace by piece.