With the onset of the summer blockbuster season, Universal Studios, Paramount Pictures, Twentieth Century Fox, Warner Bros, and Walt Disney Pictures, among other giant film companies, are maximizing every opportunity to publicize possible hits. They are experts at generating hype for their films, recruiting A-list actors and making a monopoly of the motion picture business. Inevitably, though, their calculated marketing strategies contribute to movie goers' anguish in the form of outrageously expensive tickets. 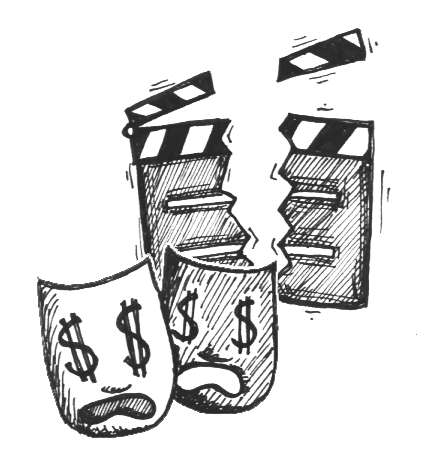 Even with the current economic downturn, ticket prices are skyrocketing. The national average ticket price increased about 30 cents in 2008, with the mean cinema admission price at $7.18, according to the Motion Pictures Association of America (MPAA). And if you frequent local theaters in Montgomery County like I do, you probably purchase tickets closer to $10. You might come to the premature conclusion that soaring admission prices are the fault of the actual theaters. Actually, it turns out that, like consumers, theaters take a hard hit from the real culprit - big-time studio producers.

Mega studios and big-time production companies control box office prices. Right now, companies take up to 70 - 80 percent of a film's first week gross income, according to CNN Money. For example, take newly released blockbuster "X-Men Origins: Wolverines," which made around $87 million opening weekend. Of this money, Twentieth Century Fox has potentially earned $ 70 million. After the initial buzz surrounding the movie's release subsides, theaters progressively get a larger cut of the money. This system forces cinema venues to maintain the high price of tickets weeks after opening weekend, because it is the only way to guarantee profit.

Oh, and thanks to the omnipresent "No Food or Drink Allowed" warning signs at the theater, any snacks you bring into the theater must be purchased at the concession stand, where prices are ever more exorbitant. Drinks now cost around $4, pizza costs around $6 and popcorn costs around $8. But don't blame the little guy – these ridiculous prices are just the movie theaters' attempt to add to the scraps the studio leaves them with. Studios continually end up with an enormous steal, no matter what movie is showing.

Currently, even matinee viewings can't trim the cost of your ticket. They are only about $1 cheaper than regular tickets. So maybe it's time for the lines of theaters across the U.S. to take action and collectively bargain with the studios for a better deal. Then again, perhaps the studios will finally drop prices when they realize that with the introduction of cheap alternatives, such as DVDs and pay-per-view, movie lovers will watch popular films elsewhere. After all, the average pay-per-view price for a film is less than $5.

Bottom line: Silver Chips Online provides stellar reviews on Hollywood's latest releases so you won't have to waste money on films that fail to deliver. Check them out in our Entertainment section.