A union between good acting and the best of Chicago

As far as clichés go, there is nothing cheesier than the typical Hollywood love story. Combine that with a Valentine's Day weekend release, Rachel McAdams and a plot that could have come straight from a Nicholas Sparks novel, it should have been painful for non-avid fans of romantic dramas – emphasis on "should have" – to watch "The Vow." Luckily, however, "The Vow" escapes the usual overly-predictable trap that most romances fall into and leaves viewers pleasantly surprised.

At first glance, "The Vow" is regarded as the love child of "50 First Dates" and "The Notebook" – but without the comedic genius of the former or Sparks's signature tear-jerking plot of the latter. Rather than let that deter him, director Michael Sucsy stuck with his gut, and his serious approach to his silver screen directorial debut turned out to be exactly what the film needed.

Since the movie is based off a true story, Sucsy wanted it to stick close to real events. Consequently, the writers avoided excessive cheap, cliché writing that would turn the plot into a predictable mess and instead kept the audience guessing. As a result, there is a stark honesty about the portrayal of Paige and Leo as the characters have depth and complexities that Henry and Lucy lacked in "50 First Dates". The writers also injected a nice dose of subtle humor that made the movie a bit more light-hearted than what its premise suggests.

However, it's the excellent acting in "The Vow" that makes the writing come alive. While romance film veteran McAdams is perfect (as usual) in her role, Tatum surprisingly emerges as the star of the film. Usually criticized for his lack of expression on screen or lack of impressive acting skills, Tatum reveals that he's improved a bit since his awkward days in "She's the Man" and "Dear John." From tears to frustration to sharing comfortable chemistry with McAdams, Tatum takes audiences on a journey through Leo's raw emotions and pulls on some heartstrings too. Thankfully, most of it was not overly forced. 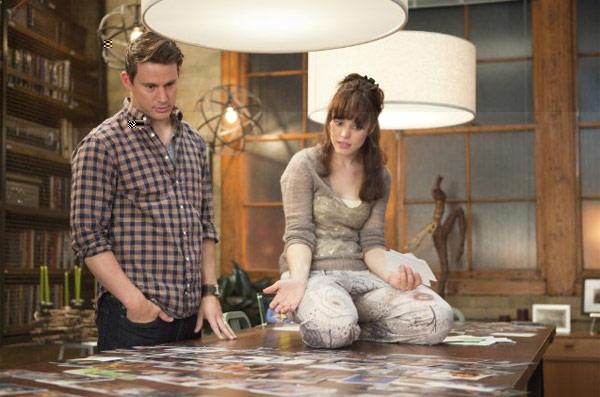 Photo: Paige and Leo try to piece together a timeline of her past to figure out what her last memory was.

Photo: Paige and Leo try to piece together a timeline of her past to figure out what her last memory was.

Aside from great writing and acting, one of the best yet most undervalued parts of the film is the cinematography. Rogier Stoffers proves once again that he knows how to work a camera. The film showcases both the best of Chicago, with its sparkling buildings, sculptures and clean walkways, and the underappreciated side of town, near the smaller apartments where Paige and Leo live. Even away from the glitz and glam of the heart of Chicago, there's still a subtle beauty and a homey feel within that neighborhood that Stoffers is able to capture so wholly with soft fade and pan shots, creating a perfect romantic atmosphere.

Furthermore, "The Vow" surprises audiences by using slow-motion effects, particularly during those defining "moments of impact" that Leo readily describes as turning points in life. By slowing down the car accident and the way McAdams flew through the windshield, Sucsy provides a moment for the audience to take it all in and absorb the enormity of the situation.

As with all productions, the film has flaws. If there is anything that "The Vow" could have done better, it would have to be the trailer, the pacing and some plot details. First off, the trailer is incredibly misleading. Those who expect to see Tatum and McAdams light up the screen and go on numerous dates will be disappointed to hear that there is a larger focus on Paige's past – before she met Leo – and on self-identity.

Moreover, time was hard to keep track of in the film; when you think it's only been a month, it turns out 49 weeks have passed. Other shortcomings included several poor plot decisions by the writers, such cop outs as the doctors' lack of knowledge about brain trauma because every case is "different," or the weird and distracting inclusion of Paige's ex-fiance.

Despite these blips, the overall impression of "The Vow" is positive, especially with the help of McAdams, Stoffers and Sucsy. As a feel-good movie that arrives just in time for Valentine's Day, it definitely makes people itch for a good romance.

"The Vow" (104 minutes) is rated PG-13 for sexual content, partial nudity and some language. Now playing in theaters everywhere.