Although the Blair Community Ice Hockey Team was down 9-2 late in its Feb. 20 playoff game against Howard High School, defeat was far from the minds of the Blazer faithful. This was, after all, a come-from-behind team, a team that had earned its first ever playoff berth after a winless season the previous year.

The almost 200 Blair fans in attendance were undeterred by the lopsided score, enthusiastically chanting and cheering through the game's final whistle. Although the team's season would end in a 9-4 defeat, none of their supporters was seated when time expired.

And none of them seemed to care that they weren't rooting for an actual Blair team. 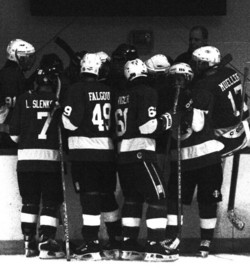 The reason, according to Principal Phillip Gainous, is liability concerns stemming from a lawsuit filed against Blair by an injured ice hockey player "years ago."

In light of the lawsuit, a County committee determined that a team cannot be recognized by its school unless it competes in an MCPS-sanctioned sport. However, this committee needs to reconvene if liability was the sole motivation behind their decision. They've made an unfortunate mistake.

Despite the committee's decision, neither MCPS nor Blair would be put in any legal or financial peril through the recognition of the ice hockey team. Players on the Blair team have their own insurance, and they play and practice on ice rented with private money. Privately owned insurance is an expense Blair hockey players would still shoulder even if the team were offered a club charter.

Compare this to Blair football players, who play on MCPS property and are given the option of buying insurance provided by MCPS - an instance in which players agree to hold the school system accountable for injuries. How this is any less of a financial strain on the county than privately insured athletes playing at privately rented venues remains a mystery.

Furthermore, the ice hockey team's insurance is no different from that of every other sport in MCPS, where, according to former Blair coach William Lindsay, athletes play at their own risk. Said Lindsay, "In most cases, it's understood and hoped that you have some form of insurance." Blair hockey players have their own insurance, just like every Blair baseball or soccer player. Yet unlike baseball and soccer, hockey competes on private property, further lessening liability for MCPS.

However, liability is a moot point since a school can deny all potential legal responsibility for their athletes by having them sign waivers or making waivers a requirement for club recognition. Senior hockey player Graham Mathews thinks this is a fair compromise for the ice hockey team. "It's our choice to play," he says.

Mathews and his teammates are already holding up their end: Before each season, every Blair hockey player signs a waiver with USA Hockey, the organization providing oversight for the league in which Blair participates. The waiver releases all "affiliate associations" and "local associations" involved with the league from liabilities. USA Hockey makes it clear: The player, and not a "local association" such as MCPS, is responsible for his or her own well-being.

Do the right thing

The folly of MCPS' bellyaching over nonexistent liabilities and future hypothetical lawsuits has been enough to convince some schools to reinterpret or simply ignore County policy. Four MCPS schools provide links to their ice hockey team's web site from their homepages. Both Bethesda Chevy-Chase (B-CC) and Walt Whitman high schools also include their ice hockey teams in the school yearbook.

Although B-CC Principal Sean Bulson does not formally recognize his school's hockey team, he has still accommodated them in ways the Blair administration has not. And any recognition is better than outright rejection, especially when the rejected is such a unique part of the Blair community. For the last several months, the Blair ice hockey team has given Blazers a winning product, a team with a devoted following that we should be proud to call our own.

What's more, they have scored their goals and won their games while wearing Blazer red. The administration cannot ignore or exclude a team that takes open-ice hits and body-checks in Blair uniforms, especially when it has asked for nothing more costly or complicated than inclusion in the yearbook and the opportunity to announce game times over InfoFlow.

Although the season is now over, it's both time for the administration to reassess its stance towards the team and for MCPS to reconvene their special committee. There's ample opportunity for them to rectify their mistake this off-season.